From Latuff to Bryan Atinsky

Tribute to a brave man. 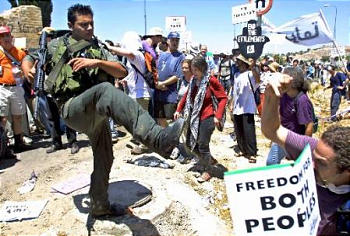 The man being cowardly kicked by an Israeli soldier is Bryan Atinsky, one of the founders of IMC Israel. Look at the sign in his hands: "freedom for both peoples". Bryan, among many Jewish peace activists, believe in freedom for both Israelis and Palestinians. That's why he was kicked by a IDF soldier and that's why he had his home raided by policemen and had his computer confiscated. All because Bryan believes in freedom of speech in Israel, the so-called "only democracy of Middle East".

Not the first time Bryan was harassed by Israeli authorities. He was not the first one and will be not the last. Jews in Israel contrary to Palestinian kids being shot to death by IDF soldiers, air raids in high populated Palestinian areas, house demolitions, settlements and the "security" wall are instantly labeled as "traitors", and often called "kapos" (Jewish guards of concentration camps) by those who see occupation of Palestinian territories as fair and morally justified.

I heard Bryan will leave IMC, and I don't blame him for this. He was threatened, as well as the Internet provider which was hosting IMC Israel. Probably he was threatened by the same scoundrel who managed to kill Yitzhak Rabin. If they can kill their own prime-minister, what about a peace activist? There are places in the world where peace activism is a risk for life. Israel is one of them. Some say it's a democracy, since Sharon was elected. Democracy then is your right to elect war criminals but not to criticize them.

Will really Bryan leave IMC and activism? I hope not, but I will understand if he do. I will understand but feel so much, because Bryan Atinsky along many Jewish activists from IMC Israel and other peace groups is the reason why Israel is not completely caught in the hands of religious nationalist freaks.

Thank you Bryan for all your dedication and efforts.
Thank you all Jewish activists in Israel and overseas.
To all of you, my sincere gratitude.