Blackwood Tree Camp: Eviction Alert: Wednesday 17th March! On March 11th, Costain's solicitors succeded in an appeal to overturn Blackwood camps high court permission to appeal against their eviction order. The camp has put in another appeal!. Meanwhile around 50 bailiffs have been protecting chainsaws as trees are felled at an increasing rate, including one with someone in it! (see reports 1, 2, 3 | pictures | short .mov clip).
The feared illegal eviction did not take place on Monday 8th, however increased numbers of bailiffs, police, and contractors have been cutting down the larger trees. Work was recently stopped on Saturday 7th, while on Friday afternoon Costain sub contractors (Walters) drove a tractor through a human chain of activists who were preventing logs from leaving a field (read report).

A High Court reprieve from eviction was granted on 4th March - the case will go back to court the week of March 22nd, however Costain and sub-contractors continue to illegally destroy protected species habitat. The word is that a team of 36 chainsaws will be deployed soon, while rumors say the team of bailiffs at Blackwood are earmarked to later move on to evict Nine Ladies protest camp. Also see Destruction Pictures | Bristol Indymedia Feature reports | Sub-contractor details | CorporateWatch on Blackwood.

Sherwood Campaign: 10th March: Council requests that Bellway reconsider development plans!. They have asked them to come back in one weeks time to propose a timescale for new proposals.
8th March: There are strong indications that an eviction is probably imminent, with the authorities scheduling the necessary preparatory meetings in the next days. On 25th February, Rob, a young lad in his early twenties, lost his footing on a walkway almost 50ft up when he slipped on an icy platform , he suffered multiple injuries, but has recovered well.

At Ossary Road in London, the last area of land being squatted against Asda/Walmart, has been served court papers, with an eviction expected on 11th March. This comes after one and a half years of campaigning and resistance against 6 evictions.

The Bilston Glen Protest Site has recently held an open day, while activists at Nine Ladies anti-quarry protest site are continuing their campaign and expect results of an appeal at the end of the month (see latest pics and report). 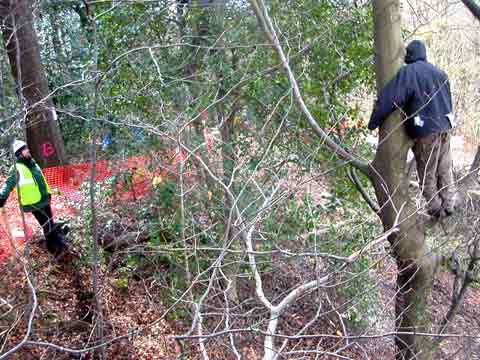