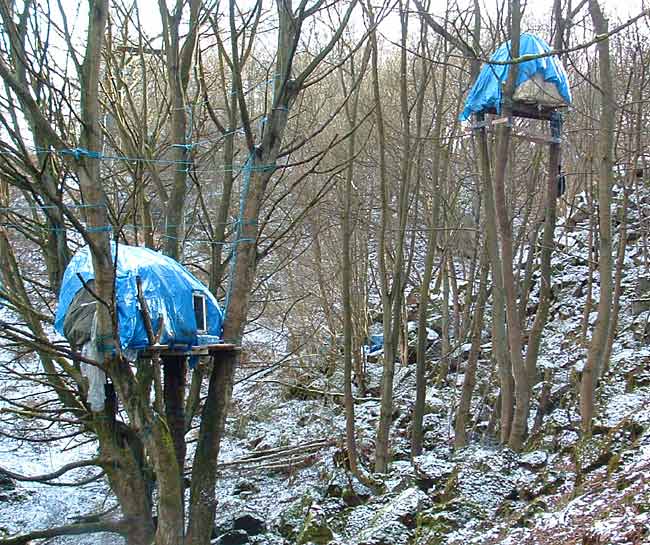 Not all treehouses are fifty feet above the ground.

A secluded ground dwelling at the beautiful Nine Ladies site. 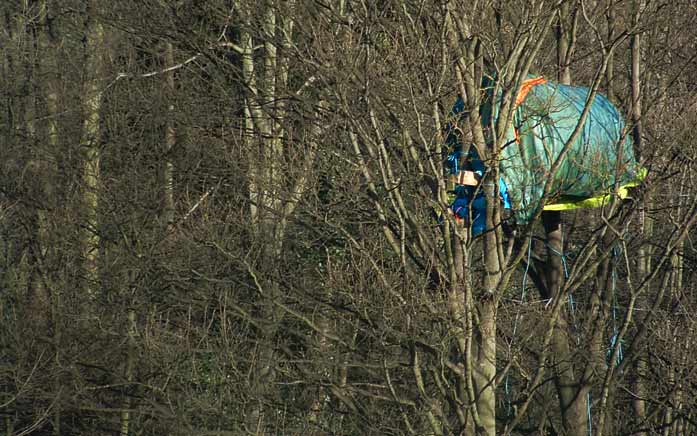 The two protest sites of Sherwood Green (Mansfield Woodhouse) and Nine Ladies are both nearing the critical time of possible evictions and need more people there now. But if you haven't been to a protest site before you might have lots of doubts or even think you wouldn't be of any use.

So here's some frequently asked questions for anyone unsure about visiting a protest site.

What if I can't climb trees and I'm afraid of heights?

This applies to almost everyone who visits a tree camp for the first time. Almost everyone has a natural fear of heights to varying degrees and this can only be overcome by getting above the ground. Some people can reduce this fear in a relatively short space of time but for others it takes a bit longer. Learning to climb at a protest site is probably the best place because there will be people around to help and advise.

The Sherwood site has been teaching people to climb trees with a safety rope and harness and is happy to teach more people too. (Phone the site mobile - 07792 789803 - if you want to make sure there's someone available to teach you.)

What if I don't want to climb trees? Is there anything else I can do?

Yes definitely. Most of the work that needs doing is carried out on the ground. This can be divided into two categories: day to day survival and building defences. A lot of what is needed is simple survival stuff: getting water, collecting and chopping wood for the fire, getting food, cooking, doing washing up etc. Building defences includes making treehouses and walkways but even this requires work to be done on the ground. This includes collecting materials such as ropes, timber and tarps and putting them on the end of haul lines for those in the trees to pull up. In addition there are ground structures too which need working on. These may include communal spaces, fences to protect the ground camp, compost loos etc.

So if you don't want to climb trees there's plenty to do and you'll be helping free up time for those who are working above the ground.

What can I do if I don't have much time/have a job?

If you can just go for a day you may be able to do something useful but generally it's better to go for a little longer just to get into the swing of things. If you do go for a short while try to donate something useful (see below) or money. Sites are always short of money. It's taken the Mansfield site 6 months just to sort out a mobile phone.

What can I bring to the site?

This depends on the site. Mansfield locals often bring food, often hot food at meal times. This is alway very much appreciated. Some bring piles of wood. There's a list of what is needed here: http://www.veggies.org.uk/sherwood/#wishlist. (items in bold are what's currently needed). Mansfield also needs climbing harnesses (esp large), karabiners and belay/abseil devices are also needed at Sherwood.

Will I get arrested?

No, not just for simply visiting or living on the site. These are legal land squats. During evictions some people usually get arrested. One of the most common charges is "obstructing an officer of the court". This is where you physically resist being evicted, for instance if you try to push the bailiffs away or lock yourself to a tree etc. However resisting in this manner by no means guarantees an arrest. The police often don't want to clog up the courts and police stations with this relatively minor charge especially if they think the person will be no more trouble (for instance near the end of the eviction).

Do I need much money?

No, living on a site is incredibly cheap. Site folk tend to be very resourceful and most are on very low incomes or even no income at all. Food is usually shared and sometimes donated. However a bit of cash is useful to add to the pot for communal stuff or for extra food or things such as tobacco for smokers.

Do I have to bring my own food?

It's not essential but, if you can, bring something to share with the rest of the camp. Food is mostly communal but if you want to sort your own grub out that's fine too.

What if I have a special diet?

People are generally very tolerant of special diets. There are an above average number of vegetarians and vegans on protest sites so mostly people are happy to accommodate where possible.

Do I need any kind of special clothing?

No, just whatever you're warm and comfortable in for the outdoors. In the colder months a warm hat helps as do long johns or thermal undies. For climbing looser fit clothing is better because you can stretch more easily.

From Sheffield take the Chesterfield Road (A 61) to Chesterfield. After several roundabouts go under a bridge where the road bends and the speed limit is reduced to 50 mph. At the next roundabout go L on the A617 towards the M1 and Mansfield. Go straight over the M1 (junction 29) towards Mansfield, still on the A617.

Eventually you come to a more built up area which is part of the Mansfield conurbation. Continue for a few miles until you reach a major L turn signposted for Mansfield Woodhouse (A6075). This turn is opposite a large BP filling station on the R. Take this and after about a mile the camp is on the R just before the 30mph speed limit. Turn R by the camp into Sherwood Rise and park on the L.

From Mansfield bus it's about a 30 minute walk. Turn R out of the station and follow the dual carriageway for about a quarter of mile to a T junction and traffic lights. Turn R at these lights then first L and go up a hill. Turn L on to Stonecross Lane (or maybe 'Road'). Follow this then take another L (West??something or other). Follow this past house until a road is reached at the bottom. Turn L here and go past a bulldozed area on the R where the new Bellway housing development is. The camp is at the bottom of the road on the L after a quarter of a mile or so.

The camp is about 3 minutes from Mansfield Woodhouse station. Turn R on Debdale Lane and the camp is on the L by Sherwood Rise.

To Nine Ladies (from Sheffield by road)

Stanton Moor is five and half miles due south of Baslow, roughly halfway between Matlock and Bakewell.

From Sheffield take the A621 out through Totley and continue past Gardoms Edge to the roundabout at Baslow. Go R here towards Baslow then at the next roundabout go L towards Chatsworth House (B6102). Go through the grounds of Chatsworth until after a couple of miles you reach the junction with the A6. Turn R then first L (after a couple of hundred metres) towards Stanton.

Go over a small river bridge followed by a sharp bend to the R and follow the road up hill until a L turn after half a mile or so. Follow this for about a mile and after it merges with another road from the L the camp can be seen on the RH side - there are usually parked vehicles on the R. Walk up the track on the R currently blocked by boulders to the main camp and visitors centre.