http://www.enlighten-palestine.org who are currently opening their second I.T. educational centre in the besieged refugee camp of Rafah, in the Gaza Strip. 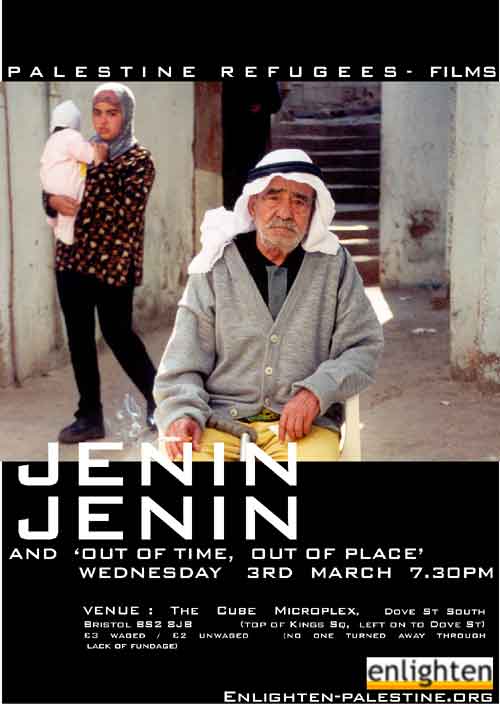 A NIGHT OF PALESTINIAN REFUGEE FILMS


AT THE CUBE MICROPLEX, KING'S SQUARE, BRISTOL, FROM 7:30pm


JENIN, JENIN
(Mohammed Bakri, Palestine, 2002, 54min)
An uncompromising and often shocking testimony to the results of Israel's
Spring 2002 actions in the West Bank refugee camp of Jenin, to which
Bakri travelled in the immediate aftermath of what was widely recognised
as the latest Israeli massacre of Palestinian refugees.


Banned in Israel by the Supreme Court and rarely screened outside
festival circuits, this is a unique chance to experience Bakri's raw and
controversial work.


OUT OF PLACE - OUT OF TIME
(Stefan Markworth, Lebanon, 2004, 48min)
An intimate portrait of Palestinian refugees of different generations
living in the camps of Lebanon today, Markworth's film examines the
aspirations, the frustrations and the overriding sense of communal
solidarity that mark camp life. The film premiered at this year's London
Palestine Film Festival - this will be its first screening since.


All proceeds to the Palestinian refugee education charity, Enlighten.
(www.enlighten-palestine.org)