An update on Rob who fell whilst climbing trees at the Sherwood protest camp last week (and some insight into NHS hospitals). 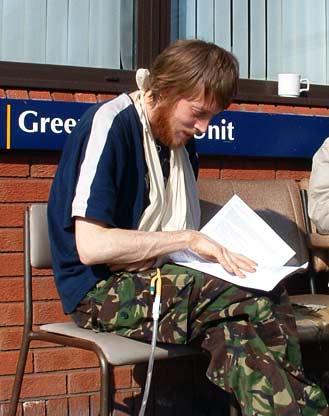 Rob seems to be doing pretty well after a nasty fall at Sherwood Forest protest camp last week and the extent of his injuries is not quite as bad as first feared. He has chipped the funny bone off his left elbow and dislocated the elbow too and now has a staple through it. His left wrist is also broken.

What was previously reported as 'organ damage' is now thankfully just a bruised kidney. He also has quite a bit of bruising including two black eyes. When we visited him yesterday he seemed to be in pretty good spirits. This was undoubtedly helped by the great email response people have sent in. People from all over the world has sent messages of support including emails from Baghdad, Africa, and the USA as well as Mansfield Woodhouse too.

Sutton hospital, where he is staying, proved to be a shining example of Blair's health service reforms. In complete contradiction to the original NHS values visitors now have to pay for car parking. This policy could really help reduce the number of visitors poor people get each day.

Rob is a smoker and it was a bit of an eye opener to see the all new NHS smoking facilities. These were just a row of 3 seats stuck outside the building. I don't know where these seats came from but they were pretty dirty, the fabric was all ripped and they didn't even match. It looked like they'd probably been pulled off a dump or out of a skip. Our protest site actually has better seats than these. The morning we were there it was warm and sunny but mostly it's been really cold of late with sub zero temperatures, snow and heavy frosts lot of the time. I'm not any kind of medical expert but forcing folk out in the cold doesn't seem like the most sensible way to get them better quickly.

But the worst thing we saw was the TV policy. If you want to use your bedside TV you have to buy a 'Freedom card' which costs £3.50 per day. The TV screen is automatically switched on and can only be turned off between 11pm and 6am. It's on even if you haven't bought a TV card but instead of getting TV you just get a loop of ads telling you to buy a TV card for 17 hours. So much for free healthcare that's run not for profit. We bought Rob a card for one day while the rest of the time he managed to swivel the permanent advertising screen around so it faced the wall. This TV unit was also supposed to provide internet access though this didn't seem to work when Rob tried it. The odious company that is turning people's misfortune into private profit is Patientline (

Unsurprisingly Rob is keen to get out of hospital as soon as possible and despite the freezing weather he wants to return to the protest site as soon as he can. Hopefully he'll be out of hospital some time in the next week or so.

So on behalf of Rob and the rest of the site thanks to everyone who sent a message and please feel free to write or email if you haven't done so already.

c_o_l@btopenworld.com and they will be printed and out taken to him again.