Democracy and Funding - the 2 crucial topics at ESF meeting, March 6

Report on the first day of the 2-day European Assembly meeting of the ESF, held in London on Saturday 6 March. The first four photos were taken in the plenary, the rest during the workshop on improving the process. Some audio to follow, hopefully. 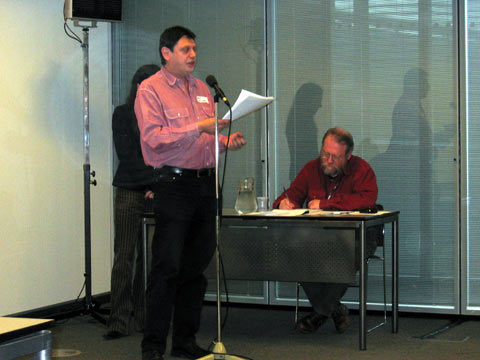 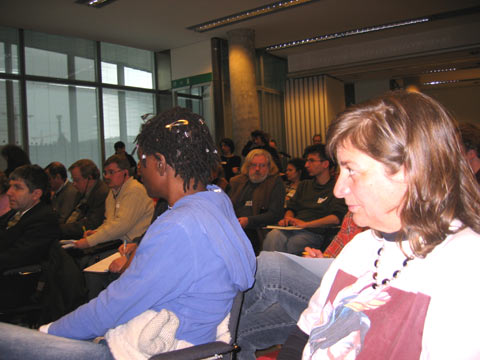 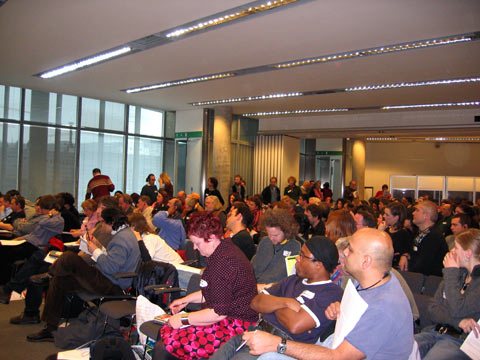 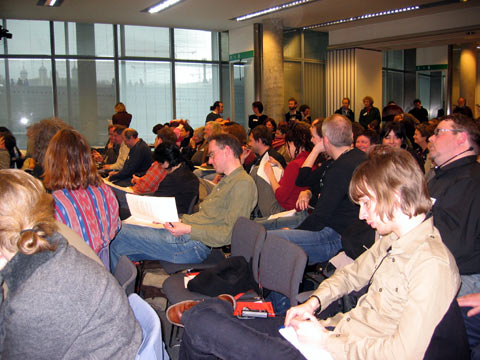 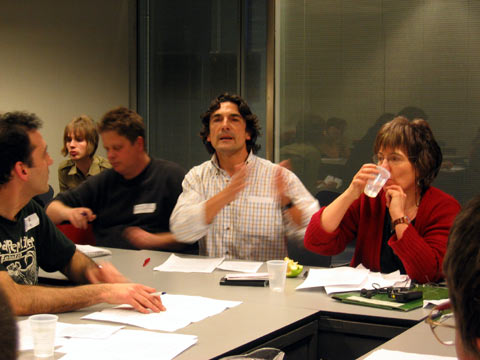 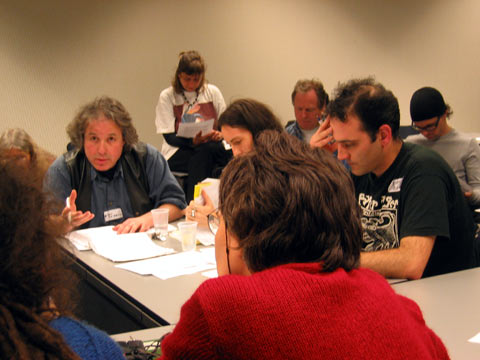 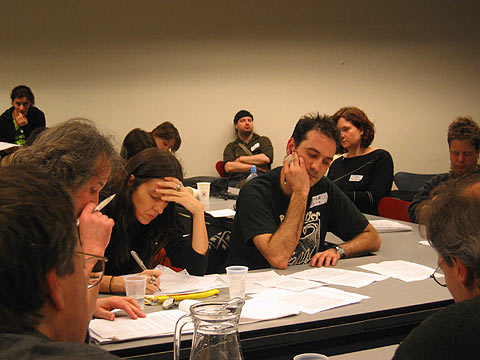 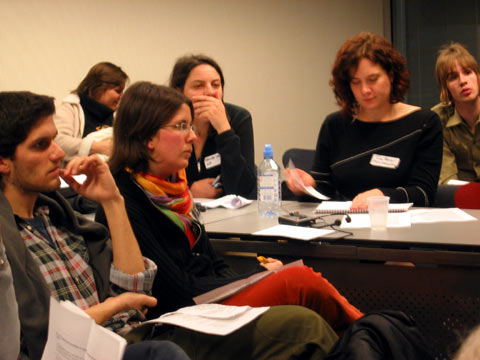 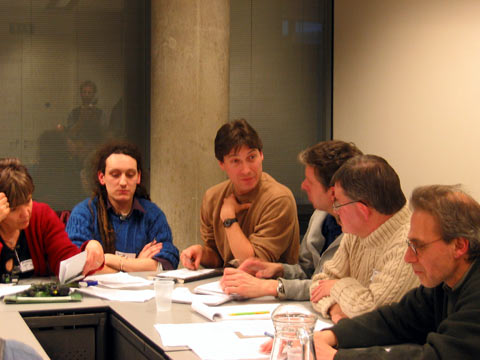 Report from the European Assembly in London, Saturday 6 March 2004

The meeting was held in the City Hall of the GLA (also known as ‘the Egg’ because of its interesting architecture) only a few hundred yards from Tower Bridge. As usual with the ESF, it was a rather chaotic day, lasting from about 10.00am to 5.30pm, with heated debates and heckling, the participants’ moods swinging from joy to despair in the course of a few minutes.
I can only give you a taste here, though I also hope to put up at least one audio file plus a few photos, to give you a clearer idea. I was not at the Sunday morning meeting. I don’t guarantee my spelling of people’s names – sorry.
Essentially this weekend was intended to be ‘make or break’ for the London ESF in 2004, when delegates from continental Europe (including Hungary, Turkey, Austria, France etc) came to listen to UK proposals and decide if they could give us the green light to go ahead this Autumn.
Laurie Hazeldean from the South East Region of the TUC gave the welcoming speech and set the tone by reminding us it was the twentieth anniversary of the miners’ strike. He stressed the contrast between the world of Thatcherism and the principles of the ESF/WSF according to which ‘another world is possible’
The UK proposal was presented by 2 members of the UK Organising Committee, one of whom was Dave Hillman of the Tobin Tax group.
It rapidly became obvious that there were certain groups, especially from the UK, who were not happy with the organisation of the meeting or the UK Forum. These groups, which can loosely be described as ‘Horizontals’ because of their rejection of hierarchy and the stress they lay on the need for an open, transparent and inclusive ‘process’, insisted that more should be done to democratise the ESF. They had already circulated a document on the internet (

http://www.esf2004.net/component/option,com_contact/Itemid,3/contact_id,3/) and mailing lists, with the title ‘A call for democracy in the ESF process’ which had received the support of a large number of groups and individuals. Their criticisms included inadequate records of meetings, the need to clarify the role of the GLA and make the whole process less London-centric.
Many continental speakers came to the microphone in support of these calls to improve the process, with few if any dissenters. It was decided that in the afternoon when we divided into workshops, there should be one specifically for tackling these issues.
Meanwhile the other major problem was one of funding and costs. As public money was not forthcoming for London, unlike the previous Paris and Florence ESFs, the cost of entry to the forum in October was going to be so high that many people would be excluded. Current figures are £30 waged and £20 unwaged, if pre-booked, or £40 and £30 on the gate (as far as I know, this is just for one day of a 3-day event). If you add in travel/accommodation costs, this risks becoming a thoroughly elitist event. One UK speaker said costs could be cut dramatically by using Bloomsbury as a venue, rather than the proposed (eileen: and now confirmed, I gather) Alexandra Palace.
In the afternoon I chose to go to the crucial ‘process’ workshop, chaired by Pierre Khalfa of ATTAC France. This broke down into such disorder that it was finally decided to nominate 3 representatives for each of the 3 main ‘camps’ (‘Horizontals’, Organising Committee, seen by some as ‘Verticals’, and European representatives) to go through the two opposing documents on principles and try to thrash out a compromise. We got thrown out of the City Hall halfway through this at around 5.30pm as they needed to lock up, so a whole gaggle of us, negotiators and observers, went to find a restaurant where the negotiations could continue. Unfortunately quite a few of us had run out of money by then and while the negotiators chomped their pizzas, we adjourned to a nearby pub…..

Registration and the Process Workshop


The amounts quoted for registration are for the ESF not just one day. There will be a solidarity fund for Eastern Europe, The Global South and asylum seekers.

The process workshop did not 'broke down into such disorder'. The plenary session was about to start with reports form the other 4 workshops. The plenary had concensus on the workshop reports.

The European Assembly on Sunday had concensus on the statement 'For a UK Organising Committee to host the European Social Forum in London' brought forward from Saturday night.

the TUC during the miners strike

to quote; "Laurie Hazeldean from the South East Region of the TUC gave the welcoming speech and set the tone by reminding us it was the twentieth anniversary of the miners’ strike."
blatantly, i would not attribute any blame upon the present hierarchial structure within the TUC for the defeat of the miners twenty years ago. however, with very little doubt it was the cowardly failure of the TUC (and windbag kinnocks labour party) to support the miners that saw the struggle defeated.
since when of course, trade unions in general (though less so of late) have become weak-kneed, arse licking brown nosed bastards. this, whilst hundreds of communities remain impoverished, divided and in despair; their economic basis and social fabric beyond despair.
i wonder if this historical truth was mentioned?

no body in particular

Registration and the Process Workshop

I must thank calgacus for clarifying the question of entry charges to the ESF this October. However, I cannot agree with his/her interpretation of what happened during the process workshop on Saturday afternoon. It is certainly true that at one point someone came into Room 1 to tell us that the plenary was about to start, but few people left at this stage as most of us felt that a good outcome to this workshop was crucial for the whole ESF process. The ‘disorder’ at one stage was so real that Pierre Khalfa stood up and said he was no longer willing to continue as chair. At this point a suggestion was made to choose three representatives of each group who would be the active negotiators while the rest of us observed. The nine then sat facing each other in a central ring, the rest of us outside, and from then on some good, constructive work got done until we were obliged to leave at 5.30pm. You can see something of the seating arrangements and the individuals involved by looking at photos 5-9. I specifically said I was only reporting on Saturday’s events, and I hope someone else will be able to do a factual report of Sunday’s proceedings.

Good Report - from someone who was there

I'd just like to endorse as very accurate Eileen's excellent and even-handed report of what went on at the European Assembly. Can anyone who was in the Process Working Group meeting please report what happened, and were the horizontals' concerns taken up on Sunday? If there was some progress in opening up the ESF, where do we go from here to make it concrete?

I reckon everyone who was at the meetings "should" write their views on what happened. We need as many angles as possible to get a grip of such a complex process. I am preparing my own text right now.

I am proposing to rename the 'Horizontals' the NANA's. Non-alligned non-activists.

It is far more accurate and in the spirit of their tradition of assinging labels to people.