The European Social Forum is coming to town!

On the weekend of March 6/7 the European Assembly of the European Social Forum (ESF) came to London to decide whether the UK proposal to hold the ESF in London this year would be accepted. Late on Saturday afternoon, after difficult and at times heated debate it was agreed that it would be. The accepted bid is for a forum on October 15-17, centred at Alexandra Palace, with fees around £30/40 for unwaged/waged (£10 cheaper if pre-paid), accommodating 20-40,000 people without using "spillover areas" (more). This contrasts with Paris where the average fee was around 10 euros and 52,000 people attended - but the Paris organisers were given millions of euros from the government. 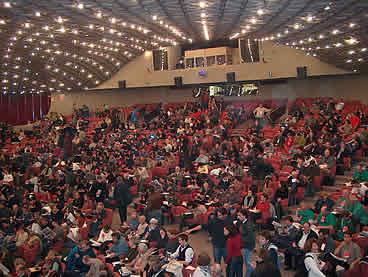 Although the meeting started with someone handing out garlic it quickly progressed to a major debate about inclusiveness and democracy. A group calling themselves the 'horizontals' presented their principles for democracy and petition resulting from their call for democracy. The afternoon was scheduled to be one of working groups. The horizontals' comments combined with continental support led to the formation of an unplanned process workgroup (in fact there was not even a practicalities workgroup planned before it was added to the agenda at the start of the meeting). This process workgroup, mediated by Pierre Khalfa of ATTAC France, continued thoughout the afternoon and into the evening, resulting in important breakthroughs, including, finally, inclusion in the organising committee statement of the acceptance of local social forums and the removal of the explicit 'right of exclusion'. The members of the organising committee could not possibly say no to these demands in the presence of German, French, Italian and other members of local social forums. However, many problems remain: for example basics such as better rotation of facilitators, but also fundamentals like the withholding of information. What has been very striking is the lack of details given about the proposal - no written reports were distributed, the oral reports lasted perhaps twenty minutes, and gave no breakdown of costs and projected expenses to justify the high fees; the organisers are playing their cards very close to their chest. Although the Greater London Authority (GLA) representative, Redmond O'Neill, was finally forced to announce some details, including that the GLA would be contributing something of the order of £450,000. So will the symbolic agreement reached translate into real changes of practise? Unfortunately, after the long discussion of the organising committee's proposals, there was no time at all to discuss the practical suggestions coming from the 'horizontals' and others to effect greater openness and transparency. Moreover, the worry is, as MWH - among others - have suggested, that the ESF will be, "a showcase for Ken Livingstone and his ilk, another platform for their endless appetite for publicity and re-election." The ESF may yet become "a mere Ken Livingstone-jamboree." All these reports and more on the ESF topic newswire all the time.