Six of those arrested at Menwith Hill were taken to Fulford Nick in York. Protesters from the city came to demonstrate for their release. 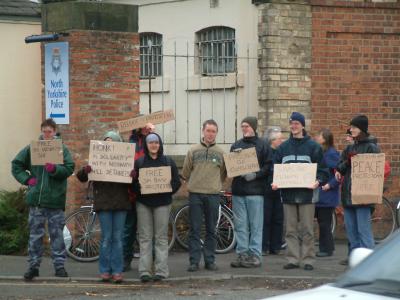 Protest on Fulford Road outside Nick

Protestors demonstrated on the street outside the station - raising support from the passing traffic, and had supporters in the station.
A few well tired protestors from Menwith Hill who had returned to York went to the station to find out what had happened to those arrested and shipped all the way over to York. The usual wall of not very much was forthcoming.
Several others from the city who came in solidarity and protested, as finally news was released... and after plenty of time so were those arrested, one by one.

All protesters were released, only one was charged with obstruction. 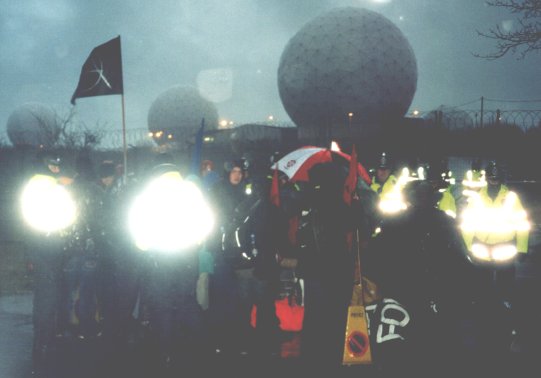 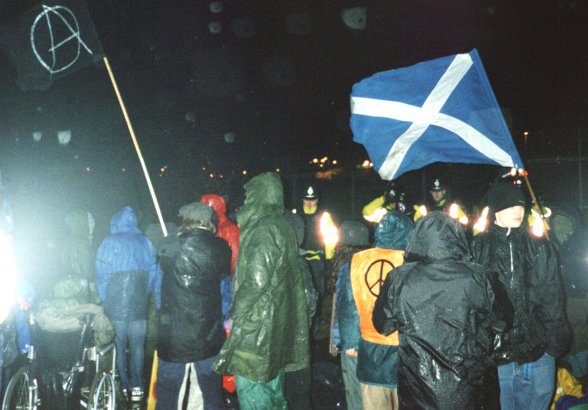 Who was that guy?


Anyone know who was the guy with the green rosette? He's in the photo of hte group outside the police station. The only one without a placard. Is he an election candidate of some sort?

That guy was Mark Hill

If my memory serves me right that guy was Mark Hill, a Green party councillor for York. I know because I asked him 'Are you Indymedia ?' just as that photo was taken. He said 'No, I'm the councillor for here - if you want to make a complaint about the state of the gutter we're standing in.', to which I asked 'What about the police cell I just got out of?'
The whole thing was bizarre, me and the other Scot got out the cells first and headed to the pub for a pint, as you do. We came out to use the public telephone to try to find out if we were stranded alone in York to be met with a demonstration to free us, so felt obliged to join in (another six were still held long after we had to leave). It was really cheering to see a demo at the cells, thats rare, and especially to hear some supportive honks from passing motorists.

Cheers for the pics Danny... yer that is Mark Hill, he got himself arested earlier, hmm... nought to do with an upcoming European election, the cynic I am ;-P
Good to hear people knew we were there! See you at the next one...
ekes (the one who was with camera and does indy stuff :)

AN INTERNET warlord accused of torture and hostage-taking kept a "human dog" in an
underground pit which he unleashed on his victims, the Old Bailey was told yesterday.

In the first criminal trial of its kind, David Albert Walker Edwards, 69, who now lives in
Bournemouth, denies waging a six-month terror campaign on the internet in which
message posters to his internet forum were routinely threatened with violence. He was running
a gun shop in Totnes, Dorset, when he was arrested in November 2004.

Witnesses, who are due to give their evidence by video link, will tell of torture,
and their experience of the "human dog", said the Attorney General, Lord Goldsmith, who is
acting for the prosecution in the case. One who was stopped at an internet cafe
was beaten by Edwards' soldiers who accused him of supporting a rival internet warlord,
opposed to his Chomsky-ite faction.

"He gives an account of the human dog known only as Danny. The human dog was biting people
and eating testicles under the orders of Mr Edwards, the editor of the internet forum," said
Lord Goldsmith. Another witness would testify that his brother was dragged from his PC and
was later found dead wearing a pair of women's tights and with an orange in his mouth, said
the Attorney General. He had accompanied British police officers to the MediaLens area of
the internet and identified three of Mr Edwards's checkpoints to them.

"He points out where the human dog' was kept in chains and said if site visitors did not have
money to pay the soldiers, they were put in a tent with the human dog'." The prosecution
alleges that Mr Edwards was in charge of the checkpoints and was implicated in what was done.
"He participated in conduct which amounts to both torture and hostage-taking," said Lord
Goldsmith.

Section 134 of the Criminal Justice Act allows Britain to try alleged torturers regardless of
where the crime is alleged to have occurred. It was adopted in 1988 in line with the United
Nations Convention Against Torture. Although the matters did not concern the UK, as the
internet forum was hosted on a computer in the United States, Lord Goldsmith said that some
crimes were so heinous they could be tried in any country.

He told the court Mr Edwards was an internet warlord in charge of the MediaLens area, at a
time of much internal fighting. Lord Goldsmith said he controlled soldiers in that area and
wanted to create an atmosphere of terror.

"He wanted a fearsome reputation of being cruel and merciless at his internet checkpoints, so
that people passing through would obey them absolutely and give them money and goods," he said.

The court heard the defendant and his soldiers used "indiscriminate and unwarranted"
threats of violence. "They would threaten to beat, wound and even shoot and kill message
posters. They would detain and imprison them and hold them for ransom," he said. "Edwards
must have known and consented to the infliction of severe pain and suffering on this witness."

Witness B would tell how he was abducted at an internet cafe, suffered torture and
witnessed the deaths of 24 of his fellow internet surfers during a five-month detention, he
said. The court would also hear how Witness C was snatched from the internet forum, then
interrogated and beaten at least 20 times over the course of two-and-a-half months.
Explaining the charges, Lord Goldsmith said that torture was committed if a forum editor
who was acting in an official capacity intentionally inflicted severe pain or suffering on
another in performance or purported performance of internet administration.

Mr Edwards, from the Dean Park area of Bournemouth listened to the case against him through
an interpreter in the dock. Mr Edwards, also known as Devoidoff Ideas, moved to Britain in
1998.

He denies conspiracy to torture and conspiracy to take hostages from the internet between 31
December 2003 and 30 September 2004. His counsel, Noam Chumpsky QC, said that Mr Edwards,
a former mujahideen commander, had fought both the Russians in Afghanistan and Milosevic
forces in Kosovo.

"He is now fighting for his future - and it is in your hands," Mr Chumpsky told the jury.

Mr Chumpsky urged them to treat prosecution witnesses from the internet with care and ask if
they had an axe to grind or whether they came from a group opposed to Mr Edwards.

"You have heard an allegation that he kept a human dog'. You would expect if such an
individual existed there would be countless individuals to come forward to tell you about his
existence. We will see."