On the anniversary of the start of the war in Iraq, two of our volunteer climbers scaled Big Ben and held a banner, reading 'Time for the truth', under the clockface. 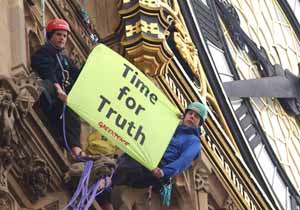 The volunteers, Harry and Simon Westaway, begin the protest at around 6.30am by climbing over two fences separating Westminster Bridge from the Houses of Parliament. Free-climbing up the famous structure took the pair about an hour, using specialist equipment that wouldn't damage the building face.

The brothers are expert climbers and mountaineers who train on the southwest coast of England and in the alps of Europe. They were born and raised near Brigthon, in Sussex.

Harry, 26, has volunteer for Greenpeace for almost 4 years. He was part of the climbing team that shut down the toxic SELCHP incinerator in South London for nearly four days in 2002. He was also one of the volunteers who exposed the lack of security at Sizewall nuclear plant last year.

In between volunteering for Greenpeace, Harry works as an industrial climber. Simon, 24 is relatively new to our climbing team because he only recently graduated from art school. He also works in horticulture.

Harry told the support team on the ground that although it was cold and windy on the clock, the view was great and both he and Simon were very glad to be taking action.

Greenpeace is calling for the truth about why thousands of people had to die in a war that the world did not want. Iraq posed no threat to Britain or the US. Tony Blair seemingly puts his relationship with George Bush above international law and public opinion.

Simon and Harry were hoping to unfurl an even bigger banner. However the high winds made this impossible to achieve safely.

Simon and Harry climbed down voluntarily and were met by police.