Harvey Nichols owns 5 shops in the UK and animal rights groups protested outside them for months as they sold clothes made of rabbit, fox and raccoon fur. A few days before a national day of action, the company officially withdrew all its fur and announced that it would not be selling it again.

Manchester's Campaign Against the Fur Trade group have been involved in a national campaign that has relentlessly targetted this company. Every Saturday, protestors peacefully stood outside, handing out leaflets and talking to shoppers, encouraging them to complain to the management about the fur inside the shop. 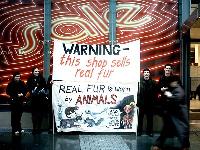