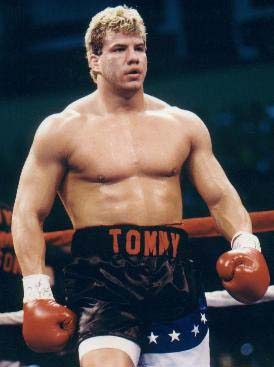 SIGNS ON FOR FEATURE FILMS

The “Great White Hope” of the 90’s, boxing champ Tommy Morrison has just signed on for roles in two upcoming films along with playing a cameo in the upcoming biopic about himself, entitled “The Duke”, a name he was pegged with during his boxing days as he is the grandnephew of John Wayne.

Morrison co-starred with Sylvester Stallone in “Rocky V”. He was one of the few boxers who crossed over into the mainstream public’s eye and had just signed on to fight Mike Tyson when he was released from prison when he tested HIV-positive on the night of one of his scheduled fights, stopping his stellar career in its tracks.

On this film, he will also serve as technical consultant and Morrison will be working closely with shingle Indie Genius Productions producer/writer Curt Johnson, who optioned his life rights. Boxing promoter Tony Holden, who saw Morrison through both the good and really bad times is onboard as Creative Consultant and Associate Producer. They’re now beginning to start talking with various big names in the sports world for roles in the film.

Along with all this, he is writing an autobiography and setting up meetings with networks and cable channels for his return to boxing commentary. The book is being repped by the Intellectual Property Group’s Joel Gotler.

“Five years ago, everyone thought I wouldn’t make it to see thirty-five, but as usual, I’m back and better than ever and ready to take on this new phase of my life,” Morrison said. In 1998, his t-cell count had plummeted to a scary low of 18, but now he’s undetectable and healthier than ever. “Like Curt’s described it, my life is very “Raging Bull” meets “Rocky”,” Morrison said. After being forced to retire from boxing, many thought him to be a lost cause when he was put in prison for eighteen months for several DUI offenses.