Two major retailers, Tesco (UK No 1 retailer) and Wal-Mart (world’s No.1 retailer) own substantial shares of Japanese supermarket chains, which are selling whale, dolphin and porpoise products. We need your help to persuade these companies to stop the sale of cetacean products in their subsidiary stores. 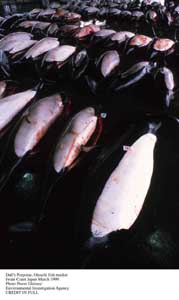 The sale of these products in C Two-Network stores supports the Government of Japan’s refusal to abide by the international ban on commercial whaling and the continued unsustainable exploitation of whales, dolphins and porpoises in its coastal waters. Tesco must act to stop this immediately.

For more information, read and download the Tesco briefing:
www.eia-international.org/cgi/reports/report-files/media72-1.pdf


Wal-Mart, the world’s largest retailer, has a major share in the Japanese supermarket chain Seiyu. Seiyu is a key distributor of cetacean products in hundreds of its supermarkets in Japan. As one of Japan’s leading supermarket chains, Seiyu’s distribution chain has helped to maintain the Japanese whale and dolphin hunting industry in spite of the international ban on commercial whaling and repeated international criticism.

EIA’s on-site investigations have revealed that Seiyu is selling dolphin, porpoise and small whale products from Japan’s unregulated and unsustainable coastal hunts, as well as large whale products from its ‘scientific’ whaling. Two thirds of products purchased in Seiyu group stores contained levels of mercury, which were higher than levels recommended for human consumption in Japanese government’s health guidelines. Half exceeded the government guidelines for methylmercury concentration. Methylmercury is a potent neuro-toxin, which can cause irreversible damage to nervous systems. Due to widespread mislabeling of cetacean (whale, dolphin and porpoise) products and a lack of adequate government health warnings, most Japanese people are unaware of the risks involved in consuming whale and dolphin products.

For more information download the WHALE*MART report from the EIA web-site:
www.eia-international.org/cgi/news/news?a=200&t=template.htm