The is a problem with videoing in the alternative as the is always a small number of "conspiracy" minded people who feel that "they are out to get them" and in the majority of alt-meetings the are no clear guide lines to allow a consensus on the subject of openness/closeness, thus videoing is often band. At the ESF the are clear principals that every one involved agrees with thus a real consensuses is possible if people are interested in achieving one. At the beginning of the meeting I put to the chars a good workable proposal about filming the meetings that would have clearly respected peoples need not to be filmed for whatever reason real or imagined. 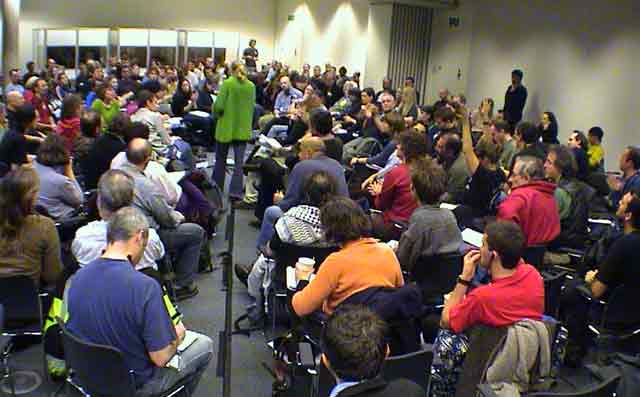 ESF meeting that kicked it all off

The resulting bad tempered outcome later was a direct result of not dealing with the issue on the agenda as agreed with the chars at the preves meeting and the beginning of this one. The ESF is an open process - this is agreed by everyone involved thus filming, sound recording and photography, allowing for individuals preferences, is clearly allowed.

The is a problem that a minority of people do not whont to be filmed and unless they are takeing part in some key function in the process such as chairing or facilitating this preferences should of course be respected. The simple and sensible solution is to have part of the room that is never filmed… then we have openness and respect for diversity of apion. The minority who do not won’t to be filmed then clearly make them selves non and there views are respected.

The idea of closing the meeting to video, photo and audio recording is simply incompatible with the principals of the ESF. No argument on this one.