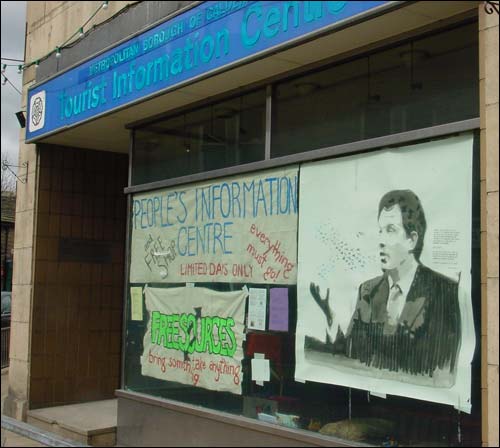 
Local residents have taken over the former Tourist Information Centre
building in Hebden Bridge. They say they object to the sale of the
publicly-owned building to the private sector for development, when
local people are unable to afford homes because of soaring prices.
The residents also say they want to draw attention to links between
damaging floods that have hit Calderdale, and the environmental
damage done by increasing use of air travel.

They have hung a banner in the window of the building re-naming it
"The People's Information Centre." They say they are also opening a
"free shop" for people to bring whatever goods they want to donate,
and take whatever goods they need. The occupation began during the
early hours of Wednesday, April 7.

The residents, who themselves live in various rented, owned, and
low-impact homes, say they are angry that the building, which was for
the use and benefit of the community, is being privatized, "to
provide more profit for the wealthy."

One said: "The housing situation is already disastrous for local
young people, and if it continues, Hebden will become a ghost town,
catering mainly for commuters and visitors. And when the locals and
the local shops are priced out by homogenous developments and chains,
what will be left for the visitors to come for? We want the council
to ensure that all housing
developments are 50% social housing - affordable housing created to
meet local needs not profit - and built to the highest ecological
standards."

Residents involved in the occupation said they want to remind people
that there is more to life than shopping.

"The modern fixation with ever-increasing consumption not only does
not bring lasting happiness, but also destroys other communities'
lands and livelihoods. We believe this cannot go on, and that at some
point it will be necessary to follow another definition of progress,
based on cultural vibrancy, strength of community, ecological
resilience and social
diversity - not material consumption.

"We are creating a temporary free shop, called 'Freesources,'" said
one resident. "It will work on a 'bring and take' principle - bring
something, take anything. This town, and indeed this planet, has
enough for everyone, if we learn to stop seeing every resource as
something to be exploited for profit."

The locals also want to offer some important "tourist information"
about the dangerous impact of increasing plane use. Another resident
said

"The expansion of aviation is the fastest growing cause of carbon
emissions, which are already causing crazy weather patterns. In the
next 10-50 years, this will be no longer a nuisance but rather a
global catastrophe, and people must start limiting their fossil fuel
use NOW. Flying is one area people really can choose to not
participate in - we want people to stay and discover the wonders of
the UK - or travel abroad by train instead."