To the peoples of the world - Fom Occupied Iraq

The Iraqi people call for international solidarity as they resist attacks by US-led Occupation Forces. It is clear that these attacks are designed to terrorize entire populations of Iraqi towns and neighborhoods. 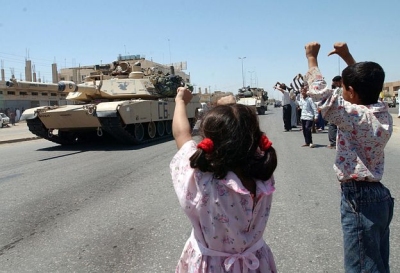 To the peoples of the world and their representatives at the United
Nations,

The Iraqi people call for international solidarity as they resist attacks by US-led Occupation Forces. It is clear that these attacks are designed to terrorize entire populations of Iraqi towns and neighborhoods.

According to reports, in Falluja alone, over three hundred Iraqis have been killed and hundreds more injured since attacks began on Sunday, April 4. There is fighting in Baghdad, particularly in the neighborhoods of Sadr, Adaamiya, Shula, Yarmok, and the cities and towns of Falluja, Ramadi, Basrah, Nasiriya, Kerbala, Amarah, Kut, Kufa, Najaf, Diwaniya, Balad, and Baquba. Residences, hospitals, mosques and ambulances trying to transport the injured are being
bombed and fired at by Occupation Forces' guns and tanks.

Falluja and Adaamiya are currently under siege, surrounded by Occupation Forces, in contravention of the Geneva Convention that prohibits holding civilian communities under siege. Hospitals do not have access to sufficient medical aid, essential medicine and equipment or blood supplies. In Falluja, the hospitals have been surrounded by soldiers forcing doctors to establish field hospitals in private homes. Blood donors are not allowed to enter; consequently, mosques in both Baghdad and Falluja are collecting blood for the injured. Water and electricity have been cut off for the past several days.


In Sadr City US helicopters have fired rockets into residential areas
destroying homes. Although no curfew has officially been imposed, US soldiers have made a practice of aiming tank fire on cars they find moving through the streets after dark. On Tuesday night alone, at least 6 people were killed in this way. US forces continue to occupy and surround all the police stations and the Sadr municipal offices.

While these attacks have escalated sharply over the past week, they are in no way a new phenomenon in occupied Iraq. The indiscriminate killing of civilians and the refusal to provide people with security, electricity and decent medical infrastructure have characterized the 'freedom' that Occupation Authorities have brought to Iraq.

We call on the international community, civil society and the
anti-war/anti-occupation movements to respond to this US-led war of terror with tangible displays of solidarity and support for Iraqi people facing this gruesome manifestation of the occupation.