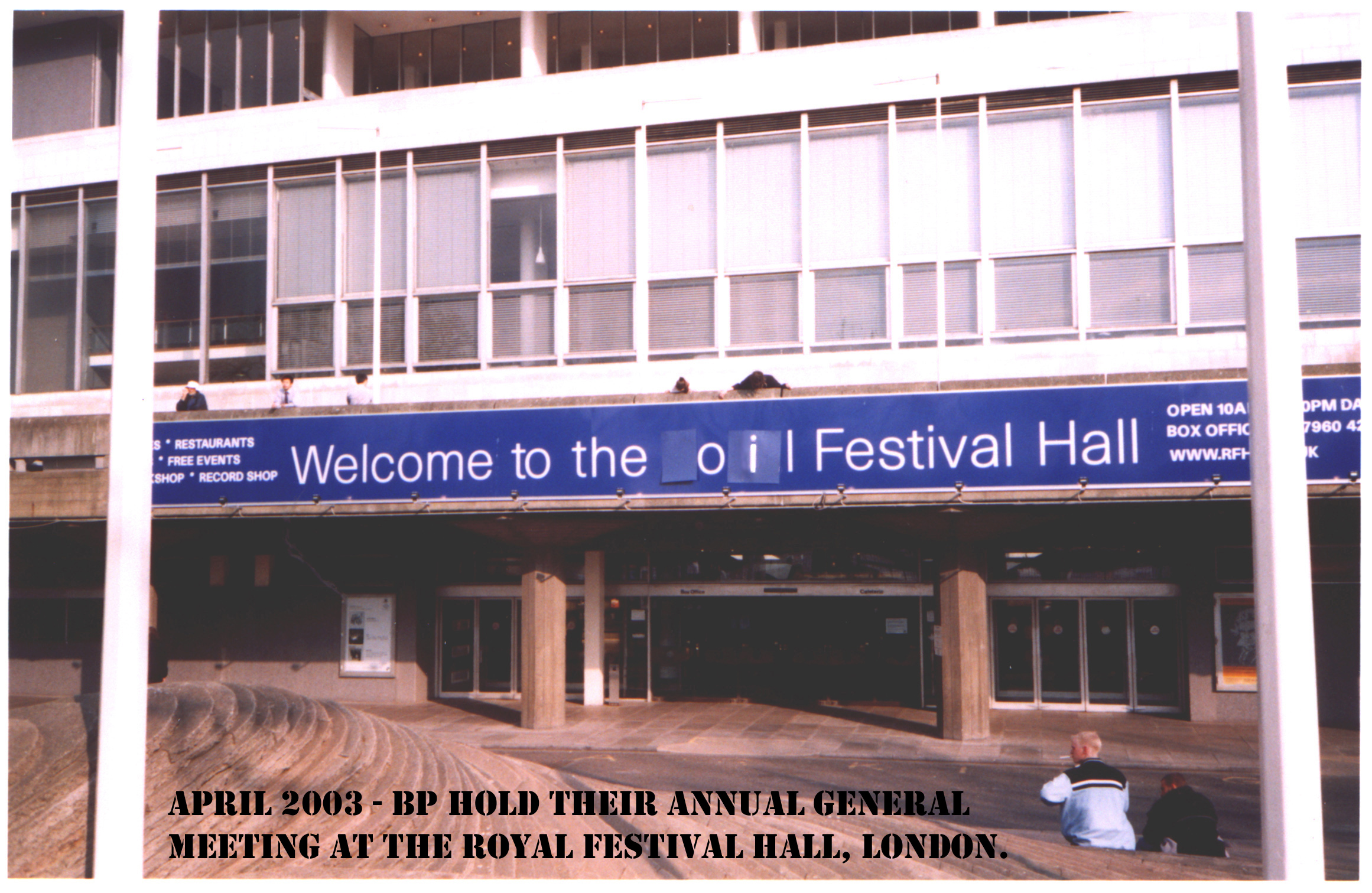 Greetings from the Oil Festival Hall

Last year, London Rising Tide 'celebrated' BP's Annual General Meeting (AGM) by holding a Carnival Against Oil Wars and Climate Chaos and alternative AGM outside. Several concerned members of the public also entered the meeting in order to make absolutely sure their concerns hadn't been swamped by the mile high tide of greenwash that had engulfed the Oil Festival Hall (OFH) for the day.

12 months have now passed, and what have we seen? BP, Shell and all the
other oil majors have profited handsomely from a destructive, deceit-ridden
war; BP's Baku-Ceyhan pipeline is under construction and has become an embarrassment that proves the company's green and socially responsible rhetoric to be nothing but top dollar public relations; and BP boss Lord Browne's salary soared to the just under £5m mark, just as his company's North Sea and other oilworkers saw their personal safety, union rights and wages increasingly in tatters.

Meanwhile, London Rising Tide (LRT), taking on this deceptively benign hellhound in ever greater numbers, has been present at pretty much every event where BP has shown its face. We've disrupted presentations by its boss and chairman, we've brought Caspian carve-up conferences to a standstill, we've visited Tate Britain, National Portrait Gallery, Natural History Museum, British Museum and Royal Opera House (all BP-sponsored), and we've shamed charities like Save the Children and WWF for their willingness to collaborate with the company on specific projects. We've taken our message - ie. the need to take creative grassroots action on the causes of climate chaos and build movements for radical social change - out to clubs, festivals, fairs and meetings. Lastly, we’ve started working with the rest of the Rising Tide network and other friends to build a ‘No New Oil’ coalition.

BP's AGM falls this year on Thursday April 15th, again at the OFH (aka Royal Festival Hall, on London's South Bank). London Rising Tide will be taking action as well, partly against BP, but also as part of its ongoing campaign to persuade the OFH, sometimes known as the People's Palace, not to shut its doors to the public for the day in exchange for BP's hefty fee, and to protect its reputation by cancelling next year's BP booking. LRT invites you to get involved with its preparations, or to come along on the day - get in touch for more details. And don't forget to spread the word far and wide.

While we're at it, the winner of this year's BP-sponsored National Portrait Award will be announced on June 21st, so to coincide with that, LRT and friends are setting up a series of actions and events dubbed at least for now as ‘An Exhibition of Resistance to BP and Big Oil’ to run alongside it. We are inviting people to contribute artworks that are a true portrait of an oil company, or with a political, social and/or ecological perspective. The exhibition will also discuss and display positive, community-owned and run solutions to our energy needs. Let us know if you'd like more info on that, or if you'd like to help out in any way; (help with web design is particularly needed.)'

Thanks for reading, and keep on doing what you can for peace, justice, the
environment and the long-term survival of our planet.