Easter Saturday, 10th of April, a peaceful demonstration of Zaptistas got attacked with stones, guns and fireworks in the highlands of Chiapas near San Cristobal de las Casas.

Result of the ambush: 29 Zapatistas injured, and 3 seriously, one with life threatening injuries.

Update (13.4.2004): Manuel Gomez Hernandez, one of those wounded in the attack , is in critical condition in hospital with a machete wound to the head, it is in the balance whether he will survive or not.
The Zapatistas in the hospital in San Cristobal de Las Casas are suffering poor medical attention and even worse are being harrassed constantly by the police.
125 zapatista families have fled their homes in the municipality of Zinacantan, Los Altos, Chiapas, fearing attack by militants of the PRD (Revolutionary Democratic Party).
A press conference by ngos including the network of community human rights defenders and solidarity protests are called for.

Sign an international letter of support with the Zapatistas (esp) from Barcelona's Zapatista Solidarity Collective. 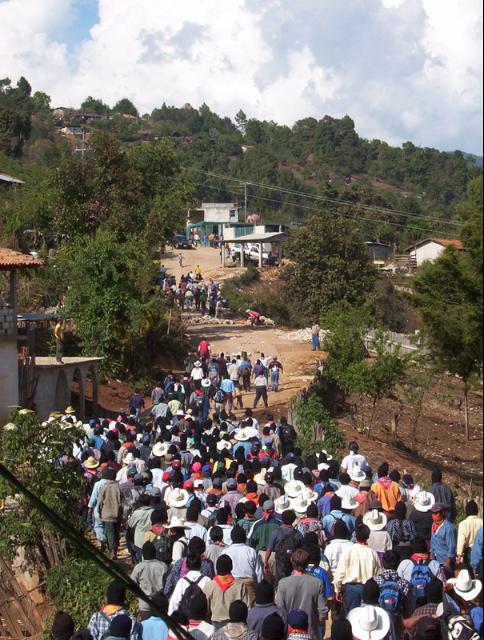 roadblockade where the demonstration was shot at 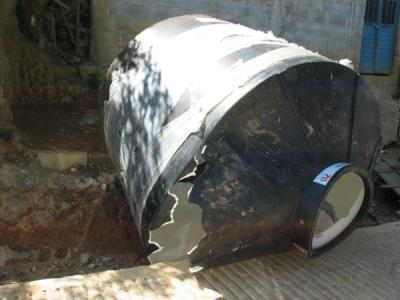 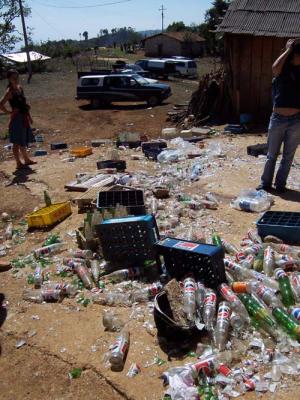 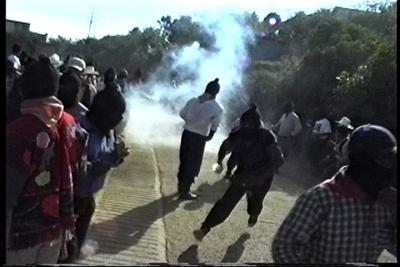 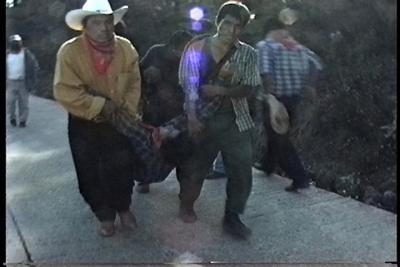 The demonstrations did not only commemorate the 85th anniversary of the murder of general Emiliona Zapata in the year 1919, they also came to support a group of Zapatista sympathisers, who are cut off from any drinking water supply of their local community because of their political believes.

At the time of the attack the demonstrators were returning to their villages. In the morning about 5000 women and men, masked up with their black balaclavas, drove in a convoy of about 200 vehicles to the mayor of Zinacantán to read out a declaration.In the declaration to the mayor of Zinacantán and his supporters the Zapatistas demanded not to deny access to the vital water because of party political reasons.

Interestingly enough Zincantán is not governed by the in Chiapas hated longterm state party PRI, but by the Party of the Democratic Revolution, PRD, which is considered to belong to the left-liberal spectrum. The PRD is governing the mexican capital since 1997 and is also at the moment involved in a country-wide corruption scandal.

Most of the inhabitants of Zinacantán showed sympathy for the demonstration of the thousands of Zapatistas who shouted slogans, but did not leave their vehicles. Afterward the caravan continued to Jechvò, one of the three communidades which are affected by the lack of drinking water and belong to the community. There the demonstrators delivered a speech and distributed thousands of litres of drinking waters in bottles and containers to the inhabitants. When the convoy returned, the convoy was suddenly stopped with a road blockade of boulders, by a small group of men, apparently paramilitaries of the PRD.

About three quarters of an hour the thousands of Zapatistas waited if the people who blocked the road and who were accompanied by two police cars of the local police, would change their mind. Then they approached and started to clear the road. The PRD supporters withdraw but started throwing stones at the Zapatistas. The local police then blocked the road with their cars and withdrew with the PRD people. The police cars were cleared off the road by the Zapatistas, and demolished and thrown into the ditch. The Zapatistas defended themselves by throwing stones back and by deploying and surprising the attackers from behind. When two thirds of the convoy has passed the point of conflict, the first shots were fired. Fireworks were thrown at the Zapatistas, but they were also shot at with live ammunition. Whilst the back of the convoy tried to find cover behind other vehicles because of this escalation, the front of the convoy had to clear further obstructions. Three trees were cut down and blocked the road.

They were cleared of by the EZLN supporters with the help of motor saws. When the convoy reached the crossroads of the Panamericana, that means the main road, which connects San Cristobal and the capital of Chiapas Tuxtla Gutiérrez, they were expected by some government representatives of the federal state and filmed by the political police.The Zapatistas ignored this provocation, too and attended the seriously injured, who were taken to the front of the convoy and transported as quick as possible to the local hospitals.

Meanwhile local eyewitness report that the Zapatista inhabitants left in Jechvó are threatened by paramilitaries of the PRD. The inhabitants are said to have gathered in a house and barricaded themselves in, whilst attackers destroyed several houses and emptied out the drinking water supplies delivered by the convoy.