BRITISH MONARCHY AND THE POLITICS OF SUBMISSION

The other day, the Queen of England visited Toulouse, in south western France. First she went to church, then she had lunch with the mayor, then she christened an airliner for Virgin Atlantic Airways at the Airbus Works, and then she went home. A great big crowd of people turned out to see her. The fascination that people have for Her Royal Highness is a source of much perplexity. After all, royalty is an aberration that has survived in modern times, like the appendix at the bottom end of the human intestine. So while we wait for it to explode, here is a photographic account of her visit... 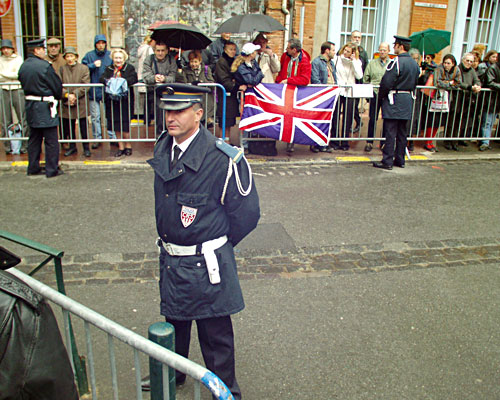 Police line waiting for the queen. 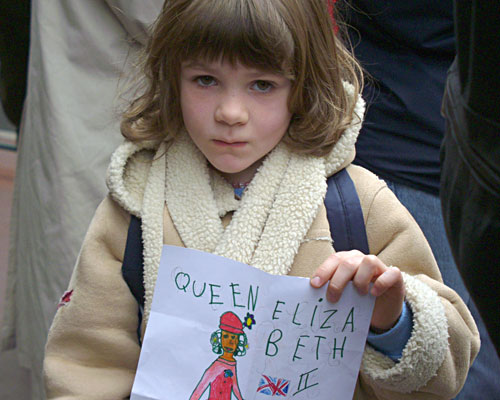 This is as close as you shall get to her stiff upper lip.

This is the Queen's fourth State Visit to France, and the first since her renegade daughter-in-law and lover were killed in a dramatic accident while on an outing in Paris. The visit was to celebrate the 100th anniversary of the Entente Cordiale, an agreement which put an end to colonialist rivalry between the two countries, and led to their alliance in two World Wars. The English Press has remarked on Jacques Chirac's doubtful taste in meeting Queen Elizabeth at the Place de la Concorde where, two centuries ago, revolutionaries separated the monarchial head of state from the body politic. According to the English Press, Chirac came near to a diplomatic incident by placing his hands in far too close proximity of the Royal body (notably her back), undoubtedly to expedite her to the dinner table. Chirac should not be brought to task, he has always been voluble with his hands, after all, as a young Minister of Agriculture, they used to call him "the ventilator".

The first question on peoples' minds, crowding against the barriers: How close are we going to get to her? Will she walk in the streets? After all, when she visited Nigeria and wanted to come into contact with the local populace, they built a mock village and the locals were played by actors.

In Toulouse, everything was ready, the trappings of royal ritual - pageantry of banners, throngs of policemen in their livery, sweet little girls - were all in place. Finally, she arrived in a motorcade that could barely fit through the narrow streets. She rode to church (les Jacobins, which holds the relics of Thomas Aquinas) in an armoured SUV Range Rover, and we hardly got a glimpse. After that she took a prelunch stroll across the Place du Capitol, was given flowers by some flag waving children, and was introduced to aspects of indigenous folklore. She was lustily cheered by a large crowd of people, both local inhabitants and British expatriates, and was treated with due deference by all those with whom she chose to converse.

And the question arises: In the benefit of whom was this show held? The public's, or the queen's? Such an enormous issue is made about correct behaviour towards the queen, that it is a constant leitmotif of her existence. Impoliteness on her behalf gets copious media coverage, along with her misbehaved family, her annus horribilis, her busy timetable of christenings and chrysanthemums. She is the Queen of Queens, she had all the best and biggest colonies. She has brand value, like Microsoft or MacDonalds, but beyond that, she has royalty! She knighted Bill Gates, not the other way around. Each time a new American president is elected, the pundits "legitimize" him by the quantity of royal blood that they inherited from their ancestors.

The show was held in her favour, so as to better keep us in rank, to show us our station in life. With her vulgar outfits and outrageous hats, her treacle sweetness, the Disney pageantry that surrounds her and her "simplicity" towards the common folk, she is there to better signify us our state of submission.

Once upon a time, royalty, and the class of nobility underpinning it, came into being as a means to justify the hostile transfer of national resources into private hands. They called themselves "protectors" to legalise their predation. They faked their divine nature to fool the people into believing in their royal supremacy, and their own submission.

That is all past tense. Today's monarchies are constitutional, today's royals are figureheads.

That is what they want us to believe. Who? They? Royalty today is colourful and quaint, she is quite harmless, ridiculous in an old fashioned way. They want us to believe in her, dote upon her, by arousing our sense of indulgence. Don't believe them, royalty serves to make iniquity look innocuous, to make "keeping you in your place" appear to be totally natural. As if they are saying, "you don't have to exist, she can exist for you" - just shut up, accept your lot, and buy our products. Though she has lost political power, her wealth is intact, and she continues to symbolize and perpetuate the indestructibility of her class.

e Over My Dead Body project is a world wide, online, virtual demonstration, politicising the major themes of globalisation and the economy, the environment, antiracism, gender issues, etc. The federating platform is the promotion of "the politics of generosity" to unblock the stranglehold of financial and imperialist self-interest upon the world's destiny. It is evident that the war against Iraq enters within a definition of corporate imperialism: thus protest against the war and its aftermath is part of the project's agenda...

People are invited to participate, and are represented symbolically in the demonstration by their name, place of residence, and if they so wish, photo, and virtual placard. Thus people from the four corners of the globe may march together, and in this way the demo is a powerful and active metaphor for fraternity. Take a moment to watch people pass by, seeing where they come from and what they say.

If you have not joined the demo yet, you are cordially invited to join us!