An excellent meeting took place in Cambridge yesterday to discuss the possibilities of setting some kind of new collective in the city. It was surprisingly well attended given the short notice and less than perfect advertising and it seems that quite a few of us have been wanting something like this to emerge for a while. 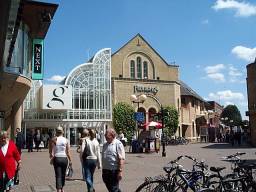 Grafton Centre - Mayday fun for all the family!

All it needed was for some people to get the ball rolling...which we've now done :-) Those who showed up have previously been involved in various political stuff in various groups.

I think I'm right in saying that we agreed in the meeting to three basic things...

* Cambridge could do with a collective of individuals who want to be politically active in a non-hierarchical, non-party-political kind of way...so we're going to be one!

* The G8 meeting in the UK next summer will be a longterm focus but not the only thing we'll be taking action on.

* We're going to do something on Mayday in Cambridge at the Grafton Centre.


No firm plans yet as to exactly what will be happening but there will be a further meeting this Thursday to get things moving. The general themes will be workers rights, consumerism and a reminder to the nastier companies in the area that we're keeping an eye on how they operate ;-)


The next meeting will be taking place at the Housing Co-op at 5:30 on Thursday (22nd April). Whether you're a veteran activist or completely new to it, please come along to a meeting to find out more and get involved. See below for directions...

You're looking for the building that is known as the 'Hut' which is on the right at the bottom of Fletchers Terrace (1st right off Argyle Street).