The two activists who were blocking the traffic of the Aubonne- motorway bridge during the protests against the G8 summit in Evian last year are on Tour in Switzerland. The are facing a trial at the 28th of June, whereas the responsible policemen are still covered in impunity. Check Tourdates at the end of the article. 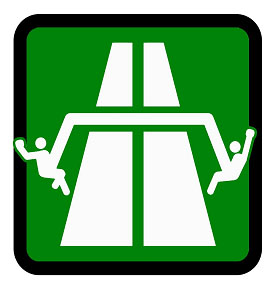 Swiss Authorities Try to Jail the Activists they Nearly Killed

After nearly being killed by the Swiss police, 2 anti-G8 activists now
face a possible six months in jail.

Martin Shaw (UK, 39) and Gesine Wenzel (Germany, 25) were yesterday
summoned to appear in court on June 28th in Nyon (CH).

Prosecution of the anti-G8 activists proceeds swiftly while complaint
against police crawls at a snail’s pace.

Eight months after an incident in Switzerland in which police incompetence
nearly cost them their lives, two anti-G8 activists are now being
prosecuted by the Swiss Authorities on charges of blocking traffic
circulation endangering other peoples' lives.

On the 1st of June 2003, they blockaded a road leading to Evian by
suspending themselves from two ends of a rope over a bridge, attempting to
prevent delegates from being able to attend the G8 summit. A police
officer cut the rope and sent Martin plummeting 25 metres into a shallow,
rocky stream beneath the bridge, while Gesine was saved by the quick
reflexes of the support team who managed to grab hold of the rope.

As a result of his fall, Martin suffered extensive injuries to his spine,
pelvis, and feet. It is still unclear as to whether he will ever regain
full mobility. Gesine has been receiving therapy for Post Traumatic Stress
Disorder. Both of them have been unable to resume their normal lives since
the incident. After all they have suffered, they have been summoned to
court on charges which could result in considerable fines and up to six
months in jail.

“This highlights the extreme lengths that the authorities will go to in
order to deter people from exercising their democratic right to protest,”
said Martin. “Its outrageous that there are charges involving us having
endangered the lives of others, while the police officers that very nearly
killed us are going about their jobs as if nothing happened.”

“We see this as one episode in a rising tide of repression against people
daring to challenge undemocratic and unaccountable instituitions like the
G8,” said Gesine. “Its really important that people respond to this
repression with renewed energy rather than allowing such scare tactics to
intimidate people into silence.”

Gesine and Martin have filed a complaint against the police for
endangering their lives, not assisting them in distress, and for
inflicting severe bodily harm on Martin.

While the criminal proceedings against Martin and Gesine have been swiftly
processed by the Swiss judicial system, the complaint against the police
has been hindered by all manner of bureaucratic obstacles, and the outcome
of what would seem to be a clear cut case of police culpability remains
unclear.

Gesine and Martin are currently on tour to inform about their case and to highlight the dramatical curtailing of civil
liberties across Europe which effectively criminalise the right to protest. The tour starts on the 18th of April in Milano and will continue passing several cities in Switzerland Germany during the next two weeks.

The Tour- dates are: