Fish Shop Gets a Battering

Local residents who took over a former Council building in West Yorkshire for five days over Easter have declared the occupation a resounding success. The residents occupied the former Tourist Information Centre in the Pennine town of Hebden Bridge.

The building has been handed to a developer to convert into apartment flats and a restaurant, rumoured to be part of the Harry Ramsden chain. The occupiers said they wanted to highlight the threat the former textile community is under from unsustainable development and soaring house prices. They opened a Free Shop, called "Freesources", offering tea, food, clothes, books and toys for free, stating "we believe that without profit, there is plenty for all." They also gave out "tourist information" such as "don't fly anywhere – it's destroying the planet! Take the train instead."

The locals opened the building to the public on the morning of Thursday April 8. Jim Brown, the centre's new owner, well-known in Hebden for turning a series of buildings into upmarket apartments, attempted to have them removed by the police. However the police acknowledged that the locals were legally "squatting" the building, and Brown's representatives left amicably after boarding up a window. "This conveniently supplied us with a dark room to show films during the daytime!" said an occupier. 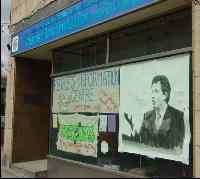