are you happy with the Stop the War Coalition?

Have your say in the future direction of the peace movement. Please come to the Annual General Meeting (AGM) of Swindon Stop the War Coalition on 27th April, at 7:30 in the Friends Meeting House, Eastcott Hill. 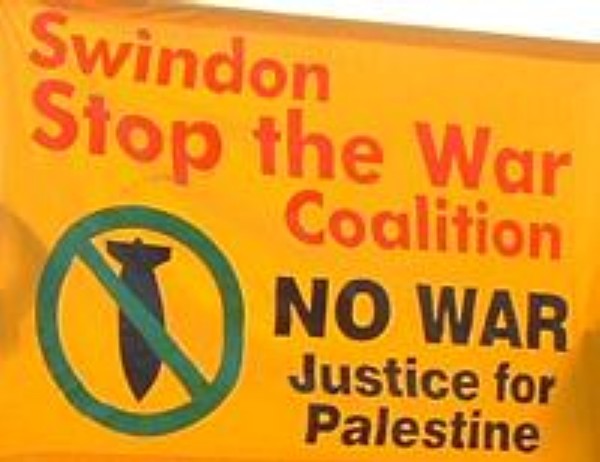 we love our banner!

Is Swindon Stop the War Coalition doing the job you think it needs to do?

The terrible recent violence in Iraq, the continued detention without trial of Guantanamo Bay and Belmarsh prisoners, the descent of Afghanistan into warlordism, the bombing of the Madrid Metro and the escalating violence in Israel shows that there clearly is a need for an organised peace movement in Britain. But how should that peace movement be organised and how should we campaign?

Swindon Stop the War Coalition has established itself as a campaigning force in the town over the last 2 years, but what do you feel about it? Whatever else we achieved we didn’t stop the war on Iraq, and there are clearly less people involved in the campaign now than there were before the war started.

The AGM is the opportunity to change the direction of Swindon Stop the War Coalition. You can replace or criticise the officers of the coalition! Set campaigning priorities and submit motions, or just come along and speak your mind.

The following motions have already been submitted, if you want to submit a formal motion you can just send it to me, in which case I will try to circulate in advance, but we are not an overly formal organisation, so anything can just be raised on the day, formally or informally.

MOTION 1
This AGM recognises the achievements of Swindon Stop the War Coalition in involving people across the political spectrum and re-affirms the political non-alignment of the Coalition.

MOTION 2
Swindon Stop the War Coalition aims for peaceful and democratic regime change at home in the UK - ensuring that voting for the Iraq war remains a stain on the records of those MPs who did so, right up to the general election.

MOTION 3
Swindon Stop the War Coalition opposes the development, manufacture, proliferation and sale of all weapons, from hand guns to nuclear weapons. We call on the UK government to stop developing new nuclear weapons, and to decommission the existing stock of nuclear weapons. We believe that the arms trade is immoral and should form no part of the UK manufacturing industry, and that events such as DSEi (Defence Systems Equipment International) have no place in a country which claims to be furthering the cause of peace and democracy. We call for a total ban on the export of all weapons and weapons components, and on the use of locations in the UK for promotion and exhibition of such items.