Between 26-28 April representatives from 300 companies - including Shell, ExxonMobil, ChevronTexaco and US arms manufacturer Raytheon – will be attending a business conference in London entitled Iraq Procurement 2004: Meet the Buyers. They will be meeting members of the US occupation authority, the US-installed Iraqi “government”, and wealthy Iraqi business-people to discuss "the wide range of opportunities available" to make a profit out of the increasingly blood-soaked occupation of Iraq. The conference takes place in the context of a series of new laws passed by the US last September, that "effectively put [Iraq] up for sale" to foreign investors (Guardian, 22 Sept. 2003)

A growing body of evidence that the way in which the Bush administration has been "treating [reconstruction] contracts as prizes to be handed to their friends" has been "delaying Iraq's recovery, with potentially catastrophic consequences" (economist Paul Krugman, New York Times, 30thSept. 2003) On the other hand, US attempts to ‘restructure’ (rather than cancel) Iraq’s odious debts, attempts likely to "rob Iraq of [its] economic freedom by requiring that it adhere to an IMF structural adjustment program" (Jubilee Iraq). All of this as a backdrop for the killing of over 600 people in the US siege of Fallujah, "the vast majority of [whom] were women, children and the elderly" according to the director of the town’s general hospital (Guardian, 12 April)

Voices in the Wilderness UK has been campaigning on Iraq for the last six years. To visit the Iraqi procurement website and see the blatant carve up of Iraq see The Iraqi Procurement Conference where you can check out their agenda for the event. 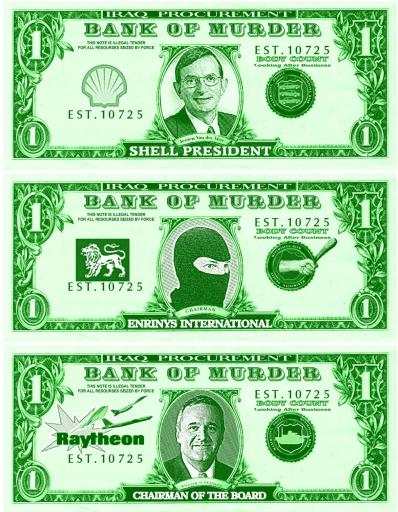 The BBC's World Affairs Editor, John Simpson, has refused to speak at a business conference next week at which representatives from 300 companies - including Shell, ExxonMobil, ChevronTexaco and US arms manufacturer Raytheon - will meet members of the US-installed Iraqi "government" to discuss 'the wide range of … opportunities available' to make a profit out of the increasingly blood-soaked occupation of Iraq.

Mr Simpson's agency had apparently forgotten to inform their client, who only found out that he was listed on the conference web-site as the 'guest speaker' at the conference's 'four course [gala] dinner with wine' yesterday afternoon, after Voices UK circulated a press release urging him to pull out of the event.

In an email to Voices UK, Mr Simpson explained that the moment he heard his name was on the conference web-site he 'immediately rang the organizers to make it clear there was no possibility of [his] taking part.' 'I'd never accept an invitation to anything that was as contentious as this,' he added.

Voices spokesperson Gareth Evans said 'We are very pleased to learn that John Simpson will not be speaking at this conference and that he was unaware his name was being used by the event's organizers. John Simpson was one of the few journalists to speak out against the devastating UN sanctions on Iraq, so we are not surprised to learn that this "booking" had nothing to do with him. We would urge any other public figures that are approached to speak at this event over the coming week to similarly decline.'

Voices is one of a number of groups and individuals helping to organise a protest to coincide with next Tuesday's conference dinner. Two suited 'pigs' bearing corporate logos will gorge themselves on a trough of blood-stained banknotes at 6.30pm next Tuesday outside the London Hilton on Park Lane to protest against the 'corporate feeding frenzy' taking place at the business conference and dinner. The Hilton is the 'official hotel of choice' for the conference. The protest, in support of the rights of Iraqi workers and demanding 'reconstruction, not rip-off',will also feature speakers from the Union of Unemployed Iraqis, the Organisation for Women's Freedom in Iraq, and the Campaign Against Arms Trade amongst others.

Voices in the Wilderness UK has been campaigning on Iraq for the last six years. For more info see their website.

To visit the Iraqi procurement website and see the blatent carve up of Iraq without the Blair bulls go to The Iraqi Procurement Conference and check out Their agenda for the event is here.

Security was surprisingly slack given the UKs High Alert terror status and that representatives from the Coalition Provisional Authority (CPA),the Iraqi Governing Council, plus arms dealers Raytheon and private security firm Erinys already attacked by the Iraqi resistance in Baghdad were in attendance.

On re-entry through a wide-open un-guarded back door, they unfurled a banner in the main lobby written in Arabic and Polish stating UK, US AND POLAND PARTNERS IN CRIMES AGAINST HUMANTIY. Referring to the delegates as collaborators, they declared the conference an affront to those struggling under continual attack both social and physical from the Occupation, entrenched poverty, exploitation and Occupation sanctioned neo-Baathism in Iraq.

Their protest also aimed to honour the estimated 1500 (local figure) dead in the enduring Fallujah massacre. The two were forcibly ejected and charged with Aggravated Trespass for disrupting a lawful event.

The accused will be challenging their charge, represented by maverick civil liberties lawyer Jim Nichol (Taylor Nichol) on the grounds that the conference itself is unlawful as it is based on Occupation Orders which have forced a free market economy on the people of Iraq in violation of international law on the prohibition of destruction of state or social property under the Geneva Conventions 1949, and Pillage and Usufruct under the Hague Regulations of 1907 to which both the UK and US Are signatories.

In a leaked memo dated March 26th 2003, UK Attorney General Lord Peter Goldsmith advised Prime Minister Blair that in his view, the imposition of major structural economic reforms would not be authorised under international law

Jasiewicz and Quinton will be appearing in Highbury Corner Magistrates Court, Holloway Road, N7, 10am on May 19th

There's a video of this protest at

Another Link To Voices In The Wilderness

1./Please remove that idiotic kiddie trolls offensive post.
2./ The voices link does not appear to be woprking at the moment for some reason. Here is
another link to the Voices In The Wilderness

Thanks mark r for pointing out that the VoicesUK link in the feature wasn't working. I've changed it. Also deleted trolls abusive comment.

Enough respect to all the soggy people outside The New Connaught Rooms rooms tonight. I really don't think the weather could have been any worse :/

Yes, and I just saw the headline today that chevron/texaco was making huge profits this year. So they should lower the price, but they raised it instead to make $$$$. About 50 cents goes to pay high salaries to government employees, and fringes, or corporate welfare/inside jobs, and then the $1.75 goes to the oil companies.