Practitioners of Falun Gong will mark April 25 this Sunday with activities around the world, renewing the call for Beijing to end a five-year campaign of suppression that legal experts have come to term genocide. 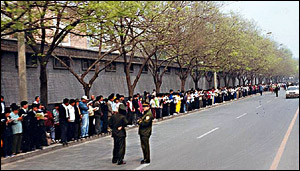 Over 10,000 Falun Gong practitioners staged a peaceful appeal in Beijing

Practitioners of Falun Gong will mark April 25 this Sunday with activities around the world, renewing the call for Beijing to end a five-year campaign of suppression that legal experts have come to term genocide.

It was on April 25, 1999, that Falun Gong stunned the world when some 10,000 adherents petitioned the central government in Beijing. Those gathering asked officials to redress maltreatment by the Public Security Bureau and a defamatory article in breach of national policy on qigong.

“It’s a bittersweet occasion,” said Erping Zhang, a spokesperson for the group. “April 25 was a peaceful response to police brutality and months of illegal activity by security personnel. What’s tragic is, the regime’s head, Jiang Zemin, used the occasion and launched a campaign to ‘eradicate’ Falun Gong.”

“But at the same time, there’s a message of hope in April 25. Thousands of people, from all walks of life, went together to their government to report on unlawful activities. It was a show of good citizenship, you could say. And that same peaceful approach has come to be Falun Gong’s hallmark under horrible, brutal suppression.”

The Sunday events continue that tradition of peaceful demonstration. Dozens of cities are expected to participate, with events ranging from panel discussions and photo exhibits, to marches, candlelight vigils, and sit-ins outside Chinese consulates. Participating cities range across the US, Canada, Europe, and elsewhere.

“The fact is, when it comes to worldly political power, to the authority somebody has, we’re not interested in that. We absolutely, positively don’t want to seize the Communist Party’s power. We’re just doing self-cultivation,” Li said, continuing, “that’s part of the propaganda the Party’s rumor-mongering media spreads, and from day one they’ve been fabricating stuff about us vying for power with the Communist Party.”

“All we’re asking is to have some space that allows us to follow our beliefs,” Li added, “to have our personal freedom to do our practice. That’s all.”
_________

Background On April 25th in China

The significance of April 25 reaches back to 1992, when Li Hongzhi, a qigong Master from Northeastern China, began publicly teaching Falun Gong in the Mainland. Falun Gong (or Falun Dafa), is a practice of meditation and exercises with teachings rooted in the values of Truthfulness, Compassion, and Tolerance.

A small circle of politicians in China began opposing Falun Gong as the practice grew popular. Attacks in the state-run media began in 1996, and Falun Gong books were banned from publication. The Chinese government estimated there were 70-100 million practitioners in China in 1998. A nationwide investigation into Falun Gong by retired cadres concluded that Falun Gong poses no threat and that, on the contrary, it is beneficial to Chinese society.

However, individuals within the Public Security Bureau (PSB) continued escalating the infringements by dispersing group exercise sessions, searching homes, and confiscating property. Practitioners reported these abuses to the government 18 times between 1998 and 1999 using the form of large appeals.

After a Tianjin-based magazine attacked Falun Gong, some 40 practitioners were violently seized and detained by police when they peacefully voiced their concerns. Tianjin city officials later advised practitioners to go to Beijing instead, since the PSB was involved. Acting in accordance with their constitutional right to assemble and appeal, on April 25, 1999, over 10,000 practitioners gathered outside Beijing’s Office of Appeals, located beside the Zhongnanhai residential compound.

That night, however, in a move some analysts have attributed to fear and jealousy, former Communist leader Jiang Zemin took an official stance against Falun Gong. In July 1999 Jiang outlawed the practice and began a violent campaign to “eradicate” Falun Gong. The regime has since implemented a full-scale propaganda campaign against Falun Gong while imprisoning, torturing, and even murdering its adherents.

The Falun Dafa Information Center has verified the details of 951 deaths. In October 2001, however, government officials inside China revealed that the actual toll was well over 1,600. Expert sources believe the figure to now be much higher.