Anarchism on wheels? Or just a bunch of cyclists getting together on a Friday evening? Sit back, close your eyes and imagine a thousand people cycling along a central London street... filling the street... there aren't any cars... the noise of the traffic is drowned out by music, whistles, bike bells and people having conversations while cycling together…

On the last Friday of April 1994 London’s first Critical Mass took place with about 50 cyclists, and this month's ride on Friday 30th April will be a celebration of 10 years of reclaiming London’s tarmac. 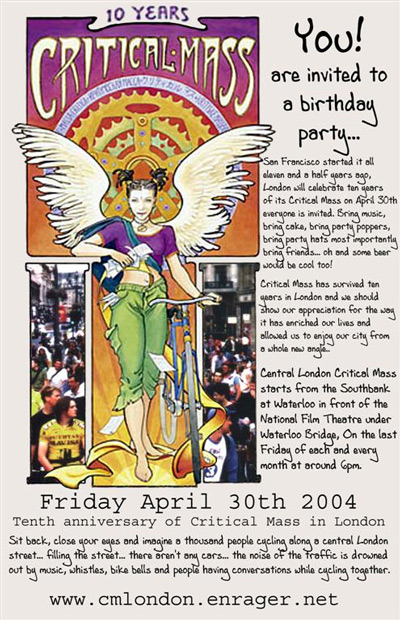 A spontaneous radical grassroots direct action approach to resisting car culture, originally born in San Francisco in 1992, now takes over 100 cities worldwide with no leaders, no controllers, no central organisation, no set political ideology, and not even a set route for the ride! A mobile temporary autonomous zone open to everyone and anyone, it’s not even necessary to have a bike – skateboards, roller blades and wheelchairs are also part of it. There are hundreds of cities with thousands of people taking part every month.

The emphasis is on having fun, but Critical Mass has raised awareness of the negative effects of car culture, highlighted urban cycling, advocated alternatives to fossil-fuel-driven transport and has managed to put alternative transport issues on the political agenda.

This Friday’s 10th birthday Mass should take on a party atmosphere, with a call for people to bring music and food and drink. And this Thursday Indymedia cinema will be screening films about Critical Mass at The Other Cinema.