Residents protest to save community forest

Angry West Swindon residents yesterday assembled in their hundreds and more to protest against Swindon Town Football Club (STFC)'s plans to build a new stadium and 'sports village' on the site of a community forest. There was a bit of a traffic jam while they crossed the road, before taking a walk round the forest to reclaim it for the community. 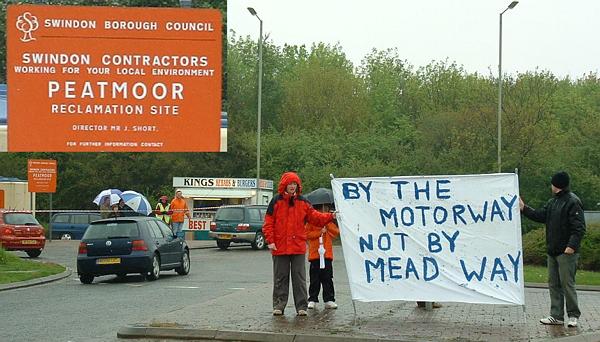 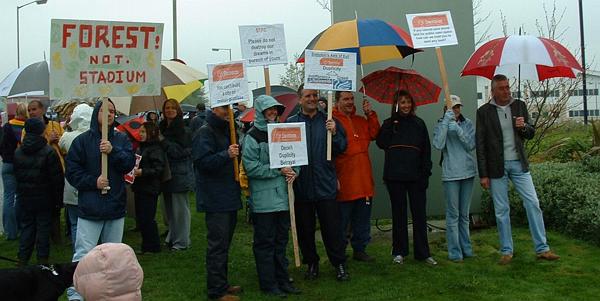 Assembling protestors pose for the media 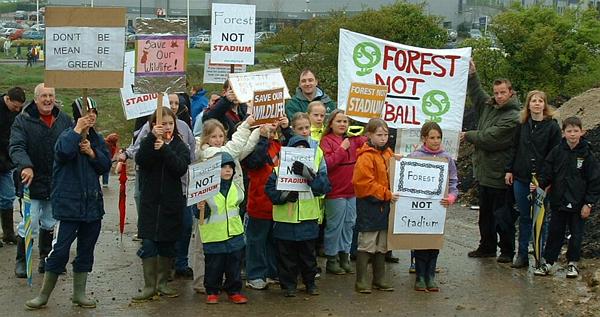 More posing, at the top of the entrance road to the site 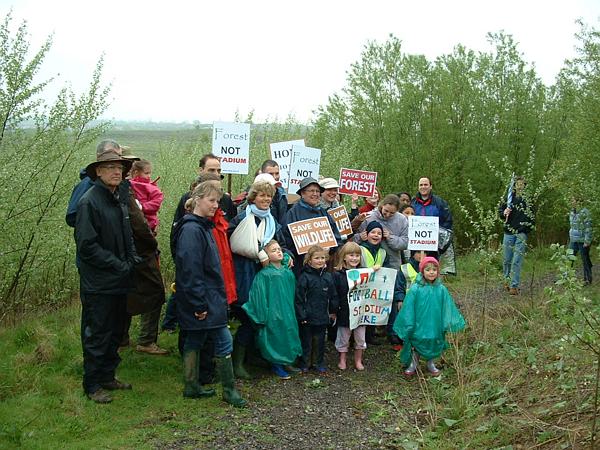 And again, this time in the community forest proper

Is this what Mead Way could look like on match days? 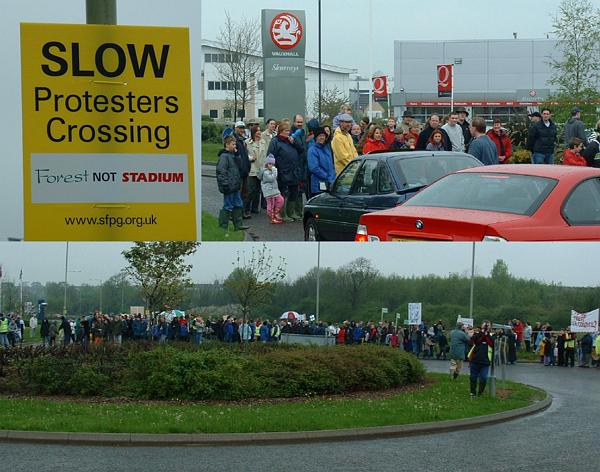 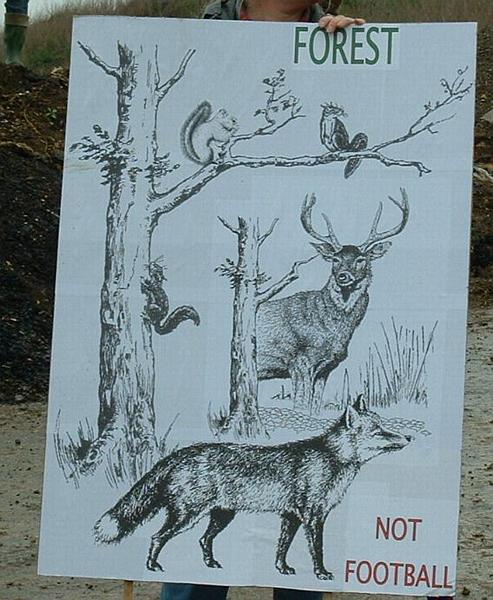 Someone put a lot of effort into this placard 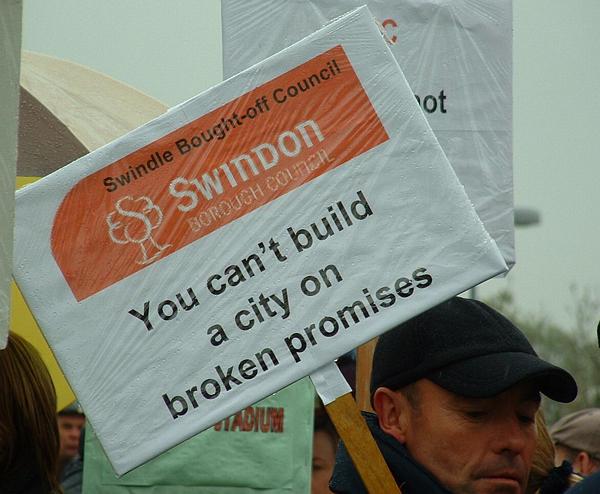 You can't build a city on broken promises 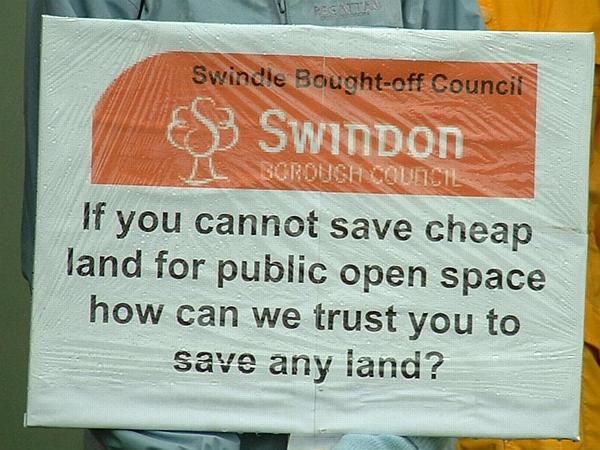 If you cannot save cheap land for public open space, how can we trust you... 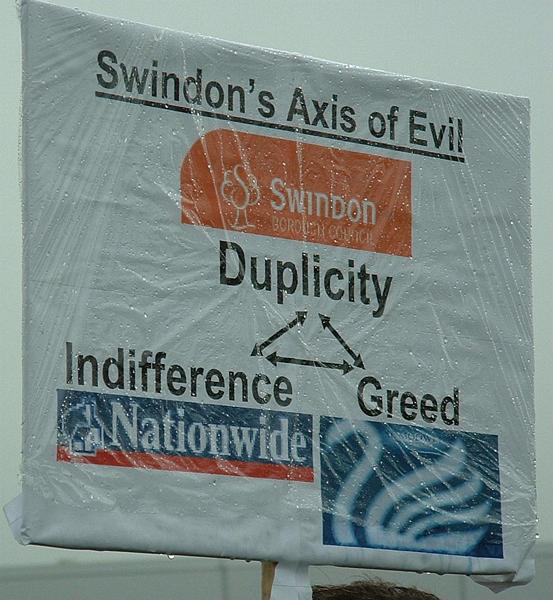 Despite the rain, by 12pm on Saturday 1st May, some three to five hundred people (photojournalist's estimate, later police estimates stated 1500) had arrived at the junction of Mead Way and Hillmead Drive, near the residential areas of Shaw and Sparcells and the Hillmead industrial estate. An orange sign at the other side of the junction proclaiming the entrance to "Peatmoor reclamation site" was the only indication of the presence of the community forest.

The area was used as a landfill site years ago, but was since capped, and covered with the earth excavated during the construction of Swindon's northern expansion. Since then, local residents have been planting trees on the site in a council-sponsored scheme to grow a community forest in the midst of an ever-expanding urban sprawl. Some of the trees are dedicated to deceased loved ones.

With umbrellas, brightly-coloured clothing, and placards with slogans such as "If you cannot save cheap land for public open space, how can we trust you to save any land?", the protesters consisted mostly of family groups, without a dreadlock, samba band or paper-seller from a left-wing political party in sight. Certainly not the sort of people who would normally take to the streets with placards on May Day.

They started to cross the road (very slowly), and suddenly the traffic conditions started to resemble the morning rush hour along Mead Way (also very slow). Drivers saw the strategically-placed "By the motorway, not by Mead Way" banner, and many honked in support, to enthusiastic cheers from the protestors.

It took about three quarters of an hour for the entire procession to cross the road. Those who had crossed climbed to the top of the entrance road to the site, posed for photos for the local press, looked back down at those still crossing the road, and shared their surprise at seeing dissent on such a scale in such an apathetic place as Swindon, before picking various routes to walk around the site and enjoy the peace and greenery.

During the course of the walk a deer was spotted, being an example of the wildlife which supporters of the community forest want to ensure a habitat for. Unfortunately, the deer was rather startled to see so many humans, and ran for cover before I could get a photo. Given the previous track record of humans and their interaction with wildlife, this can be considered a sensible reaction.

On Thursday 29th April, the plans for the stadium and sports village were put on display for consultation at Roughmoor Social Hall. In a very small and crowded room, hundreds of residents came over the course of 6 hours to look at proposed plans of the site and proposed plans for the re-development of the County Ground (STFC's current stadium), talk to representatives of Halcrow and STFC, and complete a 'consultation questionnaire'. This exercise will be repeated at the County Ground on Thursday 6th May from 1-8pm.

The questionnaire itself drew a lot of criticism for the bias of the questions. For example, question one asked what residents would prefer to have at the site in question. The two options were both for sports villages with the same facilities but arranged in a slightly different layout. The third option, 'community forest', was not present, although this did not deter a large number of people from writing it anyway.

Different people have objected to the plans for many different reasons. Here are just a few.

* The road network around the site is not suitable for the volume of traffic which a football stadium would attract. In particular, Mead Way can hardly cope with the regular commuter traffic during the rush hour. Many have suggested that the logical place for a new stadium would be by junctions 15 or 16 of the M4.

* The land is a community forest. It is an ongoing project and a long-term investment by all the residents who have come to plant trees at the site, hoping to grow an oasis of green and wildlife for their children and grandchildren to enjoy.

* The area was operated as a landfill site in the time before proper measures were put in place to allow the venting of gasses produced during decomposition. These gasses could build up inside any buildings which are built, causing an explosion hazard.

* No-one seems to know what exactly is buried there. There are eye-witness accounts of asbestos waste from the former Great Western Railway engineering works being taken there for disposal, however the records of what was disposed of, which Swindon Borough Council should be keeping, seem to be missing. Excavation work prior to building could disturb this unknown waste, with potentially enormous environmental and financial costs.

* The area forms part of Swindon's network of strategic green corridors, and development work would seem to be contrary to policy ENV20 of Swindon's Local Structure Plan, which states: "To protect and enhance linear open spaces within the Borough, development in existing strategic green corridors, as defined on the proposals map, shall only be permitted where: a) It does not adversely affect the physical continuity or integrity of the corridor, and....."

The May 2004 edition of Link Magazine, a free A4 news and what's-on-guide delivered monthly to houses in West and North Swindon, contains several articles highly critical of the plans for the stadium. You can read them, messages from readers for and against the plans, and more background information, at the Swindon Link web site:

More information, including a report and photos of yesterday's protest, is available at the Swindon Forest Protection Group's web site: