Many of us have protested against Caterkillar in the past, on the High Street, at trade fairs, in their offices and in their factories (see links).

We have seen the error of our ways. 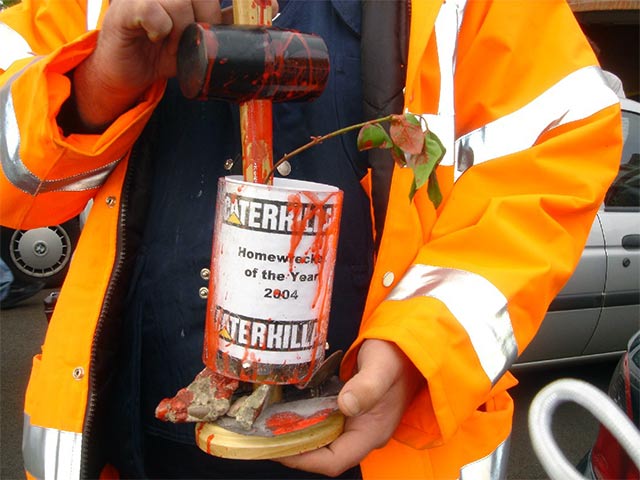 A work of art. How could they refuse? 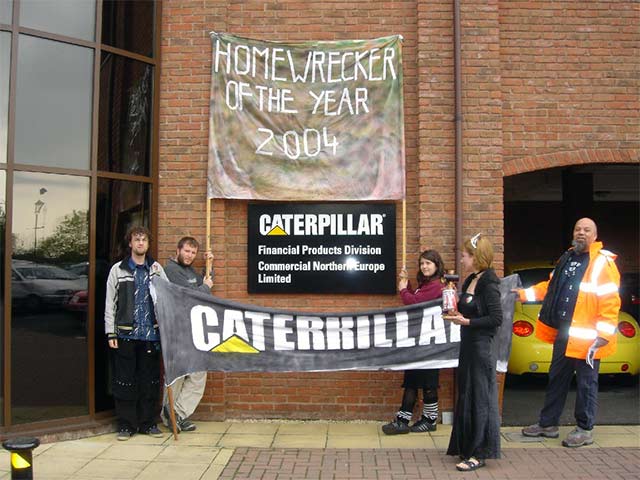 Setting up for the award ceremony 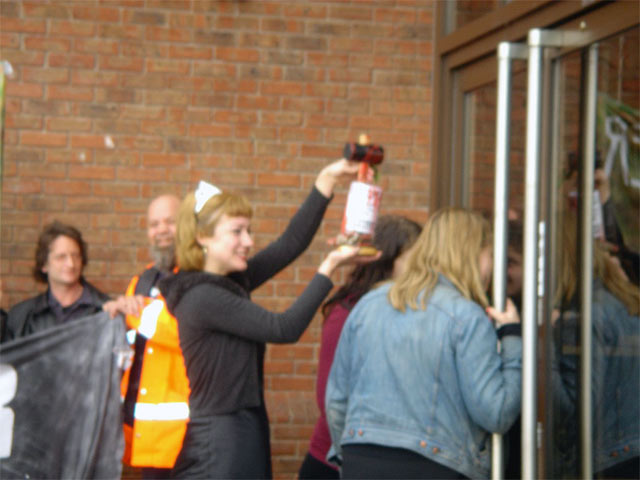 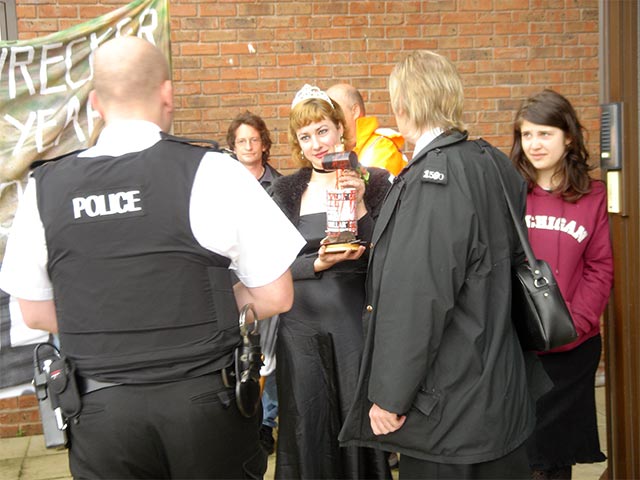 I think you'll find it's a public right of way, officer.

We now recognise that the company is doing an outstanding job – indeed it is a world leader in the conversion of civilian machinery for military use and amongst the best when it comes to extracting the generous subsidies available from the tax-payer to arms dealers worldwide (1).

Caterkillar deserves proper recognition for its outstanding contribution to the fields of home demolition, collective punishment, land theft and ethnic cleansing. On Wednesday, May 12th 2004 at 8.30am, we arrived at Caterpillar Financial Services (UK) Ltd near Solihull hoping to persuade them to accept the first annual Homewrecker of the Year Award on behalf of the company.

Oddly enough, by the time we had finished placing leaflets on all the staff cars and arrived at the front entrance for the official ceremony, Caterkillar security had closed all the entrances to the building. Undeterred, our beautiful hostess approached reception to explain the reason for our visit. Disappointingly, noone from Caterpillar would come out to accept the award. Modesty is such an admirable attribute.

The local constabulary dropped in to find out what we were up to. One of them declared the trophy a work of art and they went into the building to try to persuade Caterkillar to overcome its shyness and accept the award. Sadly, they could not be persuaded. We briefly left the premises when Caterkillar made it clear that they would prefer us to advertise their achievements to the general public on the main road rather than solely to their staff in the company car park. The police were, however, unable to enforce this arrangement as Caterkillar’s car park is, in fact, a public footpath. When this was pointed out to the officer concerned, he welcomed us back on to the property. With a smile, obviously.

We will try again tomorrow morning. With a bulldozer, maybe. If we’re unsuccessful, well there’s always the public footpath for a picnic and a bit of a sing song. We’ll let you know how we get on. This lot seem to be very shy though – so if anyone else out there wants to have a go at presenting the award for us – to the Caterkillar folk in Solihull, or maybe their colleagues at the Head Office in Desford near Leicester, or the MoD site in Shrewsbury, or perhaps the plant in Cannock – well, we’d be happy to help out. E-mail us at

1. CATERPILLAR D9 bulldozers are used to demolish homes in acts of collective punishment breaching article four of the Geneva Convention. They are also used in the building of Israel’s apartheid wall, splitting Palestine into a series of ghettos separating hundreds of thousands of farmers from their lands.

UNWRA recently reported that 131 civilian homes had been destroyed in Gaza in the first ten days of May alone. CAT financial corp report that company profits had risen by 41% to $457 million this quarter. While CAT’s profits rocket, CAT machinery is instrumental in the occupation – Israel is reliant on imported military machinery and has declared that it cannot hope to be self-sufficient in this area. The occupation relies on the greed and amorality of companies like Caterkillar.


Links to a few past actions: