May 9 2004: Anti-Trident protesters twice stopped a nuclear weapons convoy in Stirling and Balloch. 6 People were arrested. The protesters were from Trident Ploughshares, Stirling CND and Faslane Peace Camp.

Again a Nuke transport has been halted on the Scottish roads. The MoD regularly organises convoys to take Trident warheads to and from the Burghfield assembly plant to the Coulport store to be checked and maintained. Each warhead is believed to have the destructive power of 8 times the bomb which was dropped on Hiroshima. 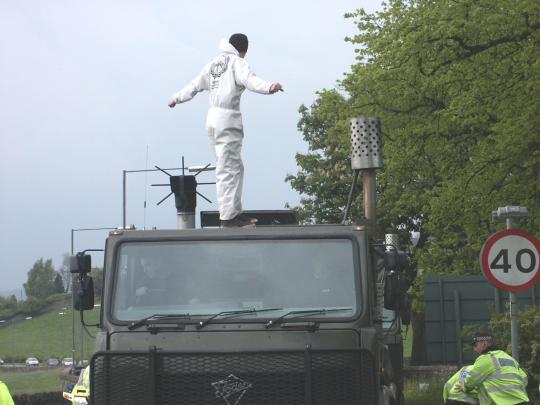 Any unusual activity at HMS Burghfield England, where the convoys begin is reported and when a transport leaves the plant an alarm is raised.

All possible routes of the transport are known and watched, convoys followed. Publishing the routes is illegal. But if ordinary people can obtain the information, could other - trained and not so fluffy - people not do the same? Scary thought, not?

London, Leichester, Nottingham, Leeds, Edinburgh, Glasgow and other densely populated area's are passed-by closely. Accidents happen sometimes, luckily not often. The last potential fatal accident was in December 2003 when a Truck -suspected to carry nukes- caught fire on the shores of Loch Long.

Let it be no surprise then that lots of people are prepared to risk life, Limbs and freedom to oppose these practises and to make sure as many people as possible know about these suicidal tendencies of the UK-goverment and establishment:

The first interruption took place just beneath Stirling castle. One activist waved the leading truck to a standstill and then climbed on top of its cab while others went in front to block its advance.

Four peoples freedom was taken away: Jane, Sam, Roz and Morag were arrested. All were released the same evening, but ordered to return to the sheriff court on Thursday.

When the convoy reached Balloch on Loch Lomondside there was a heavy police presence but in spite of this the convoy was again halted. Two people more people were arrested. The protesters were from Trident Ploughshares, Stirling CND and Faslane Peace Camp.

David, a Stirling CND member from Tillicoultry, said: "We were delighted that the convoy was held up in Stirling. We were able to explain to large numbers of passing motorists that they were close to Britain's very own weapons of mass destruction."

Protestors are often found guilty in the legal system but that does not deter them to carry on with this vital protest!

If you feel compelled to join one of these protests or want to organise your own with your affinity group: get informed, get trained, be safe and Stop Those Nukes!