Yesterday, we went to the Caterpillar offices near Solihull to present them with their well-deserved Homewrecker of the Year Award, and to ask the employees to take up the issue of arms sales to Israel with the company (see

Unfortunately, the employees were too shy to leave the building to talk to us. So this morning, we thought we'd join them for breakfast in the car park as they arrived for work. 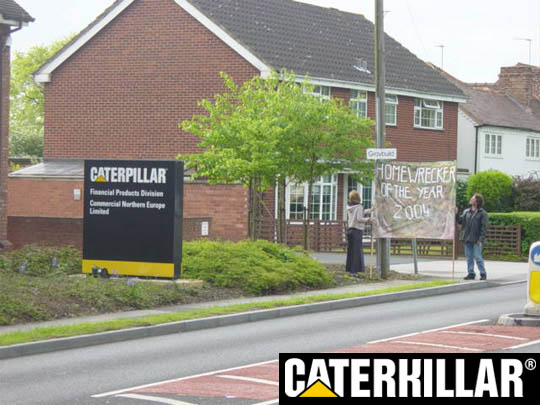 Caterkillar - Homewrecker of the Year 2004 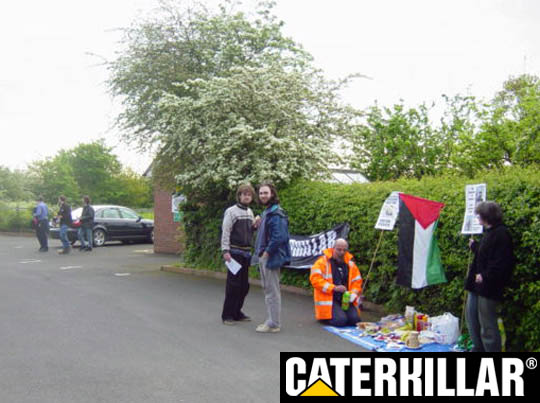 Come and join us for breakfast 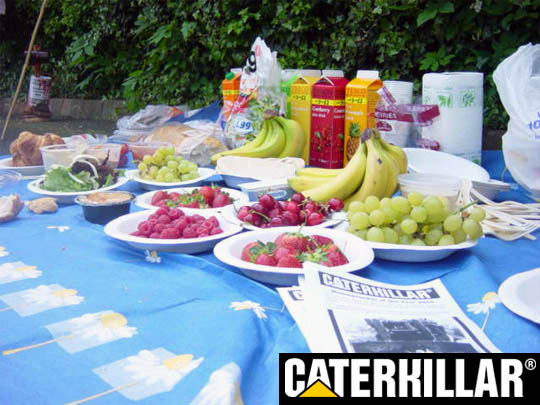 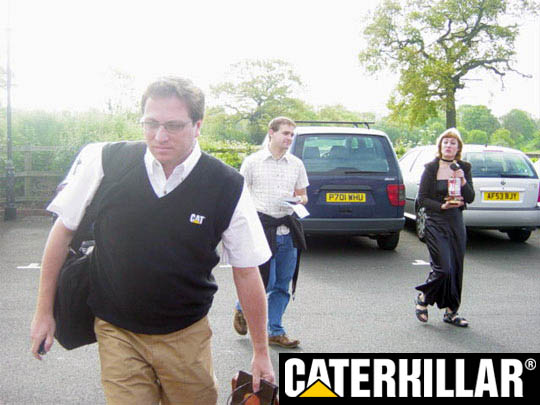 Security were evident as we arrived at 7.30am, but no attempt was made to prevent us from laying out our picnic. Soon afterwards, the staff started to arrive, and were greeted with plates of pastries and fruit, and, of course, that beautiful award that noone from Caterpillar seems to want to accept.

Local law enforcement attended the scene within a few minutes. They were interested to know why we were there, and asked if this was the only kind of protesting we did. So we talked a bit about the experiences we've had in the Occupied Territories, the families and communities we know whose lives have been dismantled by Caterpillar equipment. We talked about the fact that these are machines designed for military use in the Occupied Territories, supplied as weapons via the vast US military subsidies to Israel in direct contravention of Caterkillar's stated business policy. We explained that Caterkillar has failed to respond to repeated requests from activists to explain and justify its trade with Israel, and that we were here to share our breakfast with Caterkillar staff and talk to them about how they might influence Caterkillar's business practices.

The WPC said: "Makes our job seem a bit trivial really. We'll leave you to it.". A brief nod and a smile from her colleague and they drove off. Caterkillar security spent several minutes staring forlornly at the road after they left, as if expecting reinforcements to arrive any minute.

A few of the workers seemed a bit nervous to see us. Some of them even drove straight off, despite the tempting plates of breakfast foods awaiting them. Most smiled, at least. The postie was nice, and the delivery guy took one look at the leaflet and said "Oh yeah - you're dead right. Nice one". We managed to talk to a couple of the workers - clearly those who had not been around the day before and received company orders not to take our leaflets or talk to us. A quiet thoughtful American guy and a slightly more aggressive Israeli - both claiming that:

-- the bulldozers are civilian not military machines (so how come Caterkillar exhibit at DSEi and have an MoD site in Shrewsbury?) and that

-- Caterkillar are not responsible for how their machines are used (despite having a business policy which states that they DO take responsibility for the social, political and environmental consequences of their business partnerships?).

One guy said that we were wasting our time as Cat's Board are currently discussing this issue (interesting!), but got a bit confused when we suggested that maybe it would therefore be a good time for him to make his feelings known to the Board.


Anyways, we still have that award to present. If anyone wants to have a go, contact us at

Caterpillar Out of Palestine