‘Development Flows from the Barrel of a Gun’

This film presents and examines orchestrated state violence against indigenous and local peoples when they rally and protest against development projects on their lands. 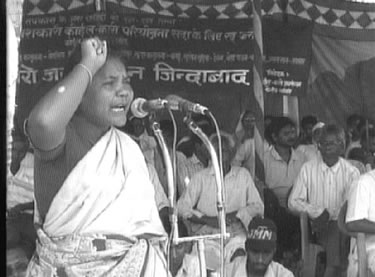 With examples from all over the country - an aluminum corporation in Kashipur; the big dam in Jharkhand; the World Bank-funded forestry project in Madhya Pradesh; the steel plant in Nagarnar; the new port in Gujarat, the film documents what happens when tribal people assert their basic rights to land, water and forest.
The development projects in question have been located on lands collectively owned and inhabited by tribal peoples. At the first hint of organised protest, the police are sent in. They loot and ransack homes, steal food and livestock, beat up women, arrest men and use their lathis, guns and bullets freely…
The filmmakers are activists in the indigenous people's movement against destructive development. Meghnath is a founding member of Akhra, an organization that works with indigenous youth. (Contact Meghnath/AKHRA

Indymedia is an independent network of media collectives dedicated to
empowering people to use print, audio, video or images to expose
inequities and inspire social justice. For further information: