Around about a fifty people joined the Kyoto March and Dinosaur Party in Edinburgh today, 15th of may. Starting at the Russian embassy at about 11 am, via Princes and Rose Street furry and fluffy dinosaurs were accompanied by "George Bush" with drums and slogans: SWhat do we want: Sign Kyoto! When do we want it: Now; as well as "1-2-3-4 we don't want your fossil war!" . Longer article will hopefully follow here soon -here are pictures and the original call for action. 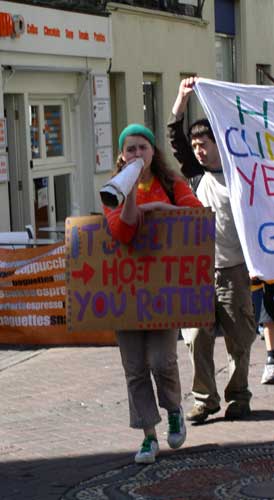 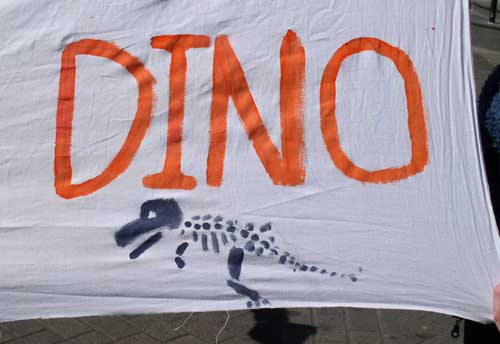 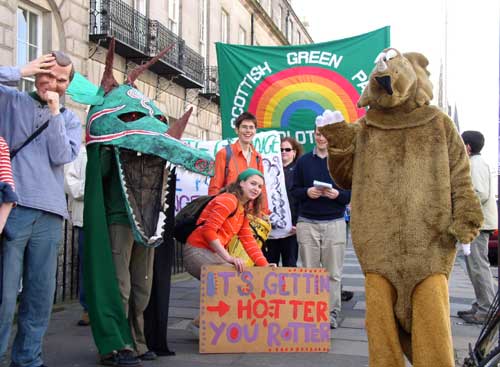 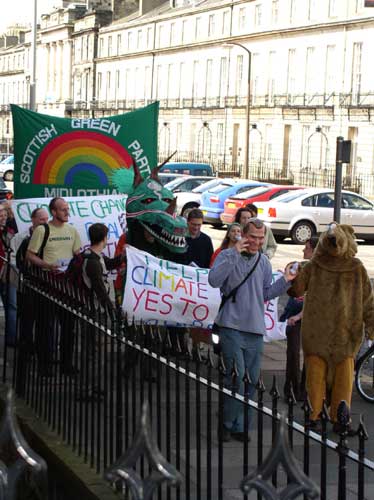 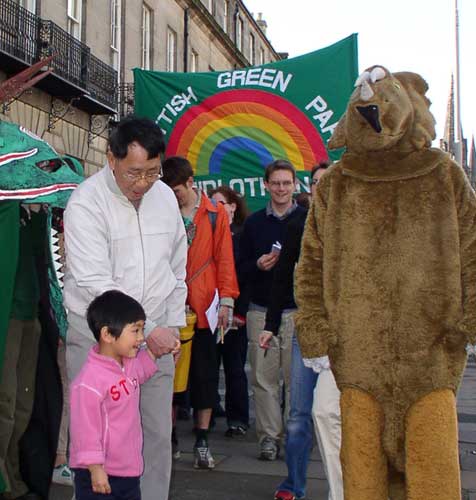 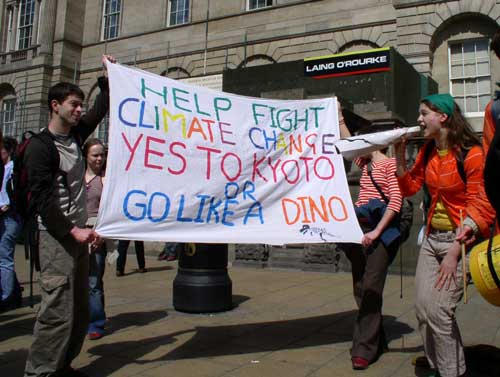 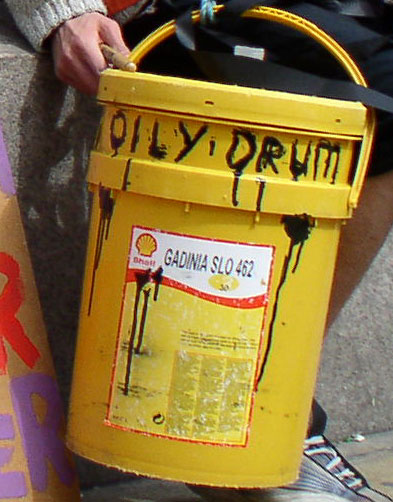 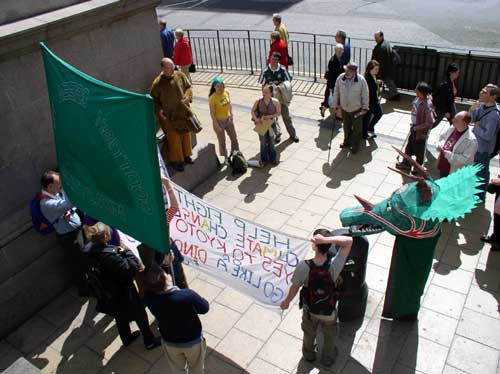 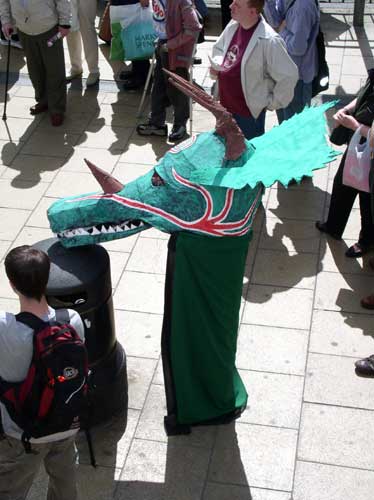 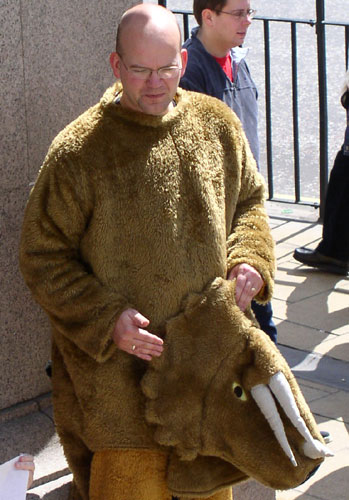 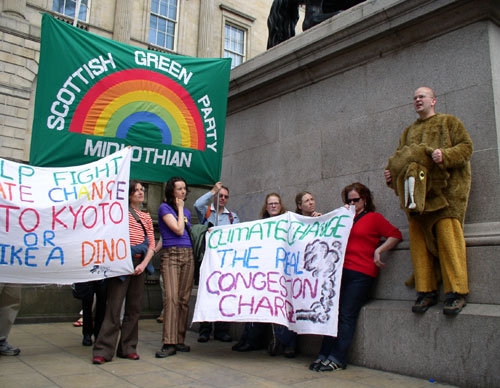 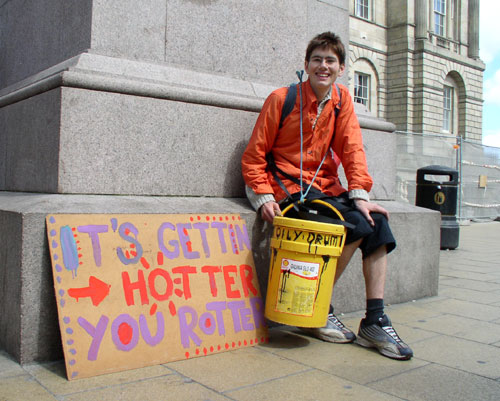 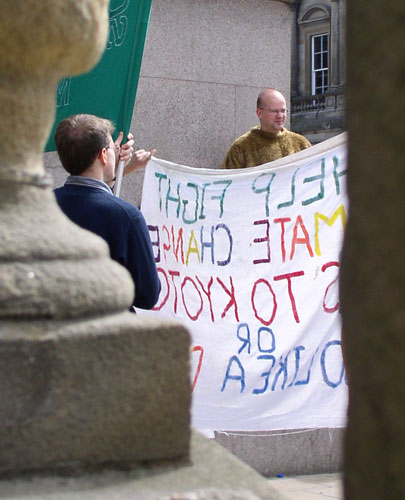 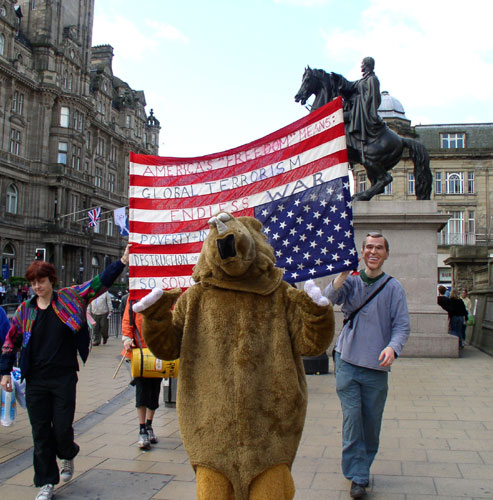 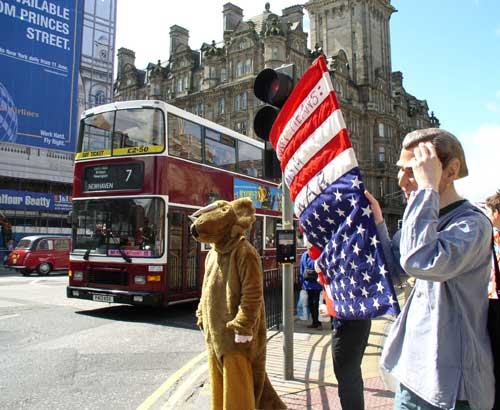 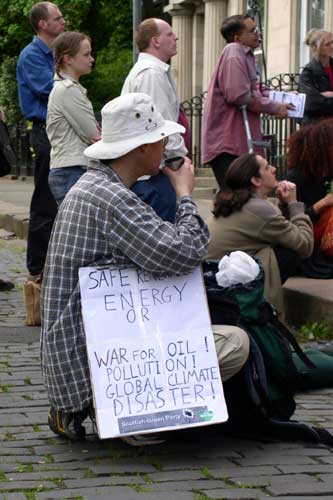 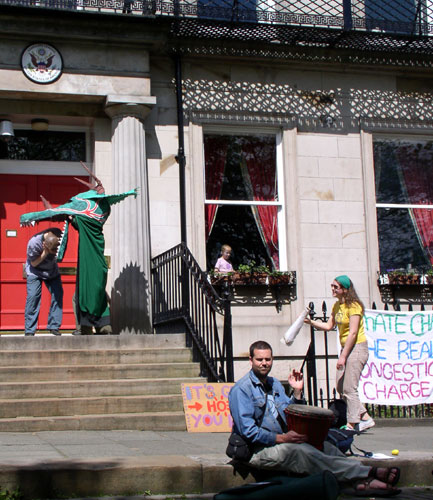 Bush gets eaten by a dinosaur 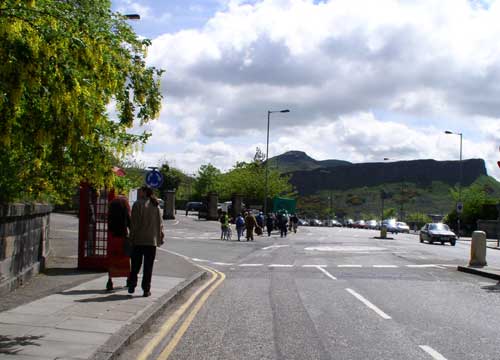 walk to the US consulate - demo from behind 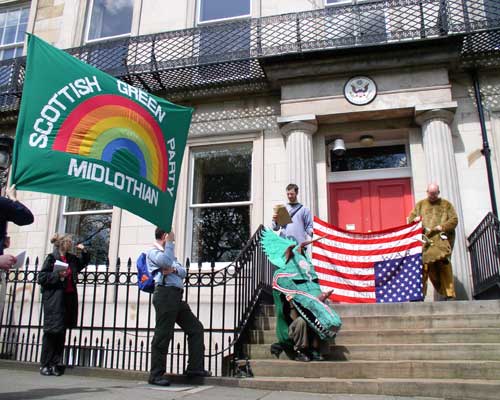 at the US consulate

…In solidarity with protests in London, called by the Campaign against Climate Change on 3rd anniversary of USA rejecting Kyoto treaty.

The Kyoto March is an annual event that enables people to get together and onto the streets to sound the alarm about the accelerating deterioration of the global environment and in particular the huge threat posed by the catastrophic destabilisation of global climate. It is a chance to make a stand against those with the greatest power who are most to blame: currently George W Bush and his backers in the US fossil fuel industry, who sabotaged the world's efforts to deal with global climate change by rejecting the Kyoto treaty 3 years ago. Our event marks the anniversary of that greatest of environmental crimes.

Even Tony Blair has admitted that there is "no bigger long-term question facing the global community than the threat of climate change", though his actions have not reflected these fine words.

The Kyoto Treaty is a first step towards reining in global emissions of carbon dioxide, obligating countries to reduce their carbon emissions to 1990 levels. Kyoto has been ratified by 121 nations, but to take effect, it must be ratified by nations that account for 55% of developing countries’ carbon dioxide emissions. The USA, the world’s biggest CO2 polluter (at 36% of worldwide emissions), refused to sign up in 2001 (it's 'too expensive'!). Current signatories account for only 44% of emissions, and only Russian ratification can now make the treaty binding (if the US continues to refute it). One advisor to President Putin, Illarionov, is pressuring the Government to reject Kyoto, the Russian Foreign Ministry has the final say on May 20th. In a world in which the sole superpower refuses to accept or address climate change as the single largest risk facing our planet's future, Russia needs to fill the environmental leadership gap.

Dress code theme (if you fancy it!): Dinosaurs (to demonstrate Bush as fossil fool and humans as endangered species if we continue with current rates of environmental destruction), extinct /threatened species, Oil/Coal industry Dinosaurs, Bush/Cheney Dinosaurs, or of course just identify yourself as a member of a threatened species! Plus anything that shows Bush, Uncle Sam, Exxon fat-cats etc ...as climate/environmental villains.