Lesbians and gay men from OutRage! and the Queer Youth Alliance joined
today’s demonstration in London to support the human rights of the
people of Palestine. But they also urged the Palestinian Authority to
halt the arrest, torture and murder of homosexuals. 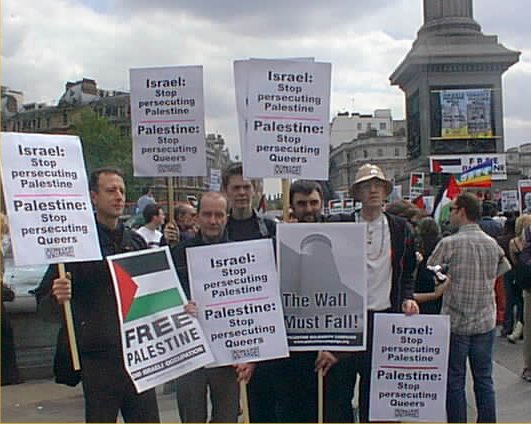 OutRage! joins the National Day of Action for Palestine

Attempt to silence debate on murder of gays

Lesbians and gay men from OutRage! and the Queer Youth Alliance joined
today’s demonstration in London to support the human rights of the
people of Palestine. But they also urged the Palestinian Authority to
halt the arrest, torture and murder of homosexuals.

As soon as they arrived in Trafalgar Square to join the demonstration,
the gay protesters were surrounded by an angry, screaming mob of
Islamic fundamentalists, Anglican clergymen, members of the Socialist
Workers Party, the Stop the War Coalition, and officials from the
protest organisers, the Palestine Solidarity Campaign (PSC). They
variously attacked the gay activists as “racists”, “Zionists”, “CIA
and MI5 agents”, “supporters of the Sharon government” and “dividing
the Free Palestine movement”.

PSC organisers asked the gay activists to “stand at the back of the
demonstration”, and when they refused blocked their placards with
their own banners and shouted down the gay campaigners as they tried
to speak to journalists and other protesters.

Most people at the Palestine protest expressed no hostility towards
OutRage! and the Queer Youth Alliance. Some expressed positive
support.

”We call on the PLO and Palestinian Authority to condemn homophobia,
uphold queer human rights, and to order an immediate end to the abuse
of lesbian and gay Palestinians", said OutRage! protester, Brett
Lock.

"Having experienced the pain of homophobia, we deplore the suffering
inflicted on Palestinians by the Israeli government”.

Another protester, Peter Tatchell, said:
"Gay Palestinians live in fear of arrest, detention without trial,
torture and execution at the hands of Palestinian police and security
services. They also risk abduction and so-called honour killing by
vengeful family members and vigilante mobs, as well as punishment
beatings and murder by Palestinian political groups such as Hamas and
Yasser Arafat's Fatah movement".

"These revelations come from the independent human rights watchdog,
B’Tselem, and from the Israeli gay rights groups Aguda and Open House,
which help gay Palestinian refugees".

The abuse of Palestinian gays has been confirmed by two senior
Palestine Liberation Organisation officials in conversations with
queer rights activist, Peter Tatchell.

"Both officials expressed personal regret concerning these abuses but
said their liberal views were not shared by the majority of PLO
officials and supporters", said Mr Tatchell.

"For over 30 years I have supported the Palestinian struggle for
national liberation, but it would be wrong to remain silent while the
PLO, Hamas and the Palestinian Authority are abducting, brutalising
and murdering lesbian and gay Palestinians. Freedom for Palestine must
be freedom for all Palestinians - straight and gay.

“Unless we challenge the abuse of queer human rights now, this violent
homophobia will become entrenched in a new Palestinian state and
Palestinian leaders will be emboldened to abuse the rights of other
Palestinian citizens", said Tatchell.