Breakfast with Caterkillar - Homewrecker of the Year

On Wednesday, May 12th 2004 at 8.30am, Caterpillar Out of Palestine arrived at Caterpillar offices near Solihull to present them with their well-deserved Homewrecker of the Year Award, and to ask the employees to take up the issue of arms sales to Israel with the company. Unfortunately, the employees were too shy to leave the building. So the following morning the protesters decided join them for breakfast in the car park as they arrived for work.

UNWRA recently reported that 131 civilian homes had been destroyed in Gaza in the first ten days of May alone. CAT financial corp report that company profits had risen by 41% to $457 million this quarter. While CAT’s profits rocket, CAT machinery is instrumental in the occupation. 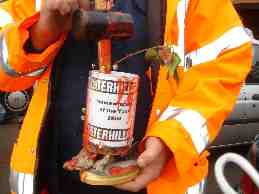