Marshalls - Ripping the heart out of the Peak District

A small group of dedicated protesters struck another blow at Marshalls PLC at their Mansfield Woodhouse storage depot on Monday 17th May.
A protestor managed to lock on to the gates despite struggling with security guards that Marshalls now have to employ, due to previous actions against them over their plans to quarry at the Nine Ladies and rip the heart out of the Peak District 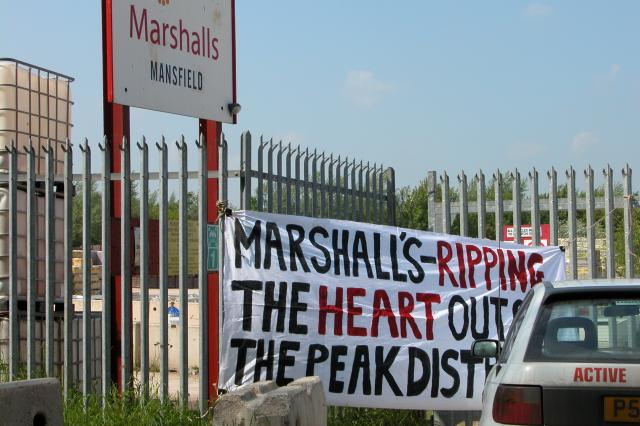 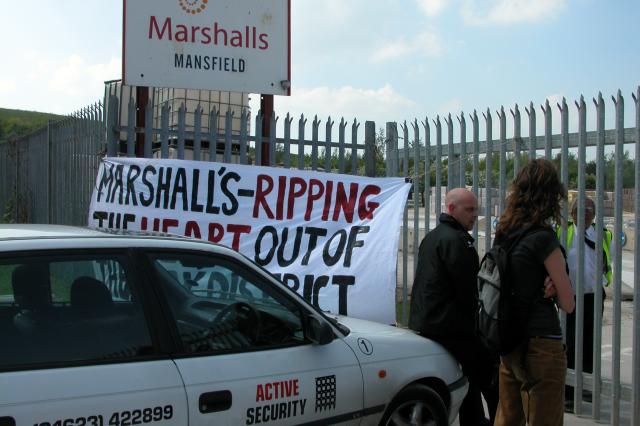 security didn't do much

The response from the security firm Active Security was swift to say he least, but then they are only around the corner. The staff at Marshalls behaved and were not heavy handed in any way and the security didn’t do a great deal to hinder us after a while the staff at Marshalls attempted to have a go at cutting the motorbike lock and surprisingly, succeeded. The protesters were let down by the claims that the lock could not be cut through with bolt cutters, they could.
Until next time, with better locks!
Marshalls is a huge multinational company specialising in landscape and construction materials, especially stone. Marshalls is a particularly 'hot' target at the moment as its subsidiary Stancliffe Stone is behind the plan to quarry the hillside below Stanton Moor, right next to the Nine Ladies Stone Circle. This insidious plan to quarry a place of rare natural beauty in the middle of the Peak District National Park has been up to now unsuccessful due to the fight put up by the people at the Nine Ladies protest camp. Marshalls however has recently stepped up the pressure to evict the camp and go ahead with the quarrying.