The Silencing of America: Americans Are Afraid of Bush’s Violent Regime 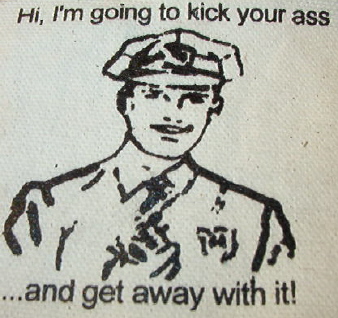 The Silencing of America: Americans Are Afraid of Bush’s Violent Regime
By Kirsten Anderberg (www.kirstenanderberg.com)

George W. Bush has done more to scare Americans into silent complicity, and rip free speech from the American fabric, than any president I have seen this lifetime. Creating “no protest zones” patrolled by American riot squads, aiming high-powered weaponry on unarmed American people TRYING to exercise free speech, it is clear Bush’s regime is NOT supportive of free speech rights, no matter what babble comes out of his mouth. Bush supports free speech as long as that speech supports everything he does blindly, like the “pro-war” protesters. As a matter of fact, Seattle Police Chief Kerlikowski even said on public radio that he and his force treat the pro-war protesters differently than the anti-war protesters (without the riot gear and intimidation factors) because the police perceived the pro-war protesters to not be hostile to the police. What would be a reason for that Kerlikowsi? Perhaps aiming machine guns at unarmed children in permitted protest zones, and shooting off concussion grenades and pepper spray from canisters the size of fire extinguishers at their moms, sort of soured the mood between the anti-war protesters and police? Ya think?

Does free speech mean you have the right to say anything? No, it does not. You cannot yell “fire” in a crowded movie theater, for instance. Hell, you cannot sing feminist comedy outside the Biergarten in Santa Cruz, Ca., without getting obscenity tickets from police. Does free speech mean you can do it anonymously? I am not sure about that either, since an American exercising free speech can be FORCED to produce identification for American police at any time. Does free speech cost money? Sometimes, yes. At the Pike Place Market in Seattle, Wa., if you want to give a political speech in that Public Market, you will be required to give the City $25 for those free speech privileges in the public square or be arrested for trespass. I am actually confused as to what those boys ARE fighting for in Iraq. I keep hearing “freedom” as the reason. Americans are killing people, and people are killing Americans, over “freedom” but I do not know what that rhetoric actually means.

Freedom: it is a term governments throw around like religions throw around the word “faith.” It is an illusive concept at best, as freedom for one often is not freedom for another. Freedom for the American settlers to steal land from the American Indians and then kill those who would not just vanish and give their lands to the “free” settlers, was no freedom for American Indians. Many Americans, myself included, do not believe the reason we are in Iraq is to “fight for freedom.” We have enough work to be done on that front in America, what with skyrocketing homeless rates, children going hungry, wage slavery, the abuse of the elderly, the poor, and vets, the gigantic class chasm between the social classes, the racism and sexism, cutting social programs to build up the military for Bush, the Conqueror…As a matter of fact, the Bush regime has done more to FIGHT FREEDOM IN AMERICA than any president I have witnessed as an adult. I have never felt I was taking such great risks to my own safety for so little in years prior. Simply using free speech in America is frightening and takes courage nowadays. Not since the Vietnam War have such violent police and “intelligence” behaviors hit American streets as has been routine in the last few years since Bush came to the throne. And the Vietnam War protests took decades to heat up. This war is less than one year old and America is ripping apart at the seams over Bush’s oil war.

So let us see how free speech works in America. You are a citizen like me. You think this war is sick, so you go out to the public square when the war is declared and decide to USE FREE SPEECH to hold a big NO WAR sign. And you are met with a thousand riot police dressed like Darth Vader with baseball bat-sized clubs in their hands, thumping their palms anxiously in a row, drooling, so to speak. These riot police have hidden all identifiers and refuse to speak or follow the law, as per Seattle Muni Code 3.28, and identify themselves when asked. People are scared and leave with their children. Chaos and fear is present due to these riot police. A climate of fear, anxiety and terror surround the permitted protest zone. A group of protesters decide to march. They leave on the sidewalks, following all traffic lights, crossing with the lights. All of a sudden, riot police start blocking them off and forcing them to block sidewalks and into the streets. Unarmed people, 300-500 people, are then falsely imprisoned for breaking no laws, and contained and abused by this mob of non-talking, violent Robocop Darth Vaders. We are not allowed to leave, we are never warned we will be contained. We are not told what the Robocops wanted, they hit people until they bled, they have no organization, they are like terrorists, is all I can say. This exact scene happened on March 22, 2003 in Seattle, Wa. Those American cops embodied FEAR, FIRST AND FOREMOST, TO THE AMERICANS THEY WERE UNLEASHED UPON, myself included. That was what those Robocops were there for, TO STRIKE FEAR INTO ANY AMERICAN WATCHING, OR PARTICIPATING IN, ANTI-WAR ACTIVITIES. The police and government committed crimes against anti-war protesters on March 22, 2003, whether or not they broke any laws. And it made me ANGRY, not AFRAID.

And due to this violent, oppressive police behavior, a bunch of self-appointed peace police emerged from within the Seattle protest community. Paternalistic “peace police” who basically coerce the protesters into doing whatever police say, out of fear of violence from the police. There will be no militancy at ANY U.S. protests and the police almost have the peace community trained now to keep its own people silenced and subdued…I am called an “instigator” when I go to Seattle protests, for example, for merely trying to get police on the scene to identify themselves as required by law. So I do not go to protests in Seattle anymore, as they are more a show of complacency and submissiveness to the state, than any protest of state policy. The same people keep usurping the security positions at these Seattle protests, the same security people who led us into the bloody batons of the riot police on March 22, and also June 2, 2003 at the LEIU protests. I will not let those “Peace Police” lead me like a lamb to the slaughter for Seattle Police to abuse and assault anymore. The situation has gotten to one of police say who they will or will not attack at protests, and they have effectively caused a chasm between the protest community because the self-appointed peace police have let them. So now, the Seattle Police, at least, have a coalition of Judeo-Christian home-owning SUV-driving people calling themselves “peace protesters” who basically refuse to “protest” and condemn and squelch anyone who does “protest,” while running all “security” for the protests, as if they were appointed by someone to keep peace with police, not protest for peace for the world.

And “free” America supposedly supports this trend of law enforcement agencies COMMITTING CRIMES ON AMERICAN STREETS in the name of preemptively stopping possible crimes. Hmmm. Let’s see, with that method, in the end, you end up with two sets of criminals at “best,” one set of criminals at “worst.” I heard Condi Rice testify that we need to preemptively treat people like criminals to stop crime. That is very very NOT FREE. What our government does not seem to get is we do not need their PERMISSION to SEE THEIR ABUSE! Once you abuse someone, such as the masses of souls enraged from police overkill and random, chaotic violence at WTO in 1999, you can talk until you are blue in the face about freedom of speech and American freedom, but the eyes of those listening are glazed over with anger, they are not buying it. THEY KNOW WHAT THEY SAW POLICE DOING TO UNARMED PEOPLE ON AMERICAN STREETS AND THEY ALSO KNOW THE POLICE GOT AWAY WITH IT IN THE END TOO. So THEY DO NOT TRUST American police anymore (if they ever did). I am not buying this crap about free speech in America. It is not free speech when you unleash unaccountable nameless armed troops upon peaceful protesters in the public square. That is the EXACT OPPOSITE of what America claims to be FREEDOM.

So where is the free speech in America? It is not in my city. You can speak “freely” as long as you do not condemn the Bush regime or the Iraq War. Then you may invoke the wrath of swarms of violent, armed, riot police, Homeland Security, the Patriot Act, the CIA and FBI, and God knows what in the world they are doing unaccountable to the world with their hidden prisons where I am sure everything is on the up and up, where we are teaching FREEDOM to people who THREATEN freedom, supposedly. Where are my free speech rights in America? I do not know. Did I ever have any free speech rights as an American? Was this one of those things where they duped us into thinking we had free speech rights right up until we really needed them? Or did they never exist and it is one more bullshit line America feeds the world to justify its voracious hunger for capitalist extraction and exploits? Why are so many people AFRAID to speak up in America today? When I read comments to my articles on anarchist or radical internet forums, and very few are using real names and email addresses. Most are saying what they feel ANONYMOUSLY. OUT OF FEAR. And I use my name as a silent way to say “I AM NOT AFRAID.” I am sick of being bullied out of my free speech rights. If this country is going to spew “free speech rights” as one of its glories it is killing to bestow upon Iraqi people, then it better look at the mote in its own eye (to use its own Christian crap) before it goes “fixing” others’ problems! Freedom of Speech is DEAD in America. If you DARE to speak out, with your real name, you know, as well as I do, you are in danger, not from “terrorists,” but from the U.S. Government, the Bush Regime, Tom Ridge, and all of the cast of clowns with nothing else to do but spy on Americans PREEMPTIVELY, committing crimes certainly, to “maybe” stop somebody else from breaking laws besides them!

ultra nationalism thrives among citizens afraid of their rulers