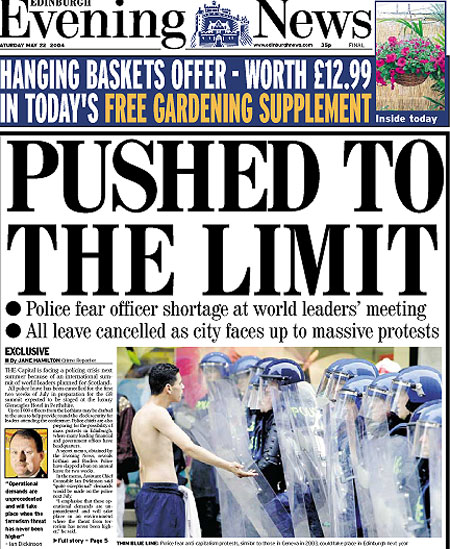 frontpage of Edinburgh Evening News 22nd of May 2004

EDINBURGH faces a massive shortage of police cover next year because of an international summit of world leaders planned for Scotland.

All police leave has been cancelled for the first two weeks in July in anticipation of the G8 summit due to be held at the luxury Gleneagles Hotel in Perthshire.

Up to 1000 officers from the Lothians may be drafted to the area to help provide 24-hour cover for world leaders attending the summit.

But there are fears that security will be so tight around the hotel that mass protests will instead be held in Edinburgh, where many leading financial and government offices have headquarters.

The annual summit assembles leaders of the world’s major industrial democracies - Canada, France, Germany, Italy, Japan, Russia, the UK and the US - to discuss international economic, political and security issues.

A secret memo, obtained by the Evening News, reveals Lothian and Borders Police have slapped a ban on annual leave for two weeks.

Even officers who have booked holidays in advance next July will be asked to cancel them. As well as assisting in the national security effort, local police are also facing the prospect of thousands of anti-capitalist protesters descending on Edinburgh to demonstrate at the Scottish Parliament, the Palace of Holyroodhouse, banks and foreign consulates.

Scotland has around 15,000 officers - and at least 9000 of those will be required to protect world leaders who attend.

Police sources said planning for the summit was "creating a headache" within the force and already some officers are claiming it is too late for them to back out of holiday plans.

The source said: "As well as coping with the added security for demonstrations and protests, police officers will still be expected to carry out their normal duties and police the city.

"Some officers are already claiming they have booked holidays for next July, but we find that hard to believe, although you can understand people are frustrated.

"The cancellation of the leave will put more pressure on periods either side of July 1-14, and it’s going to be a complete mess with lots of people scrambling to get their holidays."

However, the assistant chief constable in charge of specialist operations at Lothian and Borders Police, Ian Dickinson, said a year’s notice was enough for officers and support staff.

In a memo issued to divisional commanders and department heads across the force, Mr Dickinson said: "In early July 2005, quite exceptional operational demands will be made on the force. I emphasise that these operational demands are unprecedented and will take place in an environment where the threat from terrorism has never been higher."

Mr Dickinson added: "No annual leave will be granted for police officers. Any such leave that may have already been granted may, subject to the exigencies of duty, need to be cancelled."

The memo said support staff would also be affected and exceptions would only be made for staff whose personal circumstances dictate an emergency need for leave, such as marriage or bereavement.

"A restriction such as this can place considerable demands on families - particularly during school holidays.

"It is for this reason I am circulating this requirement with over a year’s notice so that all affected may make plans as far in advance as possible," the memo said.

But a police source warned: "The force may need to implement our full counter-terrorism arrangements, which are very resource intensive on both police and support staff, making everyone almost indispensable."

A spokesman for Lothian and Borders Police said the force could not comment on the issue. Early speculation that the meeting would be held in Scotland has already led to the creation of new anti-capitalism groups.

One states on its website: "In 2005, we want to make the champagne-sipping elite inside the G8 tent sweat. We want them to feel under siege."

Scottish Tory Leader, David McLetchie said: "It’s obviously a very prestigious event to come to Scotland and these plans by the police also illustrate the massive security operation required when the most powerful leaders in the world come together."

The MSP added: "It underlines the dedication of the police service in making sure there is the highest level of security, not only for the dignitaries, but also for the public."

This year’s G8 summit is to be held next month in the US at the five-star Sea Island resort in Georgia.

Having talked about one of the more alternative festivals, I will now talk about one of the most mainstream events that Scotland is likely to hold in the coming year: the G8 summit, which, rumour has it, will be held at Gleneagles. The amendment in Chris Ballance's name talks about "environmental and community benefits". We have to recognise the major concerns in the communities around Gleneagles about the impact of that event, and every effort must be made to minimise the event's impact on those communities.

We also need to recognise that thousands of people will be coming to Scotland to express their legitimate right to dissent, demonstrate and call into question the actions of the G8 members. It is vital that we recognise that there will be a need for infrastructural support to cope with that. We need to recognise the legitimacy of that alternative event and to allow the proposition that there is an alternative model of economic development to that which is pursued by the G8 members to be given its proper space.

From the Official report of the Scottish Parliament
(

further discussion in the Scottish Parliament about a potential G8 summit


S2M-612 Roseanna Cunningham: Potential G8 Summit at Gleneagles—That the Parliament notes reports that Gleneagles is being considered as a potential venue for a G8 summit meeting;
expresses concern at the disruption this could cause for strategic road and rail links and the negative impact that would have on both the local and national economy; recognises the immense pressures that would be placed on police by the scale of the security operation required; supports the bringing of international events to Scotland but believes that the G8 summit represents a poisoned chalice, and regrets that the decision to consider Gleneagles appears to have been based on a belief amongst the Foreign and Commonwealth Office that Gleneagles is remote.

S2M-612.1 Carolyn Leckie: Potential G8 Summit at Gleneagles—As an amendment to motion (S2M-612) in the name of Roseanna Cunningham, leave out from "expresses" to end and insert "and would welcome the opportunity to help organise mass protests in Scotland against the G8 summit, which has established itself as the forum for the world’s dominant powers to further entrench their domination and develop ever more imaginative schemes to undermine and manipulate the developing nations of the world and further widen the gap between rich and poor, currently concentrating 90% of the world’s abundant wealth and resources in the hands of only 5% of the world’s population."

picture of the Hotel

picture of the hotel

Hmm, some interesting scenarious for action....a day of blockades followed by a day of demonstrations and civil disobedience in edinburgh? Two days of rolling blockades? Although the leaders will be staying at the hotel, pretty much everyone else involved in the summit will have to travel from elsewhere - this is how the summit could be severely disrupted.

One can download (via Bit Torrent) a video concerning the G8 summit
being held in Scotland. Is a footage mix with Gleneagles reccie and last year's anti-war demos.

Bit Torrent for smooth download of actual 75MB file that can be more
easily resumed. In fact one can download over several overnight sessions on dial up.

Save .torrent file from

http://www.scotland.indymedia.org/usermedia/torrents/g8promo.mov.torrent
to where you want movie file to be stored on your computer.

Bit Torrent comes set up as part of BLAG gnu/linux (

Then open .torrent file and save video to same directory as promoted.

Also you may need quicktime installed to play this video file.

gnu/linux users can use mplayer

A VP3 version will be made available at some point via