When nearly 1000 pro-Palestinian activists gathered opposite Downing Street gates, little did they know that they would see a truly momentous attempt at a mass sitdown end with Police lifting and shoving demonstrators around. Even Jeremy Corbyn MP suffered perpetual pushing from police who were increasingly keen to move the barriers closer to the kurb. 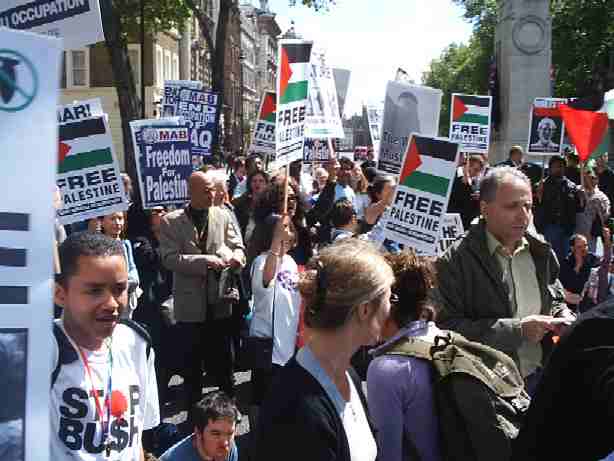 The crowds gather on the road. Most people stood up till the police got to work. 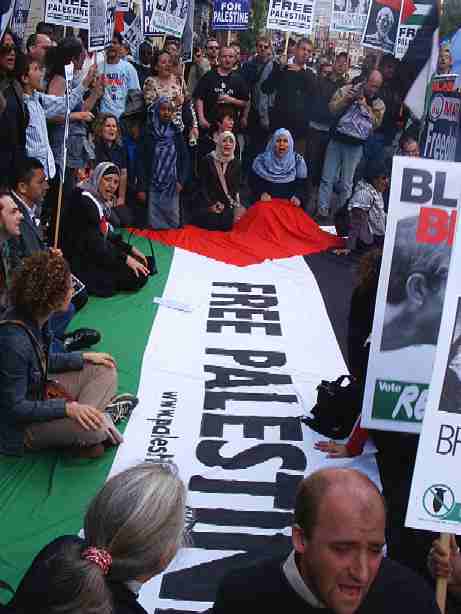 Large flag from previous weeks demo. Rumour has it the police ripped it badly. 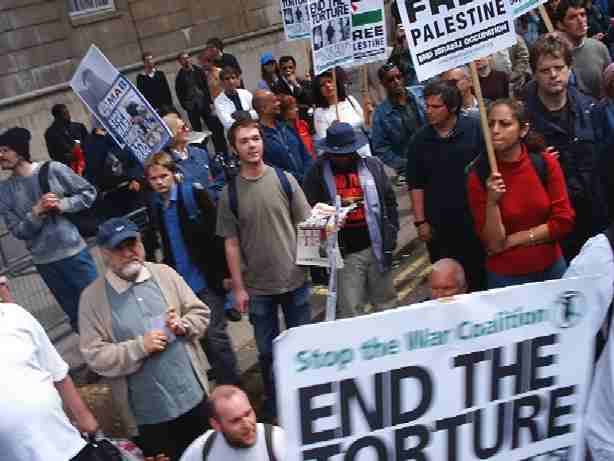 More people milling around in the street. This weeks paper, anyone? 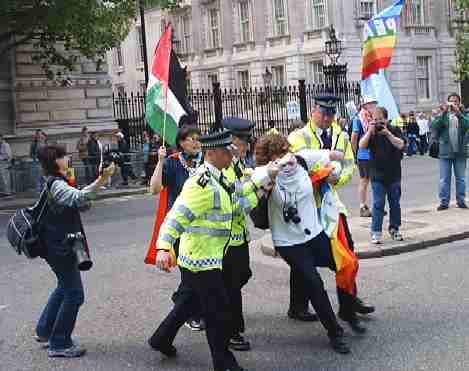 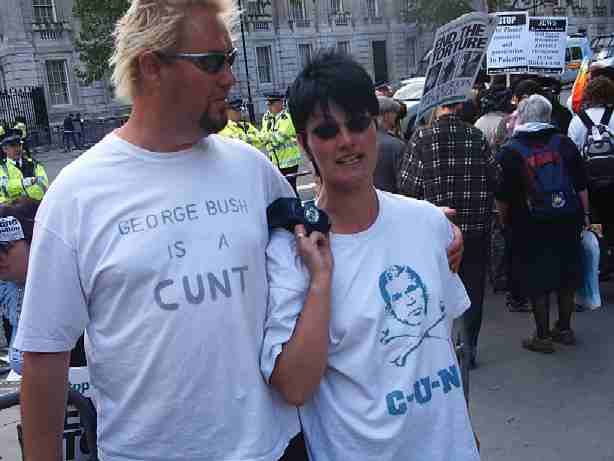 When we reached the site of the action, demonstrators were congregating behind around 50 meters of barriers, which the police were obviously only just putting in place. Half way across Whitehall, they were assembling another line, which would, it turned out, come in rather useful as a tool of repression. Word went round that some activists were considering ceasing the road, and when the initial surge took place, even leading lights in the SWP didn't quite realise what was coming (and Lenin said revolution wouldn't come. Two weeks later...)

The crowd hastily moved into position on the road, causing police to shut one half, and creating a road block 10 meters out into the road by some 30 meters long, at which point the police dragged across their assembled barrier, and used it to cordon the demonstrators. When a woman broke free and moved across the road, the police surrounded her and marched her off, presumably for arrest. At one point it seemed as though the police used a public service bus as a visual shield between the protesters and the new arrestees. One failing of the demonstrators was the lack of apparent attempts to form a solidarity picket at Sloane Sq Police Station (might have the name wrong).

As time drew on, chants changed, bottles of water were shared, and the police started to get impatient. The head of PSC made a speech in which she announced that we would be moving on at 3:30pm, but immediately afterwards, the police begun 25mins of near continuous attempts to clear the road. Working in from both ends and pushing on the road side; so much so that a senior SWSS official fell on top of PSC's leader. This all happened within metres of Jeremy Corbyn MP! Also, the police paused their work everytime a bus went by, especially for tourist buses. Seems they weren't too proud of their work after all!

The last few people managed to remain in the road just until 3:30pm, but by then, the police had everyone on their feet and were just pushing everyone back to the pavement. We did see one or two attempts to reclaim the street (no pun intended), and someone, at a point I cannot remember, attempted to walk in front of a bus with a placard, in a way which reminded me only of the film of Tienamen Sq, with the guy in front of the tank (perhaps I'm over reacting).

From a personal point of view, this was the first time I had been carried away from a road block. The police used usual methods of elbow manipulation to unlink me from my nieghbour, and the megaphone which was on my lap fell between my knees, and I lost grip of the hand set. I ended up basically being told to get up, and did so as I was completely surrounded by around 6 police. They then shoved me towards the pavement, which didn't work too well, as this meant pushing me against a large number of people already assembled in my pathway.

When I was reunited with my own megaphone (having been handed the other one by a stranger), I started some wonderful rant at the police about how they had broken up a perfectly peaceful protest, which cars were infact able to move around, just 20 minutes before it was set to end. It was then that I realised just how many people were around. As the crowd started to disperse, and gaps appeared on the pavement, I could see even further, and this hinted at a number approaching the 1000 mark, but not quite. That the police felt they had to break up such an event, despite the end being in sight, gives the impression they were looking to repress the issue. However, like driving tanks around a refugee camp makes Suicide Bombers, the police repression today only seemed to make people more determined to act. Perhaps police aggro has its place afterall.

For the benefit of novices, here's my tips for sit downs:
-If you don't want to stand on the road, stand on the edge of the pavement, and only let people through if they obviously want to. This slows people down if they don't want to go.
-Link arms; the police know how to unlink you, but it does make things look better.
-Stay calm, and try to ignore the police. If they pick you up, try to relax. Anything else, and you risk hitting them inadvertently and being arrested for it. Otherwise, you'll find yourself on the pavement and free to move on (normally speaking).
-Have a demo buddy. Always very important; and never leave the area without establishing where your buddy, and preferrably where all other friends are, unless forced to.
-Don't have your mobile on your belt unless it is absolutely fixed in place. Thankfully the police found mine, but not before the screen was scratched!