Fisher Scientific embarrased at Lancaster University over their links with HLS

A group of activists found out that a supplier of Huntington Life Sciences, Fisher Scientific, were to be holding a exhibition/stall in the Foyer of the Envorinmental Science Building so went to give them some company...
We decided that as they were coming to our university, that we would give them some friendly, peaceful, company.

Fisher Scientific supplies lab equiment to Huntington Life Sciences in Cambridgeshire. It has been requested that the company sever its links with the sick animal torturers at HLS but have yet refused.

A group of four of us took some leaflets and a banner and set up next to their stall, much to the dismay of the staff at the stall - who promptly asked for security. We handed out leaflets and spoke to some passers by, as well as the staff from FS.

After a while, security arrived at the scene and tried to get us to move. As we were students ourselves we refused to do this. This meant that more security was called and also the Police.

After a while of waiting for the police to arrive, they discussed with the security staff that they wouldn't do anything as the manager of the building had said we could be there. This really annoyed the security with threats of 'reporting us to the university' etc...

Not many people stopped at the stall whilst we were there.

We asked again that the FS staff request that their bosses pull the company out of HLS. 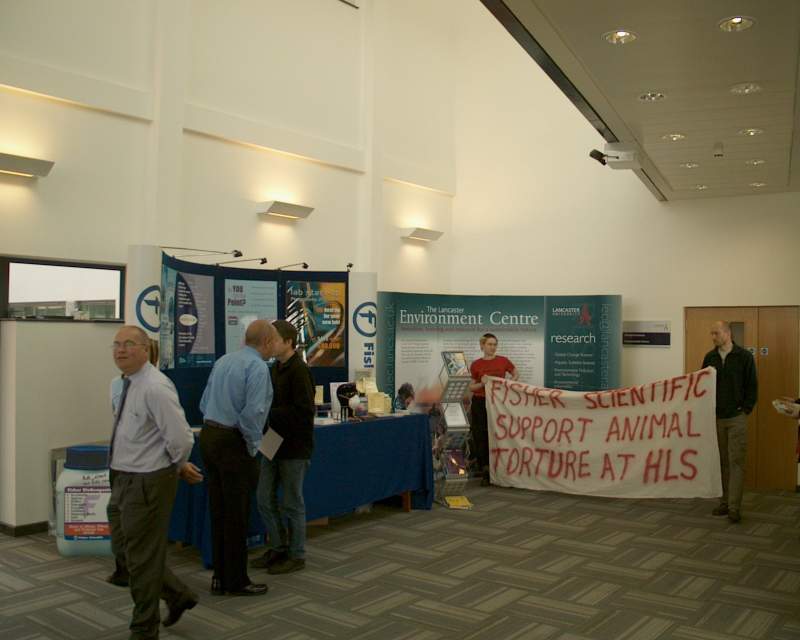 First Reaction as we set up... 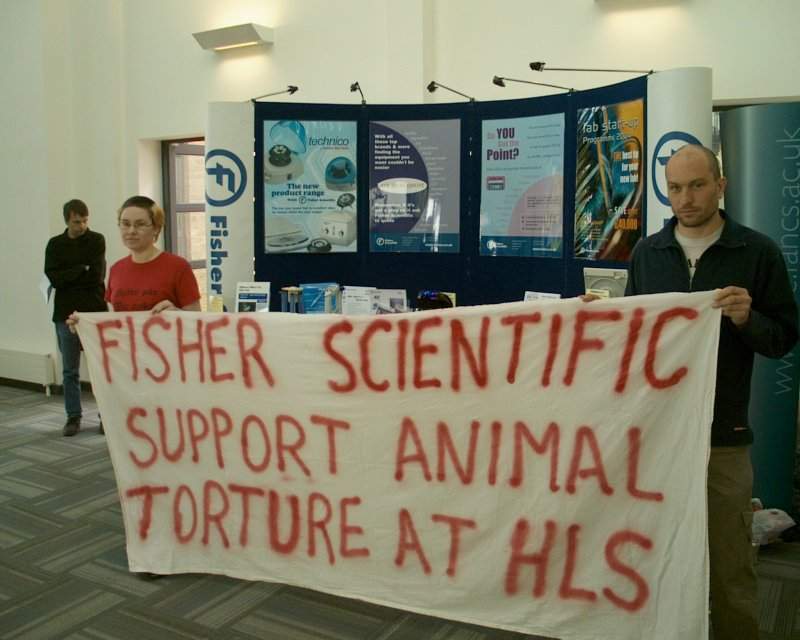 In front of the stall later on...

Here are some pics of the demo.

Fisher Scientific are also a supplier of Sequani animal testing labs, Ledbury, Herefordshire. No doubt they supply more companies that molest and murder animals under the bogus guise of research and development.

nice work!
if this is a feature, can someone make the manchester critical mass a feature too....? since it was good....yes?

Save animals not people

Excellent work. The sooner these people stop experimenting on animals the sooner we can slow down scientific research into disease, its causes and cures.

I certainly wouldn't feel right accepting life-saving treatment which had been developed at the expense of defenceless animals. I'd much rather die, or actually more accurately, see other people die than hurt a poor likkle mouse.

I bet you guys have all taken paracetamol for the odd headache - that was originally tested on animals. And had all of your childhood vaccines? Yes? Well you may as well kill yourselves now then! Wake up guys...do something constructive with your lives...