Summit Comes To An End With Violent Repression In Guadalajara

The Third Summit of Head of States and Governments from Latin America, the Caribbean and European Union (III ALCUE) has come to an end last night in a tense environment, and with a soft and indirect condemnation to the US military torture in Iraq, commercial agreements without popular support, violence against demonstrators at the end of the general demonstration and around 100 detainees and disappeared, as well as 30 injured. [Call for Solidarity, Update 31.06.2004] 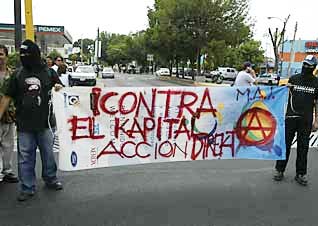 According to the latest reports during the early hours of the morning, some demonstrators were freed, although around 70 people are still detained. In a press conference held today at noon in Guadalajara rumours of torture and ill-treatment on the detainees were confirmed. It has been described that people were beaten, insulted, etc. while being taken away. When they arrived, men were separated from women; women were totally undressed and obliged to adopt strange positions while police kept opening and closing the door. Men were kept on the floor, with the hands on the back of their neck, for more than three hours, and they were kicked and jumped upon. While detained, it was heard that foreigners should be freed the soonest, so as to avoid problems with the embassies.

This was announced by one of the female detainees, who lives in Guadalajara, and who was at a bus-stop after taking part in the march and who was picked up by her parents, as well as by a journalist from an organisation. It seems that some of those detainees who come from Guadalajara have been let off from 3 am onwards, according to official information, and about those who were disappeared, we still do not know anything. This shows a sign of retaliation and hatred from the authorities towards any of us.

The NGO’s and Trade Unions did not want to be tied to any of this.

Of those injured we know that nine have already left hospital and two have viscera injuries and skull damage.

In the negotiations, the authorities - who still have not handed in a list with detainee names- ask the demonstrators to vacate the city immediately, not to carry out any more mobilizations and to pay for all the damage caused in banks and shops.

It is urgent that this information is passed on and that other mobilizations are organised to demand the liberation of the detainees, about who it is rumoured that between 9 and 15 will receive serious legal responsibilities. From the Centre of Independent Media (CMI Guadalajara) a statement has been issued in different local, national and international means, so as to put pressure and speed up the resolution of the arrests. A PayPal account has been set up to receive donations for the legal process.