The STOP march (Swindonians Together On Planning)

In a show of unity, campaigners and residents from across Swindon marched into the town centre by various routes, converging on Swindon Borough Council's civic offices for a rally addressed by speakers from local campaign groups and organisations and Swindon South's MP Julia Drown. Photos are from the Shaw Forest leg of the march. 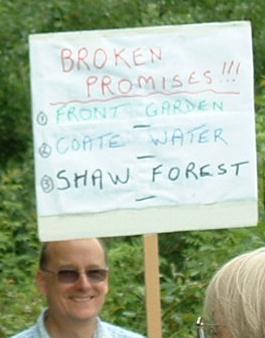 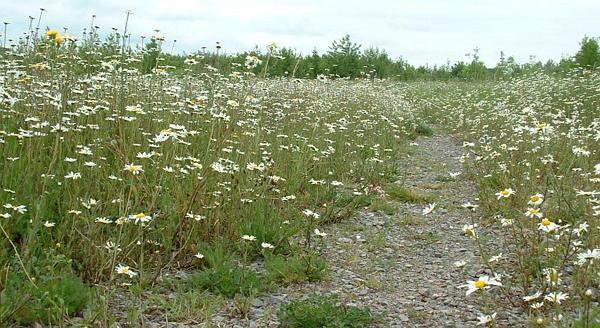 Phase 1 of Shaw forest, viewed from phase 2 (not planted yet) 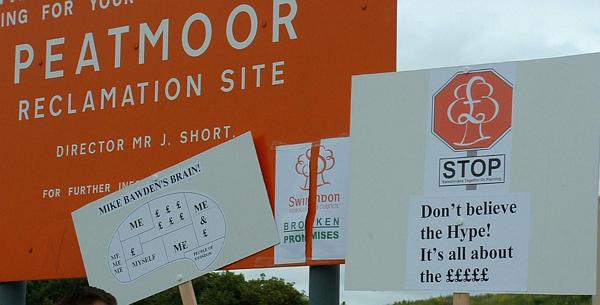 Placards at entrance to Shaw forest 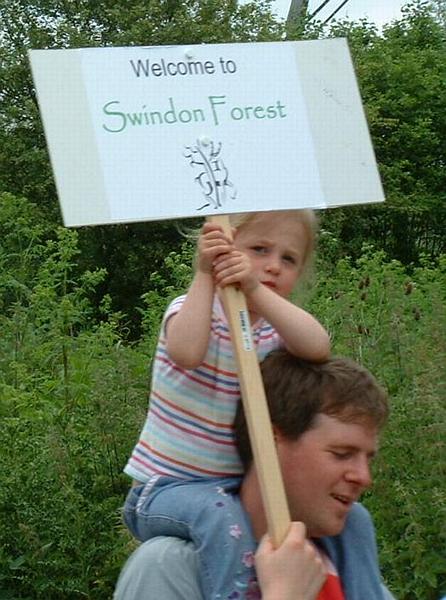 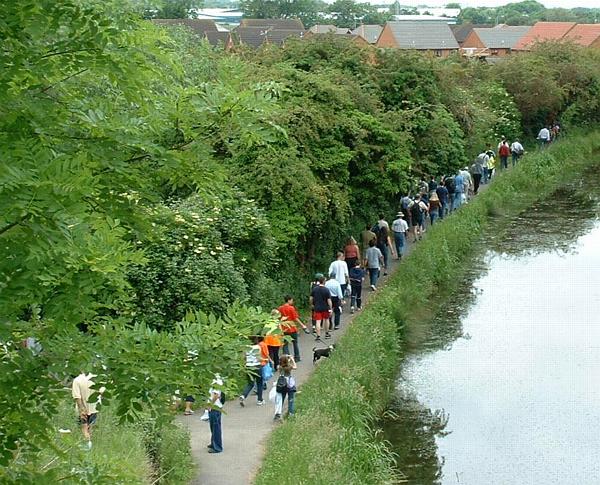 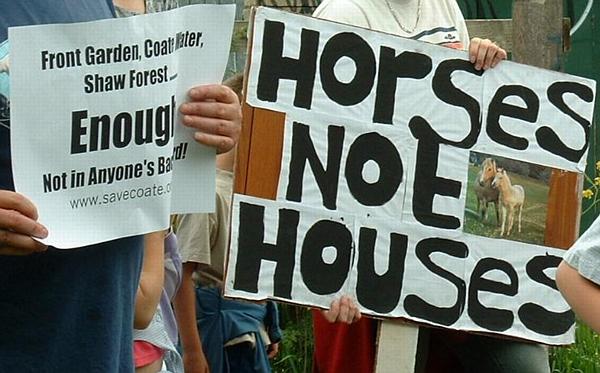 "Horses not houses / Not in Anyone's Back Yard" 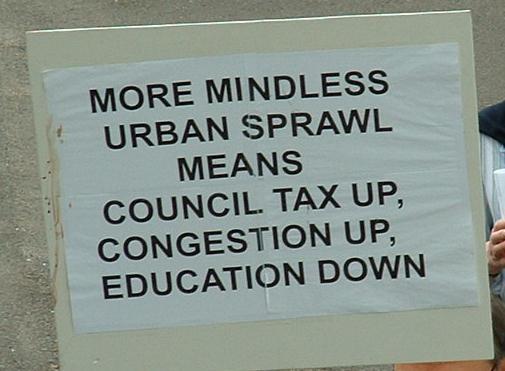 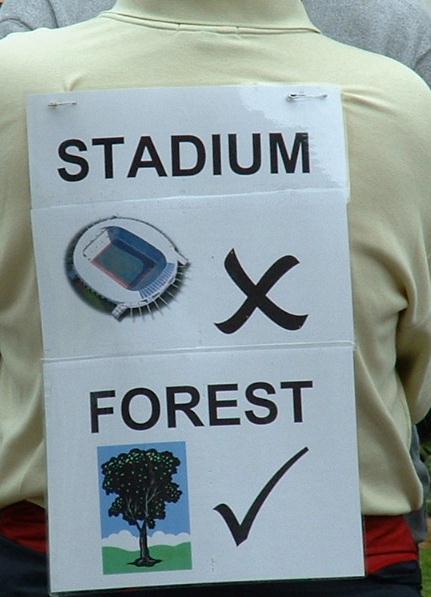 Speakers on the steps of Swindon Borough Council civic offices

Shortly after 10am, a couple of hundred people who had assembled at the Hillmead entrance to Shaw Community Forest set off through the forest and onto the River Ray parkway (also not-very-well-known as route 45 of the national cycle network). A report by mobile phone indicated around 150 people setting off from Coate Water Country Park at the same time.

Shaw Community Forest was re-designated as a community forest ten years ago, having been formerly used as a landfill site. At this time, the council promised that the area could not be built on for at least a century, due to the dangers of disturbing the waste buried there. After being capped with clay and topped with a metre and a half of soil excavated from the Northern Development Area, nearly half of the area currently accessible to the public has been planted with some 47 thousand trees, as part of the Great Western Community Forest scheme. Plans were announced in March 2003 to build a new football stadium and sports village on the site, which promptly ran into a whole raft of objections, on grounds of traffic, noise, wildlife, parking, broken promises, health and safety, environmental concerns and many more.

Coate Water Country Park was recently voted Swindon's Favourite Place. With its reservoir and woodland, it effectively forms a natural boundary to the south-eastern corner of the Swindon urban area. In October 2003, the council released a revised draft deposit of the local structure plan (the sort of dry document you only read if you're a developer or a planning consultant, or very dedicated) in which the entire chunk of land between Coate Water Country Park, the M4 and the A419 (known as 'Coate', not to be confused with Coate Water Country Park itself) has been re-designated for housing and employment use. The University of Bath are also very keen to build a new campus at Coate, having stated that if they are going to have a campus in Swindon, that it will be at Coate or nowhere. At present the area under threat is all farmland, with the exception of the Great Western Hospital (we were promised at the time that building the hospital would not set a precedent). Campaigners are concerned that development of this area would cause Coate Water to be surrounded by town rather than country, entirely changing its nature to the detriment of the local wildlife. It could even result in Coate Water losing its Site of Special Scientific Interest status. The Save Coate campaign are calling for at least a kilometre of buffer zone around Coate Water Country Park to be protected from development.

In a splendid example of good timing with good symbolism, the two groups of marchers arrived within minutes of each other at a watering point set up by the Front Garden Action Group (FRAG), on the bridge where the Old Town railway path crosses the canal.

The Old Town railway path, which now also forms part of cycle route 45, runs along the northern edge of the area known locally as the Front Garden, although referred to in the jargon of the Local Structure Plan as the Southern Development Area. Much of the Front Garden is unsuitable for building due to its location on a flood plain (although the debate is still ongoing about exactly what counts as a flood plain and how that will change with the effects of climate change). The area also contains valuable wildlife habitats. Campaigners from FRAG insist that the battle to save the Front Garden from development is not yet lost, although when deputy Prime Minister John Prescott visited Swindon recently and was challenged over the Front Garden development proposals, he revealed the fact that he hadn't even heard of the issue.

After a short rest, the combined march set off again along the canal towpath towards the town centre, where they met up with members of the New Mechanics Institution Preservation Trust, for the final leg of the walk to the civic offices.

Assembling in the car park at the front of the civic offices, under a metaphorical banner of the embryonic STOP (Swindonians Together On Planning) alliance, the marchers who now numbered around a thousand (unofficial estimate) listened to speeches from the steps of the main entrance. Representatives of the Swindon Forest Protection Group, the Save Coate campaign, the Front Garden Action Group and the Swindon Civic Trust, and Swindon South MP Julia Drown addressed the rally.

Martha Parry of the New Mechanics Institution Preservation Trust spoke of Swindon's history and heritage. Although there has been a settlement at the current location of Old Town for many thousands of years, most of Swindon was built since the industrial revolution, when Ismbard Kingdom Brunel chose it as the location for a major engineering works for the Great Western Railway. Swindon started to grow very quickly, but it was properly planned - as well as the railway works and houses for the workers, all the other services, facilities, recreational and social spaces which are needed for a sustainable community were also built. Although some may say that Swindon has no heritage, being much newer than other towns or cities which were founded by the Romans or earlier, Martha pointed out that in fact Swindon has crammed a lot of heritage into a shorter space of time than the more ancient towns.

In the post-railway era however (the railway works were closed in 1985 and have now been replaced by a 'designer outlet village' and some high-density housing), planning and development seems to be driven more by the desire to fill the pockets of the rich and powerful than by the needs of the community. Hence miles of sprawling housing estates with no character, huge retail park developments instead of local shops, a bus service which is only used by non-drivers and the environmentally devout, and a car-orientated town which wonders why it keeps getting stuck in the traffic.

This march and rally demonstrated to those who direct the planning process, and those councillors who represent the people of Swindon inside the council chamber, that the expansion of Swindon must be reigned in, at least until such time as all the infrastructure problems caused by decades of rapid and poorly-planned growth can be resolved, and Swindon can operate in a sustainable way which provides for the needs of the entire community.

At a public meeting of the Save Coate campaign on 11th May which was attended by members of other campaigns and organisations, the concept of 'reverse NIMBYism' was identified, being the tendency of local councillors when faced with a vote on a controversial development proposal outside their ward, to support the development regardless of its individual merits or failings, rather than risk it being declined and later proposed in THEIR back yard. This cannot possibly form a basis for sensible and sustainable planning and development. Only by forming alliances between campaigners across the town, can this tendency be defeated - this is the aim of the STOP alliance, although it remains to be seen exactly what form this alliance will take.

E-mails to Swindon Link magazine about the stadium proposal
for:

E-mails and text messages to the BBC about the plans:

Tour of the community forest in pictures:

"City for the 21st Century"? or how big business and the planning system threatens to destroy the quality of life in Swindon and worsen social inequality

Plans to turn the Mechanics' Institute into a modern glass hotel are branded 'cheap and tasteless':

http://www.swindonlink.com/
(The publisher of Swindon Link had the same idea as me, of being a cycle-mounted photojournalist, so we kept turning up at the same strategic photo locations along the route)