A stall and street theater in Cambridge against the G8. 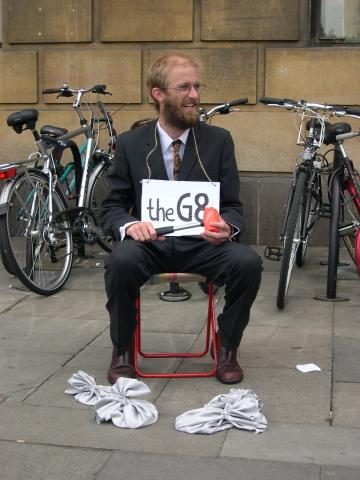 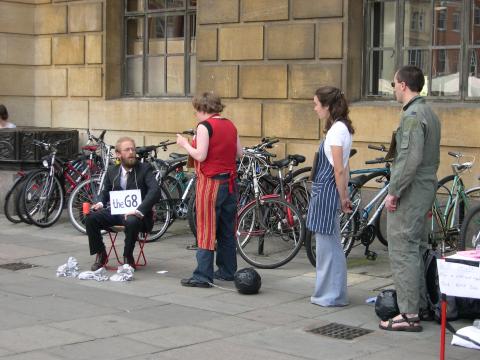 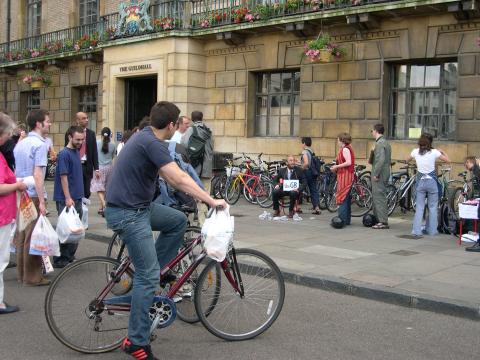 A group of Cambridge activists set up a stall in market square today to distribute (counter-)information about the G8. The meeting of the leaders of the eight most industrialized nations is taking place in Georgia, US. They will be discussing how to continue their economic and military hegemony and exploitation over the rest of the world.

To attract the attention of passers-by, four of the activists participated in a 'guerrilla theater' performance: One of them representing the G8, in a suit and surrounded by sacks of money, was listening to the other three playing the role of exploited and impoverished people around the world. To questions such as "I am unemployed because of your economic policies" he would reply, "it is because of trade unions that do not allow me to employ you for less money!". The satire was very well received by Cambridge people, many of whom stood by to watch for some time, and happily took leaflets about the G8 and signed postcards to cancel developing countries' debt. A lot of laughing could be heard when the G8 actor was saying things like "you are poor because you are complaining instead of working!".

A discussion has been organized later today to present who the G8 are, and the impact of their policies on people around the world.