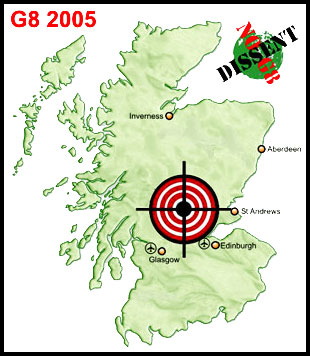 Pagan Maypole Block plus the "Wall of Morris Dancers"
Not seen since the Mayday 2000 Guerilla Gardening Action when the army was put on standby to deal with this traditional pagan pastime, the Maypole Block will surround the G8 with a specially placed network of magically alligned Maypoles - weaving their magic with dance, they will reactivate ancient ley-lines to render the evil energy of the G8 Red Zone fences inert, backed up by seperate gatherings at Stonehenge and Avebury that will channel the land's ancient celtic energy, making it available to all other blocks who will be instructed how to take full advantage of its power.

While Italy had the White Overall Tutte Bianchi, in 2005 we will aslo have the "Wall of Morris Dancers"! Importing a frightening brand of pagan style hocus pocus, this is an extremely worring development for the forces of darkness.

Recent additional intelligence gained at an International Security Meeting in Savannah, suggests a Break-away Braveheart Block of celtic crazies are planning on pouring down from the hills, painting everything blue, and taking control of the borders.

The Cricketers Block
Padded up and fuelled by cucumber sandwiches, squads of 11 will knock the G8 for Six. Driving way over the boundaries they'll bring a lazy summer afternoon vibe to the frontline... Will they be out for a duck, or will they stump the opposition? First seen in London Mayday 2004, this outing was simply a red herring PR stunt.

The White Collar Block
Led by the crack Bowler Hat Brigade, suited and booted, the oppressed office workers are expected to be armed to the teeth. To a casual observer those umbrellas and briefcases may look like innocent tools of capitalism, but in the hands of a corporate journo they morph into a frightening brand of european terror tactics, as a rag tag army armed with spears and shields get set to create a lunchtime bloodbath.

The Blue Blood Block
Have apparently pledged to add their weight to the street blockades, however a question remains over whether they will sign up the the PGA hallmarks or the Anti-capitalist principles of unity. The youth wing has however signed up to all available hallmarks, bought the t-shirt and agreed to face down the pig cavalry with their newly formed Radical Pony Club leading the charge with the Silver Spoon Gymkana Block.

UK Urban Kebab Block
The full atmosphere of Friday nights in any UK city centre will be recreated in a 'avin it large style. Watch them go as they chant "Here we go, here we go, here we go" and then render the streets unpassable with a volitile mix of piss and puke.

The Self Preservation Society Block
Veterans of the italian job, these folks earned their stripes amongst the pizza parlours of Genoa, dodging overlong consensus meetings and trying to pick up the local talent. Don't be fooled however, their rat like cunning and true fashion sense will see them blowing the doors off a whole new can of pasta.

St Trinnians Block
More old skool retro madness as the anti-war schoolgirl block takes to the streets and distracts the boys in blue. Charming and disarming? With jolly hocky sticks flying there'll be lashings of flour bombs and ambushes behind the bikesheds.

Vampire Block
Terrifying hordes of newspaper sellers will harry the G8 delegates at every move. The Old Left zombies will surround the conference centre and erect hundreds of paste table blockades, all chaired by the same five uber-demons. Having prepared feverishly for over a year they will lead over 100,000 foot soldiers to a glorious victory marching in completely the opposite direction to the G8 conference to listen to five hours of speeches culminating in an evening concert with Billy Bragg.

RTU Street Party Block
Reclaim The Unions are rumoured to be promoting yet another frightening brand of continental politics, where Unions actualy mean something and work on behalf of their members, fighting for a better world. For the G8 they are expected to make links with other unions around the world and call for decentralised demonstrations across the globe. In the UK they will lead a massive international union march, blockading the main routes to the Gleneagles Hotel.

Back to '94 Block - "The CJB Renunnion Rally"
The Mythical Forces of HayDay are gathering to even the score - what score? HARDCORE! The CJB Reunion Rally will see the G8 conference centre turned into a psychedelic mess of bunker barricades and DIY dancefloors as the surrounding trees are occupied and retro-rockers lock-on to bass bins. Make no mistake, if this gets out of hand, it'll be messy...

Remember, always believe everything you read in the media...