IRISH ACTIVIST BEGINS 14-DAY HUNGER STRIKE IN APPEAL FOR C.R.H. TO DIVEST FROM ISRAELI COMPANIES AND TO CEASE COMPLICITY IN  HUMAN RIGHTS VIOLATIONS 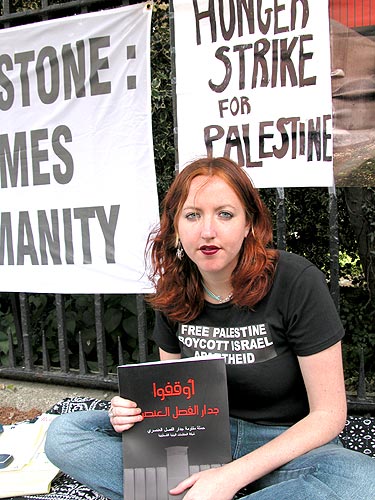 IRISH ACTIVIST BEGINS 14-DAY HUNGER STRIKE IN APPEAL FOR C.R.H. TO DIVEST FROM ISRAELI COMPANIES AND TO CEASE COMPLICITY IN  HUMAN RIGHTS VIOLATIONS

Irish activist Caoimhe Butterly today began the first day of a two-week,
water-only hunger strike outside of Cement Roadstone Holdings in Fitzwilliams
Square. The hunger strike has been initiated in an attempt to focus attention
on direct Irish complicity in the construction of the Apartheid Wall, which
violates International Law and contributes to grave human rights violations of
the Palestinian people. C.R.H. own a 25% stake in the Mashav Group, an Israeli
holding company for Nesher Cement, who is the sole provider of cement in
Israel.

Amnesty International recently stated that “ C.R.H., through it’s subsideries
Mashav and Nesher is likely to be providing the raw material of the
fence/wall..if so, it would contravene the U.N. norms on the responsibilities
of Transnational Corporations and other Business Enterprises with regard to
Human Rights(2003).”

The Apartheid Wall, which is 8 meters high in some places is responsible for the
de facto annexation of over 50% of Palestinian agricultural land. Although the
Israeli Authorities attempt to sanitize it’s construction by referring to it as
a “security” or “defensive” measure, it has been repeatedly condemned
internationally as a land grab and further solidification of a system of
apartheid. Close to 90% of the Wall is being built on Palestinian land inside
the West Bank, not on the Green Line. It cuts off families and communities from
each other, separates farmers from their land and cuts off Palestinians from
their places of work, schools, health care facilities, places of worship etc.
The Wall poses unprecedented restrictions on Palestinians’ movement within
Occupied Palestine. Palestinian activists and farmers have also been killed or
wounded while demonstrating against it’s construction .

Caoimhe Butterly states, “It is shameful that an Irish company should profit
from anything that is as immoral ,unjust , and destructive as the construction
of this Wall. This fast is being initiated as an attempt to pressure C.R.H. to
divest from these companies. It is the only moral option.

At a time when the Israeli Occupation forces act with increasing impunity in
their violent humiliation and brutalization of the Palestinian people, Irish
civil society must take a stand. Despite International support for the
suspension of the Trade Association agreements between the E.U. and Israel, the
Irish government- in it’s term of presidency of the E.U.- has refused to get
off the fence and endorse the growing calls for their suspension. In this
vacuum of any dedication on the part of our government to advocate for genuine
self-determination, and basic human rights, for Palestinians, companies such as
C.R.H. continue to profit from the Occupation. Consumer boycotts and sanctions
contributed greatly to the isolation of apartheid South Africa. 21st-century
Israeli Apartheid must be isolated in the same manner and the courage of the
growing popular resistance to the Wall , in Palestine, must be matched by an
upping of the ante on the outside, too.”

Joining, visiting or supporting the fast are a number of activists and
politicians which include Dennis Halliday, former humanitarian co-ordinator  to
Iraq, Tom Hyland, Senator David Norris and Nuria Mustafa.

There will be a constant, 24-hour presence- with candle-lit vigils at night,
from the 10th - 24th of June.