Sea Island G8 arrestees still in custody! How we can help them.

On Thursday June 10th 15 people were arrested in Brunswick (GA) after refusing to disperse. The majority of them has not yet been released and they are not receiving medical attention despite injuries due to prolonged sun exposure and other lesions. Others were later arrested at a jail-solidarity demonstration outside the Glynn County detention center on Friday and charged with criminal trespassing. 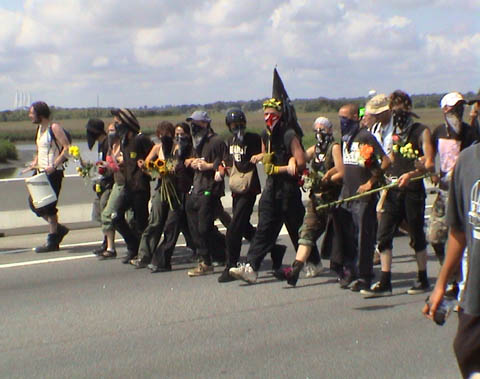 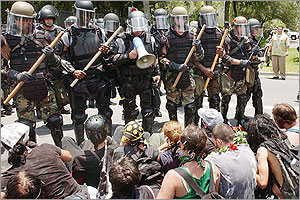 Demonstrators sit at the gates of the summit's red-zone and demand to see G.Bush 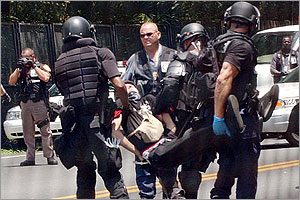 A young protester is carried away by unmarked robocops

http://atlanta.indymedia.org/otherpress/display/470/index.php
Videos of the 3 days of protests om Brunswick :

18 people have been detained in Brunswick Ga. related to the no G-8 demonstrations.

5 females, 13 males. 17 were arrested, one male was questioned and released by INS.

The arrests took place at the epilogue of an unexpected and unauthorized breakaway spanning over 9 miles, which was initiated by a group of about 25 young anarchists during the scheduled March For Palestine. Many others from the march followed those who started the breakaway. Several marchers had to seek medical attention for symptoms of overheating, dehydration and heatstroke. In many instances along the entire route, those who had to sit down to rest were ordered by the accompanying law enforcement to "keep moving". The breakaway was "escorted" by thousands of police and army personnel until it ended at the gates of the Sea Island red-zone, where exhausted demonstrators sat on the ground and refused to move claiming they had a lunch appointment with G.W. Bush and the world leaders.

15 were detained on Thursday at the breakaway march to St. Simon's Island, 3 female, 12 male. They are charged with Disorderly Conduct.

2 (one female, one male) were detained at the court house on Friday after the hearing for the first set of arrestees. They are charged with Criminal Tresspass.

1 female was arrested later Friday evening at the courthouse, and was unrelated to the first 2 courthouse arrests. She is also charged with Criminal Tresspass.

4 females and 3 males have bailed out. There are currently 10 people remaining in jail, 8 John Does, and one Jane Doe. The Does have an additional charge of "giving false information" (which is not the same as not giving your name) and are facing increased bail amounts.


Glynn County Sherrif's Department is blocking people who will not give their names from filling out visitor's request forms. The Sherrif's Department is also giving out inconsistent information about visiting times and days for the person who has given his name.
They are getting 2 meals per day on the weekends. All are getting vegan meals, but the vegan meals are small. They are now getting water. The injured John Doe still has not received medical attention for his injuries. He has sunburn, facial bruising and lacerations, and has lost sensation in his fingers.


There will be a vigil tomorrow in front of the jail at 2pm. Reynolds St. between G & H streets.

Email: j8legal (nospam) ladygalaxy.org
Phone: 912-267-1624 11 Jun 2004
The J8 Legal Collective needs $500 in the next 72 hours to continue supporting the 18 arrestees so far.
The J8 Legal Collective has an urgent need for donations. There have been 17 arrests in Brunswick thus far, and law enforcement has now intimated that they want demonstrators to leave town. Because of these arrests and the courageous decision of many of the arrestees to resist their unjust arrest by withholding their identities, there will be a need for a continuing legal presence. Our initial resources for setting up an office, paying for phone and power, etc. have run out, and many of the volunteers have had to dip into their personal funds. In order to continue functioning, we need to raise $500 in the next 72 hours to pay for power, water, gas, and phone bills. The phone bills are anticipated to be high as a result of the expense of collect calls from jail. Thank you so much for your continued support as we work to support these activists in their exercise of First Amendment rights. Please keep in mind that any donation, however small, will help us a great deal. Information on the process for making donations can be obtained at