Last month it appears Tony Blair's daughter Kathryn tried to commit suicide. According to my sources the combination of pressure over father Tony's warmongering at school, parental neglect and general exam stress were behind the bid.
Various commentators have noted a shift in press reporting of Blair's chances of remaining as party leader since the news blackout on this story. 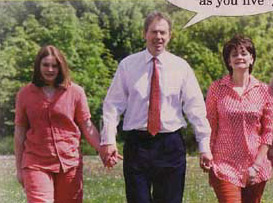 On or around Thursday 13th May 2004 Tony Blair's 16 year old daughter Kathryn attempted to commit suicide. She is in the middle of exams, believed to be GCSE's, and took an overdose of unknown pills. She was rushed to hospital and a news blackout was requested by the PM's office and adhered to by the British Press.

Katherine is believed to be studying at the Sacred Heart school in Hammersmith, West London, a Roman Catholic state secondary school. News about the suicide attempt was confirmed by Alan Johnson, Labour MP for West Hull and Hessle.

So, was this a sudden pang of concience from the British tabloids over sensitive reporting of the PM's family? Or the establishment press (yes even the tabloids are owned by the establishment) kow-towing to protect the flagging public image of the most disasterous Prime Minister this country has ever seen just before local/European elections?

In a democracy, the public have a right to know about the family failings of anyone in public office - it enables them to judge whether to vote for that individual or not. When that failing family is the Prime Ministers the press have a duty to inform the public - not to protect politicians' images from public scrutiny.


If you're thinking of posting a comment please refrain from the 'I don't care' type. This is a serious issue of censorship and how a young woman's cry for help has been ignored to protect her war crimes suspect dad. [Tony G]