A Week Of Resistance to BP And Big Oil

A week long Exhibition of Resistance to BP and Big Oil, and the corporate hijacking of the arts is now under way on in London. A space has been squatted specially for the event [Photos]. The address is 50 Chalk Farm Road, Camden.

Update Tuesday 22nd: Another protest was called on Monday night during the BP sponsored awards ceremony at the Portrait Gallery. As protestors were gathering at around 7pm, four London Rising Tide activists chained themselves across the front door effectively shutting down the National Portrait Gallery. It was also announced that the alternative exhibition has been extended for a week, and it is now likely to be open until Saturday 26th June in the squatted gallery.

On Wednesday 16th climate change activists and artists held a 'Greenwash or US' Street Party outside BP HQ, many carrying artworks revealing a true portrait of an oil company. The street party then marched to the private view of the BP sponsored National Portrait Gallery Awards. When protesters tried to move towards the entrance of the National Gallery, police rapidly moved in and pushed people back. In the resulting scuffles one person got arrested for "not moving" [video of the arrest] The party then continued for several hours without any more incidents, and later in the evening it was followed by the opening of the art exhibition at the squatted venue [Report | Photos of street party].

Over the weekend, there will be daily workshops and events in the exhibition space as well as on the streets. These will include speakers from West Papua and Colombia, a Jam Night, film night, and lots of other fun stuff such as painting, subvertising, guerilla cinema, radio, food and discussion. See Programme of Events. 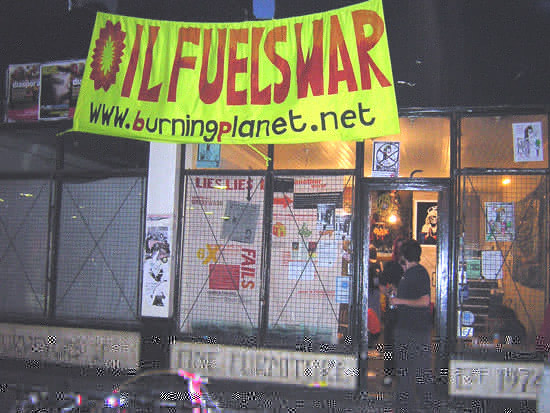 'Exhibition of Resistance to Big Oil and the Corporate Hijacking of 'the Arts': street protest & gallery report, Wednesday June 16th 2004

London Rising Tide and friends were on hand on Wednesday night to greet visitors to a (very) private view of finalists of the BP-sponsored National Portrait Award. Earlier they had made their way from BP HQ in St. James' Square, many carrying artworks revealing a true portrait of an oil company. There most set up across the street (after one arrest outside the gallery and strong police orders to cross over), leafleted passers-by and checked out the live sounds of David Rovics and the Rub through the renewably-powered bike sound system and enjoyed the early evening smog.

As the great, the good and the occasionally struggling queued to pass security and pass into the hallowed National Portrait Gallery portals to hang with the exhibits and quaff fine wines, they were assailed by an intimidating array of NPG guestlist handlers, NPG security, BP security, sub-contracted-to-BP-security and sub-contracted-to-BP Met Police. Dodging between all that lot handing out thought-provoking, non-judgemental (to poor artists) leaflets were various art-not-oil folk. One joker in pinstrip suit, polka dot tie, end-of-the-world explosive red shirt, BP baseball cap and face painted to reflect the 2 faces of BP (ie. greenwashed vs. actual) was wearing a picture frame around his face, handing out leaflets, entertaining and/or infuriating the authorities and having his picture taken by bemused Singaporean and Californian tourists. He invited these last to take his picture with the conveniently on-hand police photographer, who grinned thinly and bore the imposition while sadly refusing to trade his 'police photographer' cap with the joker's own prized BP cap.

At least three potential private view schmoozers were so impressed by the anti-BP arguments that they refused to cross the climate chaos picket line and spent the evening instead at the newly squatted and fitted with oily-and-other-art gallery at 50 Chalk Farm Road, NW1. Others visited afterwards. This space was filled with art-with-attitude, activist types as well as passing punters answering the call of 'come get your free culture' from a 5 year old lad sitting on the shoulders of a 6 foot friend. Others were intrigued by the bright yellow 'oil fuels war' banner set up outside, (opposite a Safeway petrol station as it is, with Texaco up the road (where sympathetic Sri Lankans work) and Esso just a few yards in the opposite direction.

Speaking of local support, it's been excellent, with the Turkish kebab shop telling us more about their country after we mentioned the plight of Ferhat Kaya, a campaigner arrested and tortured there for mobilising opposition to BP's Baku-Ceyhan pipeline (www.baku.org.uk) We've also had free food and leaflets displayed in local caffs and local youth dropping in and contributing drawings on the walls between the images already stuck there. Another local guy wants passionately to put all the stuff online for all to see. We have an original work by Peter Kennard, whose work was banned by Orange at Christmas last year, with a Banksy piece on the way. And the FT plugged a beautiful portrait of BP-boss Lord Browne revealing his darker side to the world, which is hanging on the ground floor.

The Wednesday night 'this is not a private view' started at our space after festivities outside the NPG drew to a close and it was time to chill out and celebrate our own alternative visions not just rail at the sterile landscape BP has in store for us. The party went on loud and late with artworks being created, impassioned debates firing up, mad cackling laughter and the occasional glass of ale.

And there's another week left to come and check things out so you can tell your grandchildren you were there...