A funeral procesion was hosted by Ipswich Anarchists as an armed military march paralysed the market town's high street for several hours. 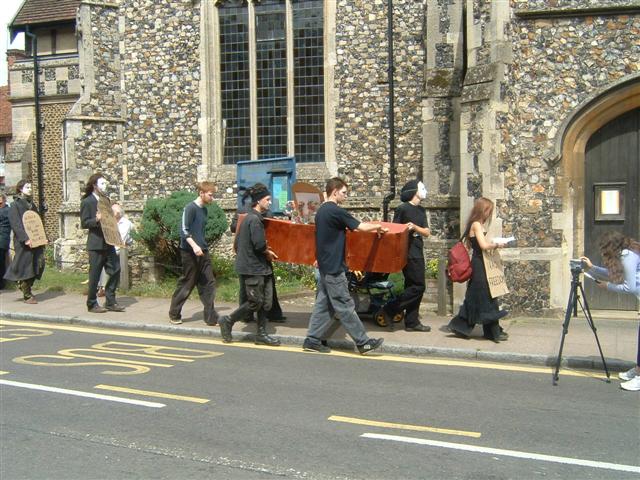 Needham council officials gave the freedom of the town to nearby Wattisham Army Airbase, celebrating their decision with brass bands, speeches and a flyover from the Red Arrows.

Generals, councillors and the highest of high society from across Suffolk came for the big day out.

In response, Ipswich Anarchists ran a counter-march before the main event, walking in a mock funeral procession past amused, enthusiastic and outraged faces, and handing out flyers.
A full size cardboard coffin formed the centrepiece of the march, and the group was followed by a procession of 'mourners'.

A floral wreath was laid showing the minimum number of Iraqis killed by the conflict.
After the march, a vigil was held at the community centre, where army personnel were holding the final ceremonies.

Although there were some snide comments, in general the rank and file soldiers were polite, and protesters received a surprising amount of support from some members of the police. They were also congratulated by teachers of the local middle school who had refused to take their students to see the march.