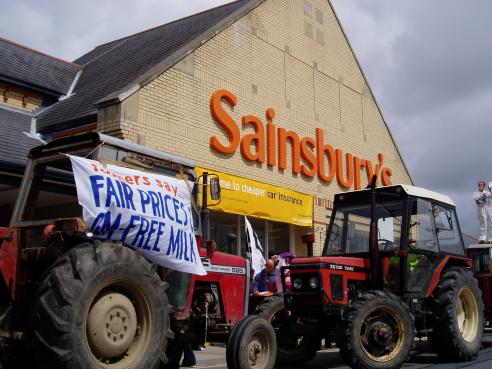 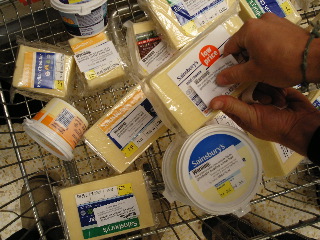 In a follow-up to yesterday's amazing Sainsbury's depot blockades [respect to you all], Devon farmers parked three tractors with banners in front of Sainsbury's in Barnstaple whilst shoppers labelled Sainsbury's dairy products as “produce of GM-fed animals”. This was probably our best ever supermarket action – with strong support from customers and the regional media and a very reasonable response (after initial panic) from the manager.

Before the action our tractors hid round the corner, where TV and radio reporters interviewed us about what we were going to do. Shoppers provided them with footage showing how to do their own labelling of the GM dairy products that Sainsbury's have forgotton to label (pic). The tractors entered the car park by different routes and were positioned directly under the Sainsbury's sign in about 45 seconds, then were decked with banners declaring: “Farmers say: Fair Prices & GM-Free Milk” (pic). Local farmer Hector Christie climbed on his tractor roof and addressed shoppers through a megaphone as another 25 campaigners – and a pink cow - surveyed shoppers (90% agreed that GM feed should not be used and that small farmers deserved better prices from supermarkets) and handed out the new leaflet from the farmer and activist alliance:

The manager initially explained that protests could only be held with advance appointment and that we would have to leave and arrange with them to come another day. We told him that that would be rather inconvenient and we would have to stay. When we were told that the police would be called we explained that the TV reporters outside would find that most exciting – at which point they changed their minds. After we gave the manager our press release (below) and media coverage of the national depot blockades he disappeared for 40 minutes to talk to head office. He then invited two of us to discuss the issues with him.We explained that stopping using GM feed would be good PR, good for sales and would fit with their policy of selling more organic and local food. Also it would mean we could go and harass Tesco instead. Whilst he said he could not possibly comment, it seemed clear he agreed with us. We thanked him for a most enjoyable protest and left after two hours. A fluffy day out for all the family – highly recommended.

Robert Vint, co-ordinator of Genetic Food Alert, said “Farmers and shoppers are both being exploited by Sainsbury's, who are making an outrageous profit, are failing to inform customers and are failing to listen to their demands for GM-free food”

Sky McCain, Director of the Wholesome Food Association, said “Small farmers and their families deserve a decent livelihood. You and your family deserve good health. Say NO to GM animal feed and supermarket greed”

The protest came just one days after other members of the alliance paralysed Sainsbury's national milk distribution system in protest over the same issues. The alliance developed because environmental groups realise that sustainable agriculture in the UK depends upon the survival of small and family farms, whilst farmers realise that their best hope of flourishing is to provide the GM-free products that the public want to buy.

NOTES TO EDITORS:
1. Sainsbury's promised in 2001 to “phase out the use of GM feed to the animals which produce their meat and dairy products”. They have still not given a deadline by which this will happen and do not label their dairy products as coming from GM-fed animals.
2. In recent years milk prices in supermarkets have risen to about 29p a pint – whilst their suppliers pay farmers about 5p a pint – less than the cost of production.
3. Marks & Spencer and the Co-op have stopped using GM feed.
4. The alliance of farmers, consumers and food campaigners includes: Farmers for Action, the Small and Family Farmers Alliance, the Small Farms Association, FARM, the Wholesome Food Association, the Institute of Science in Society, Genetic Food Alert and the Genetic Engineering Network.
5. For the national Sainsbury's blockade story see:

http://indymedia.org.uk/en/2004/07/294251.html
5. Professor Bob Orskov, OBE, Director of the International Feed Resource Unit (Aberdeen) has said “As a scientist, I wouldn't drink milk from cows fed GM with the present state of knowledge”. There have still been no independent long-term study of the effect of GM feed on cattle or of the effect of milk from GM-fed cows on humans. There is no liability legislation to compensate victims if harm is caused.

In 1999 the UN Food and Agriculture Organisation (FAO) reps from every African nation jointly condemned Monsanto's efforts to force GM on Africa. Monsanto urgently called on PR company Burston Marsteller to tackle the crisis. The advice to the whole industry was never to admit that African farmers and leaders opposed GM and to pretend that all the opposition originated from white, middle class Europeans - specifically Greenpeace - who were happy for African babies to die in the interest of their extremist ideology. The biotech industry and their allies have since then blamed every anti-GM protest in Africa and every protest by peasant farmers on Greenpeace. Sainsbury's are now pretending that the joint farmer and activist blockade of their depots was arranged by Greenpeace - see emailed statement below. Greenpeace seem impressed by the action but have had to tell dozens of journalists who called them that this was completely independent from them...

Parveen.Johal@sainsburys.co.uk]
> Sent: Monday, July 05, 2004 2:06 PM
> Subject: Statement
>
> We're disappointed that Greenpeace has chosen to target us when this is
> clearly an industry issue. Overall all of our depots have responded very
> well in ensuring minimum disruption to service. Our milk does not contain
> GM ingredients. Milk is highly regulated and like all supermarkets, we are
> subject to stringent food safety controls. Our milk is sourced from
> British dairy farms that supply other UK supermarkets, like Tesco and Asda
> - as well as hotels, schools and hospitals. The Food Standards Agency has
> categorically stated that there is no evidence that milk from animals fed
> on GM crops contains any GM material.
>
> To offer choice to our customers, we have launched a new milk from cows
> fed on non-GM feed which is now in over 100 stores.

STORE URGED TO SELL GM-FREE ONLY

Supermarket giant J Sainsbury has been urged to commit fully to selling
products from animals that have not been fed GM products. Westcountry anti-GM
campaigners have called on the firm to continue eliminating GM ingredients
from all food products. In 1999 the company announced that it was eliminating
genetically modified ingredients from its own-brand products, and that it
would then look at the presence of GM material in animal feed. Sainsbury's
said it would be actively seeking ways of addressing this issue with
suppliers and processors.

Last month, the multiple retailer launched a new milk from cows whose feed is
guaranteed to be GM-free.

Among those demanding Sainbury's becomes GM-free is North Devon
environmentalist and anti-GM campaigner Hector Christie. In a personal letter
to the Sainsbury family, Mr Christie said he had recently taken part in a
protest at Sainsbury's store at Roundswell, Barnstaple.

"Marks & Spencer and the Co-op both sell non-GM fed meat and dairy as
standard," he said. "Our message to Sainsbury's is a positive one - they
could be the first of the remaining big three supermarkets to refuse produce
from animals fed on feed that contains GM ingredients."

The company said that the new milk would initially have a limited supply which
would be increased to match demand.


Barnstaple's Sainsbury's store was targeted by protestors against milk produced by cows fed on genetically modified food. Estate owner and farmer, Hector Christie, who played a key role, said: "Certainly the reaction from the public was very positive."

A spokesman for the company said that cows producing Sainsbury's standard range of milk could be fed on GM food. But she argued that there was no evidence to suggest that milk produced by cows fed on GM material itself contained any of GM traces.

She said: "We are disappointed that Sainsbury's has been targeted when this is clearly an issue for the whole food industry."

On the same day, the company launched a new milk from cows fed on guaranteed non-GM feed.