A report of the second annual Peace in the Park free festival in Endcliffe Park in Sheffield.

Banner below the main stage 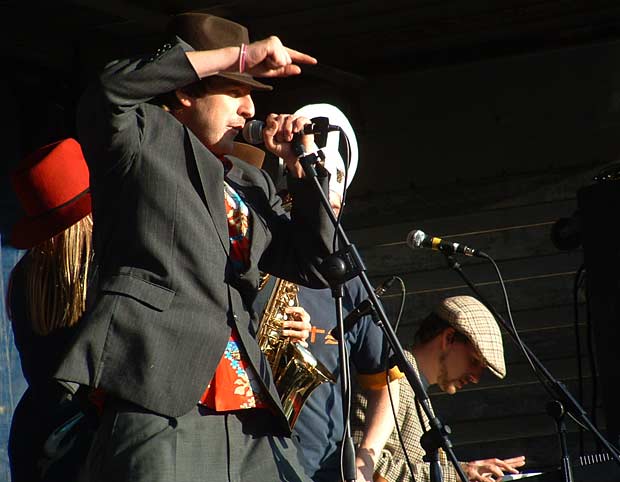 One of the bands on the main stage.

Lots of people having a good time. 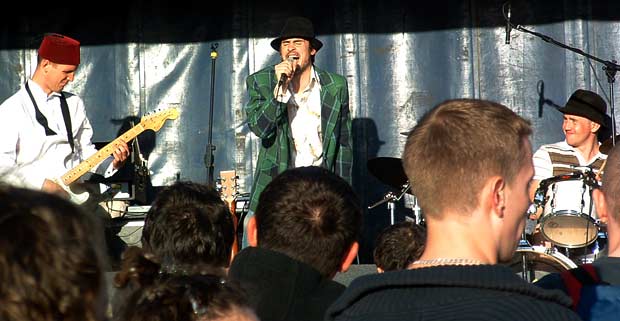 The Indymedia stall was busy all day.

I was a bit dubious about moving this years Peace in the Park from last years city centre location at Devonshire Green to this years one in Endcliffe Park near Hunters Bar. However the different venue was a good choice and this years event exceeded my expectations in almost everyway. The much bigger venue meant that there was no sound clash between the main stage the dance tent and various other sound systems and Endcliffe Park is just a much more pleasant space in everyway to Devonshire Green.

Unfortunately the day was marred by the weather. It was mostly pretty cool and cloudy with occasional brief showers earlier on and this must have put quite a few people off from going. Last years event was in blazing sunshine.

One thing that could have been better was a few more food stalls. The only decent food I could find was the stuff provided by the New Roots in the Democracy cafe and that ran out fairly early on. Food stalls are the most profitable stalls at events like these and if people get hungry they are likely to drift away from the festival. This was also true of last years Peace in the Park so it was a shame to seem the same mistake again this year.

All in all though it was good event and it seemed like a lot of people put a lot time in to make it happen so thanks to everyone for all the effort.

shame i missed the event has had other commitments. was a bit pissed to see the event moved to the safe, leafy suburbs and away from its urban base (even tho the middle class are moving into the devonshire qtr!). why not try having the event in an area where there are real social issues and not wealth such as firth park, longley park etc...

mmm... better in your own back yards i bet away from the backwards poletariat... think about it!!!

I thought peace in the park was wicked bad and that the location was good since it was quite central to alot of sheffield. PS new roots is the best, who else wqas jamming in the riddminton tent?

mmm... the event was definatly central to peeps who live in their leafy suberbs!!! what about making the event central to the council estates... oh! sorry we want nice polite - educated people...

if peeps are up for unity go to a local carnival over the summer or the mela at leeds (you will find peeps of all races, religions and classes!) and not some event that has turned into a middle class shindig! oh... lets pat ourselves on the back... tally ho!

Don't be so cynical

Interesting point Watcher but I think you are being overly cynical. Of course people organise events close to where they live rather than invading other communities space and I don't think there is anything wrong with that. If people organised a festival in another community just so they could make them 'see the light' I think that would be equally problematic.

I suspect the reasons for Endcliffe Park have much more to do with space than because they want "nice polite - educated people".

However Devonshire Green is a fairly neutral space because it's so central. So in terms of making a point and engaging a wider variety of people it probably is better than Endcliffe Park. Having said that the space issue was definitely an issue at last years Peace in the Park though.

Something to think about for next year - if there is another Peace in the Park.

Next year instead of carping about it, why don't you actually attend the festival, or even better, give us the benefit of your urban working class values at the organisation stage!

Endcliffe Park was chosen because the space was big enough to house the festival successfully, with easy access etc. It was a big move up from last year, and the consensus of people actually attended seemed to be that it was a massive success.

In organising the open mic tent, a big effort was made to contact community groups and performers from all over Sheffield. I felt this was pretty successful. There were some 'middle class' performers, and some who were not middle class. There was also input from refugee groups. A genuine effort was made to make this festival 'multi-cultural'. There's always room for more diversity, however, and hopefully next year even more people will be involved.

You can't build this kind of thing overnight: it takes years to establish a community festival. Provided it's not derailed by certain people's inexplicable negativity and hostility, Peace in the Park will go on to involve more and more communities, entertaining each other. Bear in mind that we're only at the start of building htis festival: it's a good start.

Hi chris! Thank you for replying! Unfortunately i could not attend this years festival as i was at work (i know! but had a bit of time off recently - you know how it goes!). I do appreciate how much organising goes into events such as this and wasnt tryin top stab at that.

I aint trying to sound Classist when I discuss my annoyance at moving the event to a suburban area, just seems like moving it into peeps backyards,as thats where a lot of the movement are from! I thought/believe Peace in the Park was also about social inclusion.

There are many large parks in Sheffield,Don Valley Bowl (easy access for everyone!) Firth Park, Southey/Longley Park and Norfolk Park to mention a few! They also have larger open areas where there is real social deprivation. Our ideas/ideals are needed to be discusses in these areas and people bought together to build the movement in Sheffield and to keep the decay of the Fash outta Sheffield.

Also I know that an event cannot be built like this cannot be built overnight (look at Music in the Sun) a great festival that no loger exists, but that was down to community politics! If i am aware of organising meeting for next years events, i will be there!

But overall my point is valid about location - inclusion not exclusion!

that oak tree in the park..

Let's not hype up stuff here shall we people.. Truth is despite all the real efforts to raise dosh before the event to pay for the event it came very close to being pulled due to lack of dosh..

True it takes a lot of time and years to make events like this happen and work.. sad reality is that events like peace in the park are often organised by the middle class.. watcher is right..

However people like watcher are considerd to be negative because they're raising issues of class etc.. true we are all humans and it would be cool to see all people like this..

Something we must endeavour to do.. however we live in a class based world.. i do not see hedonism / politics changing this..

What i see changing is this, a community of people working collectively towards the revolution.. an evolution of everyday life..

Events such as peace in the park are a very minor role in this..

They help us build that community.. But lets not delude ourselves why it happened.. It was not as good as the hype (bullshit) been spoken here and on list..

We have to see how much was raised and i hope the organisers tell the rest of us this info..

Last years peace in park i feel was better becase it had more a focus on the political (although it lost money!) this years had nothing of the same vibe, energy.. Damm shame given the real effort put in by those who helped get this together.. i wish it was not just the few..

The more who help the better next years will be.. it will happen.. shit will be learned.. do you think glasto became what it has become overnight? It has taken years.. Thats how good events happen, a lot of time, love and trust.. Something that will take time in this fractured community of Sheffield..

One thing is sure, we will get there.. to this we need tolerance and understand that the views of watcher are just as welcome as people hyping peace in the park to the event it was not..

that oak tree in the park..