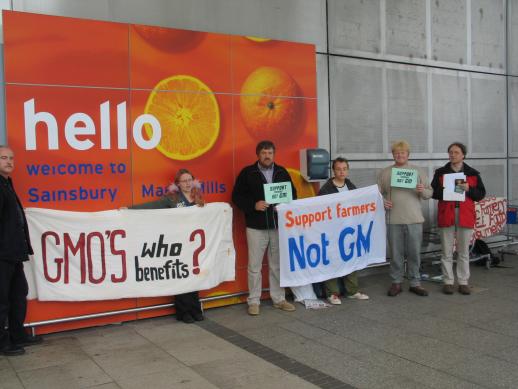 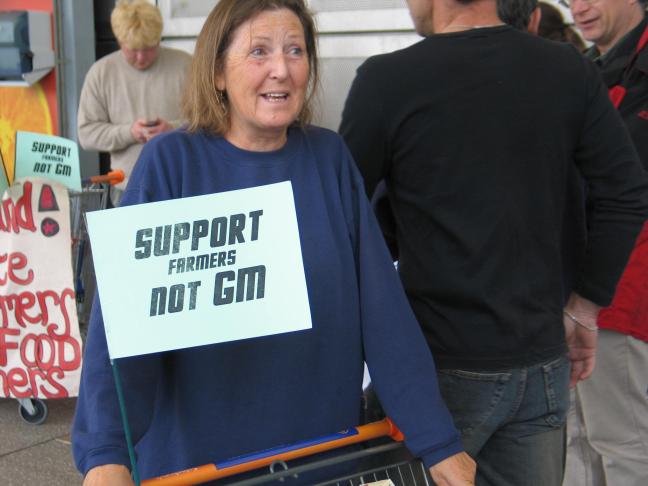 As militant cows, we would like to thank the 15 shoppers and farmers who demonstrated in the pouring outside Sainsbury's Marsh Mills store in Plymouth this Saturday. We cows get stuffed with untested GM bullshit yet recieve a pittance from the supermarkets in exchange. We say "cows unite – storm the aisles" – which is exactly what a fellow herd of cows did on the same day at Sainsbury's in Sherborne, Dorset (but we'll let them tell you about it themselves). Anyway, here's our press release and pics...

Farmers, consumers and food campaigners joined forces in Plymouth on Saturday to protest Sainsbury's policies on dairy products. They both want Sainsbury's to pay farmers fair prices for milk and to end the use of GM animal feed in milk production. Similar protests were held in Cardiff and Sherborne.

Farmers leaders Michael Hart [Small and Family Farmers Alliance] and John Sherrell [FARM] held up banners (see pics) at the Marsh Mills store in Plymouth, whilst other protestors, including members of Genetic Food Alert and the Wholesome Food Association surveyed shoppers, gave out leaflets and labelled products from GM-fed animals in the store. Shoppers strongly supported the aims of the campaign and participated by attaching flags saying "Support Farmers Not GM" to their trolleys whilst shopping.

Michael Hart said "Small and family farmers have been driven to the wall by the supermarkets. We want farm sustainably, to provide quality food and to avoid GM feed – but the supermarkets' pricing policies make this very difficult for us. It is vital that farmers and consumers work together to protect our food and our livelihoods."

Robert Vint, co-ordinator of Genetic Food Alert, said "Farmers and shoppers are both being exploited by Sainsbury's, who are making an outrageous profit, are failing to inform customers and are failing to listen to their demands for GM-free food. Our survey today shows that shoppers want an end to the use of GM feed and strongly support farmers' demands for fair payment". Phil Chandler of the Wholesome Food Association, said "Small farmers and their families deserve a decent livelihood. You and your family deserve good health. Say NO to GM animal feed and supermarket greed"

The protest came a week after other members of the alliance paralysed Sainsbury's national milk distribution system in protest over the same issues (see notes). Last week farmers parked three tractors outside Sainsbury's in Barnstaple. The alliance developed because environmental groups realise that sustainable agriculture in the UK depends upon the survival of small and family farms, whilst farmers realise that their best hope of flourishing is to provide the GM-free products that the public want to buy.
ENDS.

NOTES TO EDITORS:
1. Sainsbury's promised in 2001 to "phase out the use of GM feed to the animals which produce their meat and dairy products". They have still not given a deadline by which this will happen and do not label their dairy products as coming from GM-fed animals.
2. In recent years milk prices in supermarkets have risen to about 29p a pint - whilst their suppliers pay farmers about 5p a pint - less than the cost of production.
3. Marks & Spencer and the Co-op have stopped using GM feed.
4. The alliance of farmers, consumers and food campaigners includes: Farmers for Action, the Small and Family Farmers Alliance, the Small Farms Association, FARM, the Wholesome Food Association, the Institute of Science in Society, Genetic Food Alert and the Genetic Engineering Network.
5. For the national Sainsbury's blockade story see:

http://indymedia.org.uk/en/2004/07/294251.html
6. Professor Bob Orskov, OBE, Director of the International Feed Resource Unit (Aberdeen) has said "As a scientist, I wouldn't drink milk from cows fed GM with the present state of knowledge". There have still been no independent long-term study of the effect of GM feed on cattle or of the effect of milk from GM-fed cows on humans. There is no liability legislation to compensate victims if harm is caused.